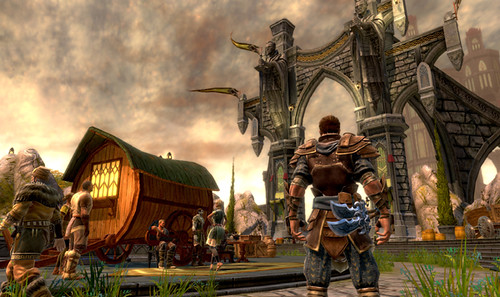 Twists of Fate cards in Kingdom of Amalur are like that of the Destiny Cards, one or more of your attributes will be increased when you’ll earn these cards.

The effect is permanent and not limited to time. You will earn these cards by completing different quests throughout the game. For more help on Kingdom of Amalur: Reckoning, read our Leveling Guide, Crafting Guide and Armor Sets Guide.

Kingdom of Amalur Twists of Fate

Preordering Twist of Fate
The players who had pre-ordered KOA Reckoning or the other editions will get an extra card as a bonus. It will be added once they log in to the server.

Demo Bonus
The players who had played the demo of the sequel will also get an extra bonus. Confident: “You follow your path with uncommon coolness and ease, rarely letting your situation suffer from extremes” – +5% Ice Resistance & +5% Fire Resistance.

House of Ballads
You will get a card by completing quest-line of House of Ballads. It only has a single Twist of Fate card, so it’s not dependent on the choices you’ve made.

Iconoclast: “You forever changed the songs of old by choosing to write your own history, and become the new ruler of House of Ballads” – +10% Damage with Faeblades, +6% Mana & +3% Chance to Steal 5 Health

Warsworn
The known Twist of Fate card earned during House of Warsworn quest-line is Truesworn: “By defeating Anru Besin and his Fahriangi atop Cloudcrest Mountain, you joined the ranks of the legendary heroes of the Warsworn” – +1 to Might Abilities, +10% Chance to critical hit vs Niskaru & +5% Stun Duration. Kill Anru Besin in the final Warsworn quest to earn this twist of fate card.

Forsworn: “By accepting the Niskaru Lord Khazamandu’s blessing atop Cloudrest Mountain, you became the scourge of Warsworn, rather than their champion.” – +10% Physical Damage, +1 to Might Abilities and +5% Fire Damage

Travelers
The Chariot: “The stuff of legends among the Travelers you use the shadows like now other, staying out of sight and mind… until it is time to strike.” – +1 Finesse Abilities & +6% Piercing Damage. Choose to stand by the Grim in the final quest of The Travelers to earn this twist of fate card.

Temperance: “Prudence is what’s important. Not bravado, not chivalry. Pragmatism is your ally in combat – – evading stronger foes and crippling them at their weakest.” – +1 to Finesse Abilities and +6% Evade Chance.

Disciplined: Imbued with the tempered ambition of Archsage Caledus, you are filled with a hardened resolve and feel capable of achieving any goal. – +5% Elemental Resistance and +1 to Sorcery Abilities.

House of Sorrow
Child of Autum: “You are the last member of the house of sorrows, forced to bear witness to the end of one of the oldest institutions in the Faelands” – +5% Elemental Damate & +5% Damage vs Fae. You will get this twist of fate card as a reward for completing House of Sorrow quest-line.

House of Valor
Undisputed Champion: “Despite all odds, you defeated the Champion of the Valor Arena and claimed the titles of Grand Champion as your own” – +5% Damage & +5% Damage Resistance. You will get this DLC twist of fate card after completing House of Valor quest-line.

Kingdom of Amalur Campaign
Unwritten One: “You are truly a blank slate, able to choose your own destiny, as witnessed and proclaimed by the High King Titarion himself” – +3% Experience Bonus & +5% Gold. Complete the quest ‘The Coming Storm’ to get this twist of fate card as a reward.

Unraveller: “You defeated Octienne and exposed his scheming thereby proving that unmaking the threads of fate is as important as measuring and spinning them” – 5% Experience Bonus. Defeat Gnome Octienne to get this twist of fate card.

Siegebreaker: “You changed the course of the war and defeated the Greater Niskaru, Balor. Songsa of your bravery and heroism will be sung for generations” – +4 Experience Bonus & +6% Damage. Kill Balor to get this twist of fate card.

Unstoppable Force: “The Guardian of Pride, the invinicble Dren fell before your indomitable power. You liberated the House of pride and opened the path to your final confontation with Gadflow” – +6% Physical Damage & +7% Gold. Complete the quest ‘Fall of Pride’ to get this twist of fate card.

Destiny Defiant: “You defeated Tirnoch and ended the Crystal War; the enormity of these events will resound throughout Amalur forever. As a result of your actions: the world is now free from the constraints of the merciless Fate” – +5% Damage, +5% Damage Resistance, +10% Mana and Health. Defeat the final Boss to get this twist of fate card.

Master of Gravehal: “Only the wisest and most influential warriors are called to rule upon the throne, and now you can count yourself among them, claiming your legacy as master of Gravehal Keep.” +10% Gold, +1 Persuasion, and +1 Mercantile

The Scion: “You have claimed the powerful blessing of Akara, the ancient being that has dwelled beneath the mysterious island of Gallows End since the dawn of time.” – +2% XP and +10% Elemental Damage

The Buccaneer: “By slaying the notorious pirate king Dead Kel, you have proven yourself cunning and resourceful, the master pirate hunter of the vast and treacherous Frostbreak Sea.” – +3% Chance to Critical Hit, +5% Physical Resistance, and -10% Equip Requirements

Beckoned: “You accepted the challenge of a mysterious voice: to bear a strange artifact into a hostile land and realize her will by changing the course of fate.” – +10% Damage while in Reckoning Mode

Herald Of The Gods: “By raising the Hyperian, you are the weaver of Idylla’s fate, and the shaper of destiny for all of the Kollossae for ages to come.” – +2% Experience Bonus and +5% Bleeding Damage Resistance

Trailblazer: “You so thoroughly explored the Teeth of Naros that no inhabitant is foreign to you, no path unfamiliar, and no secret hidden” – +1 to Finesse Abilities and + 5% to Piercing Damage

Found anything missing? contribute away!