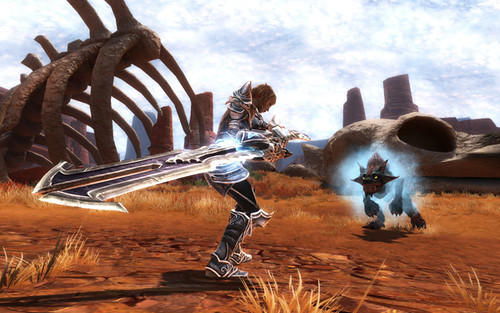 Just like any other RPG game, Kingdom of Amalur: Reckoning races provide players a chance to adjust their character before they can begin their adventure. Each race has specific attributes and perks so that you can choose a race that syncs with your game-style.

Kingdom of Amalur offers two Human Races, the Almain and the Varani, and two elven races, the Dokkalfar and the Ljosalfar, to choose from. Each Race has different Racial skills and Patrons to receive blessings. Following overview of each race can help you decide the race that will suit your play-style.

Three words define this race: Nobility, Honor and Bravery. In the battlefield, they are well trained warriors who abhor Chaos, imposing structure and ritual with every art of battle they are trained with.

Some of these brave warriors have moved to Faelands seeking freedom from the binding ties of politics and religion, hoping to make their own destiny away from their twisted homeland politics.

History
During the age of Middle Kingdoms, humans inhabited and socialized throughout eastern Alfaria. The locals however couldn’t carry the peace as gnolls had also build an establishment in the same patch. The gnolls under the strong leadership of Cynoc started to mesmerize the local humans who lacked a true leadership.

After years of struggle and a tyrannized period, humans did get a strong leadership in the form of a man named Balforth. He not only fortified the settlements against the merciless gnolls but also took the fight to them, eliminating their leader Cynoc.

After the independence, Balforth took over the Kingdom and was known as King Almere. The long struggle against the atrocity and injustice rendered people with great courage, bravery and strength. In the honor of the great King Almere, the locals adopted the name “Almain” to continue a proud heritage of their own.

Patron Gods
These are the pious entities who will reward you with the blessing. These blessings can be useful and will stick with you throughout the game. Almains can get blessings from the following Patrons:

Specialty
They are noble but that doesn’t mean that they will go easy in battlefield. The human race is well suited for those who like to express their rage through brawling. You will get the free skill points in Blacksmitihing that can be used to repair the equipment using Repair kits.

They are Charismatic, Intelligent and Seductive. Apart from their alluring presence, they have mastered the art of magic and manipulation. They can enforce things with their magical skills and their sharp mind makes the prey helpless. They fight along with their cousins Ljosalfar against the massive armies of Fae.

History
After the chaos of Deep Gloam was averted, they came out of the underground taverns and headed south in search of more temperate lands. They found an ideal homeland to live in and named it as Eldirth. The Erathis there knew the art of Magic so the newly settled dwarves learnt the magic from them.

They enjoyed peace and prosperity (known as Alfaria) until humans (The Dureks) flooded the territory with blood of the Ljosalfar. Although the dwarves managed to take the fight back to the barabrians but the justicars insisted that the Dokkalfar should end this war.

Though the Dokkalfar loved the light elves (Ljosalfar), they realized that their philosophical differences were too pronounced to continue living side by side. The Dokkalfar knew they must leave Glen Suthain behind and seek their own destiny.

Patrons
They can get blessings from the following Gods:

Specialty
The dark elves are the ultimate manipulators, controlling the actions of others from the shadows. You can use them to pic-pocket the NPCs when you begin and collect some valuable items. You should be careful though as if you get caught, you will loose all the stolen items.

Go to next page for the remaining two races.

If you don’t like Almain or Dokkalfar, you can choose to become Varani or Ljoslafar.

Unlike Almains, Varanis are usually merchants, mercenaries or even pirates. They inhabit the coastal areas around the sea which also suits their life style. While lacking political motivation for involvement in the war against the Tuatha, many Varani have found employment in the mortal armies as mercenaries.

The battle-hardened fierceness of the Varani has given them a well-earned reputation as a valuable ally in the seemingly hopeless battle.

Patrons
Varanis can earn blessing from the following Patron Gods:

Specialty
Those who like to be merchants and want quick money should choose this class. The abilities like Detect Hidden and Lockpicking will help your cause. Dispelling can be fruitful in looting the warded chests.

They Regal, Steadfast and don’t settle for a compromise. The proud and insular people who strive to preserve the nature by resisting any change. The courageous elves are renowned for their skill in battle, relying on their preternatural speed and grace to vanquish their enemies.The light dwarves stand along with their cousins Dokkalfar to fight against the chaos in Faelands.

History
After the Deep Gloam receded, they emerged from their hide outs and established a new homeland in the north (they called it Eldrith) with their cousins.

They enjoyed a long duration of peace and prosperity with humans and shared some cultural values. They wanted to keep their homeland so they used the magic skills to keep the region ice capped. To their eyes, their home embodied perfect order: a beacon of truth in a world ravaged by deception

When the Dureks (human barbarians) attacked, Ljosalfar had to suffer great losses. The elves fought back and after the revenge was taken and Dureks were pinned down, the Justicars (light dwarves) wanted to end the war which was against the will of dark elves (Dokkalfar).

This philosophical difference created a gap between the two elven races and they realized that both the factions should live a part to keep the familial bond. Both the groups however were rejoined to fight together when the Faelands went into chaos and disruption.

Patrons
They can seek blessings from the following Patron Gods:

Try to save the progress first before you try to steal anything from these chests so if things go wrong, you can reload instead of loosing all the stuff on being caught.

So which race character you would be starting the game with ?