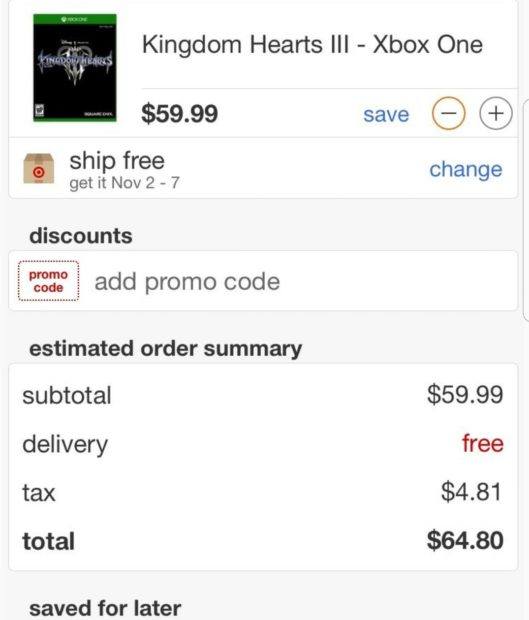 According to online retailer Target, as noted by Resetera user ‘javiergame4’, Kingdom Hearts 3 release date is November. As you can see in the screenshot below, if you pre-order the game and go to the check out the site reveals that the game will be delivered between November 2 and 7.

However, take this as a grain of salt since Square Enix is yet to announce the release date. However, it will be interesting if the game launches in November this year.

In related news, Square Enix has revealed that Sephiroth might not return to Kingdom Hearts 3. According to game director Tetsuya Nomura, the development team thinks that Sephiroth has appeared enough times in the series that featuring him now will feel redundant.

Furthermore, Square Enix has also noted that the game could come to Nintendo Switch too. According to Tetsuya Nomura, KH3 on Nintendo Switch is a possibility but, not a priority for the development team as they are currently focusing on Xbox One and PS4 versions of the game.

Kingdom Hearts 3 is an upcoming action RPG in development at Square Enix for PlayStation 4 and Xbox One.