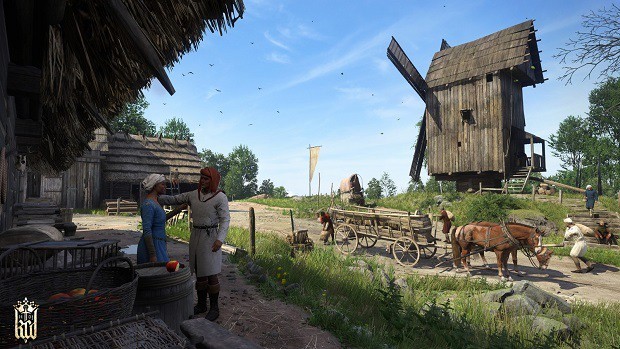 Kingdom Come: Deliverance Side Activities are smaller versions of Side Quests and they can be found scattered around the world of the game. Just like Side Quests, you can take any approach while trying to complete an Activity. It all comes down to your skills and choices.

Each region will offer you plenty of Activities that you can take part in. Keep in mind that these Activities play a part in affecting the world as well. Choices you make during these Activities will have an effect on the outside world so be careful before taking any rash decisions.

This Kingdom Come: Deliverance Side Activities Guide details all Activities that you can complete. We have added their locations, regions, and what you need to do in order to complete them. We have listed them according to their region.

Don’t forget to check out our Side Quests Walkthrough Guide that details all the Optional Quests in the game.

The Activities may not be active all the time. If you are unable to find an NPC at a specific time, come back at a later time to find them. We have completed the quests based on our own choices but you can choose your own choices to alter them to your liking.

These NPCs are roaming around the areas. Simply find them, interact with them, and they will tell you what they want you to do. They provide an excellent way to level up your Skills and explore the world at the same time. Let us start with the walkthroughs of different Activities found in the world of Kingdom Come: Deliverance.

Delicacies
Location: Neuhof Region
This is a small activity and requires you to do some hunting. Speak with Andrew, the Innkeeper in the Glade. He will want you to go out and bring him some meet. If you head to the North East, you can find some deer. Hunt them and bring the meet to Andrew

A Woman Scorned
Location: Neuhof Region
Talk with the woman near the entrance of the Inn in the Glade. She will assign you with yet another recovery task. An old man has used her services but now refuses to pay her back. You need to go to him and steal his money and return to the woman.

This mission is very hard to complete during the daytime. It is best that you wait until night falls and the old man goes inside the forest. Use stealth and keep in mind that he has different item sin his pocket. Use caution while pickpocketing his purse.

Return to the woman with the coin for your next task. She will ask you to steal a shawl from a woman. Head to the woman’s house at night. It is very easy to find since it will be marked on your map. Use stealth and break in the house. Pickpocket the woman to steal the shawl. There is also a chest nearby with some herbs and grasses in it.

Return with the shawl for your next task. Now she wants you to steal an ornamental dagger. Again, head to the location marked at night. You will see that there is a dog outside the place. Disturb it and a woman will walk out.

Knock her out and sneak inside her house. Find the sleeping villager and pickpocket him to steal the dagger. If you want, there is chest nearby with a 1K amulet in it as well. Return the dagger to the woman and she will get you your final task.

The last task is to steal a key from the same farmer’s wife. To avoid any bugging, do not steal the key when you go for the dagger. It might bug the game. Steal it when you are assigned the task later. Return to the woman after 24 hours for your reward. Speak with the Innkeeper Andrew and he will reveal her whereabouts to you.

Thick as Thieves
Location: Ledetchko Region
Complete the side quest The Good Thief and then find Miller Woyzeck in Kohelnitz. You can actually take three activities from him after completing each. All his activities require you to steal some items for him.

The first task is to steal five Waffenrocks from Talmberg Armory. You can find the key to the Armory on a Guard in Talmberg. Knock him out, get the key and use it to access the Armory. Make sure no one sees you. Return the items to Miller to complete this task.

Speak with him again for the next task. This time you need to steal a horse. Head to the Merhojed Stables, steal the white hosre and return it to Miller. For the last task, you need to steal a pendant from Lady Stephanie. The chest has a rating of very hard so you will need to be good at lockpicking skill to complete this task.

To learn more about Lockpicking, you can check out our Detailed Lockpicking Guide by heading over to the page.

Chumps on the River

Location: Ledetchko Region
Head to the islands between north and south part of Ledetchko and find the archer practicing here near his target. Speak with him and the activity will begin. This is an archery based challenge and will require relatively high level of archery.

As the activity begins, follow the two archers running towards the river until you see some logs floating in the river. Your goal is to hit these logs. The person with the most hits at the end will win at the end of the activity. You can repeat this activity, as many times as you want so it does not matter if you do not win at first.

Pickpocketing
Location: Rattay Region
Complete the Side Quest ‘The Good Thief’ and then talk with Peshek and the mil just outside Rattay to learn how to Pickpocket. You can check out our Detailed Pickpocketing Guide to learn more about it!

Do me a Favor – Punch Me
Location: Rattay Region
This is a Combat Activity. Head to the Rattay Lower Gate to start this Activity. You need to challenge Milan but before fighting him, you must prove your worth by defeating two more people. Defeat Ringlet and Stephen and you can finally take on Milan.

Ruin
Location: Rattay Region
Speak with Captain Bernard and he will ask you to clear a camp of bandits. Story Progression up to the mission “Pray’ is required. Do not attempt this mission early on the game. This activity is difficult so wait until you have good skills and gear.

Before heading to the camp, make sure that you have Stealth Kill perk active. It will allow you to kill silently. Head to the camp at night. It will be easier to find because of the light coming from the campfire.

When you reach at the camp, the bandits will be sleeping. Kill them all silently and loot the leader. Return to Captain Bernard with the loot and tell him that you have wiped the camp clean. He will assign you a similar task but with a different camp.

Head north of Rattay to find the camp. Kill al bandits silently and collect the loot from the leader of the camp. Return to Captain Bernard when done.

Beggars Feast
Location: Rattay Region
Complete the main story mission ‘Prey’ and talk with the Beggar in Rattay. He will task you with collecting 90 Hare meat. You can find Hares easily in the same area where the mission Prey took place. Return to him with 90 Hare meat and he will assign you another task.

For this task, you will be required to collect Boar and Mushrooms. To find them you can head to the forest located east of Sasau. Once you have all the items, return to the Beggar to complete the activity.

Rob the Rich, Give to the Poor
Location: Rattay Region
Once you have learned to read and completed the main quest ‘The Good Thief’, you will get another pickpocketing activity. Find the vagabond in the Rattay region and he will task you with stealing some coin from a guard. Steal the coin from him anyway you like and then return to the vagabond. He will assign you a second task of stealing 50 Groschen from a woman. Complete this task anyway you like and then he will give you another task.

The next task is to obtain a memento from a man’s house. You can sneak in his house at night and steal the memento from there. Return with the item to complete the activity and get your next task. The vagabond will then ask you to steal a Guild Seal in Ledetchko. Steal the Guild Seal and return to the vagabond. We have not yet played further than this point as of now. We will update it once we are past this point.

Thick as Thieves: Peshek
Location: Rattay Region
This is again a side activity related to theft. You will have to steal three items for Miller Peshek in Rattay. The first item is a ring located in a bath house. It is located nearby your location. Once you reach the bath house, head upstairs and find the chest near the Baths. It is an easy chest so you will have no problem picking it.

Return the ring to Peshek for the next task. Your next task is to steal asome items from Baliff who also lives in Rattay. Head to his office, break inside and find the parchment on one of the tables. Return it to Peshek to complete this task and start the next one.

Your last task is steal a book from Sir Hanush. We have not yet completed this task. We will update it as soon as we are done with it because it is a difficult task.

This guide is a work in progress. We will continue to add more Side Activities to it as we find out more. Keep checking back!

This concludes our Kingdom Come: Deliverance Activities Guide. If you want to add anything to this guide, feel free to use the comments section below!