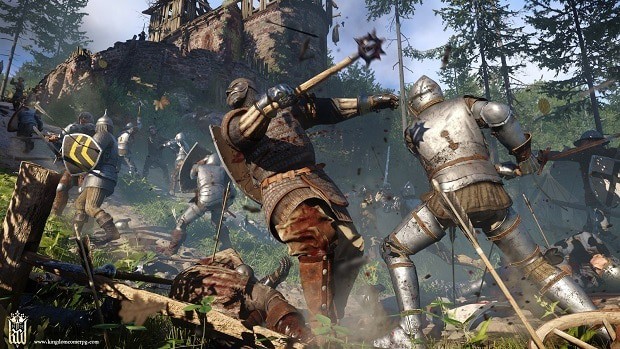 Blocking is a key part in overcoming the prowess of the combatants and mastering it is as essential as it is time-consuming. But bear with us, because our Kingdom Come: Deliverance Defense Guide will help you polish up on your blocking and defensive techniques.

Combat is as challenging as it is realistic in Kingdom Come: Deliverance. Fights break out between soldiers, drunkards, and even with the common folk. In such situations, unlike other games that favor playing offensively to get the upper hand on your opponent, Kingdom Come: Deliverance encourages strong defensive tactics in addition to the offense.

Be sure to check out our No-Kills Walkthrough Tips that will help you complete KCD without spilling any blood and earn a rare Achievement/Trophy.

Side note, timing and patience are quite important to this whole lesson of parrying and defending against attacks so make sure you’re not in a rush to deal with combat situations. Therefore, get comfortable but not lazy mind you, you have to be at your most responsive and attentive.

First things first, holding down the left bumper for consoles and ‘Q’ key for PC will cause the character to raise his hands for blocking the incoming attack but this isn’t all as the mechanics of the game are quite strategic.

Speaking of Weapons, be sure to check out our Weapons Locations Guide that will help you find some of the best weapons in the game.

While raising hands, the player has to choose one of the five locations that appear on the body of the enemy and has to match the precise point where the attack is coming from. Yes, sounds more complicated than it actually is. Additionally, the trajectory/direction of the attack isn’t hinted on early so the player has to guess or be super quick to respond and block in the same direction.

This involves good observation skills on the player’s part to interpret movement patterns of the enemy and block accordingly. For example, if an enemy strikes his weapon diagonally, the player can make a safe bet that the next move will be an upward slash of the sword so the player can block and point in the same direction.

If this wasn’t hard enough, let’s get to the other category of blocking which is the art of mastering ‘Perfect Blocking’. This technique will not only allow the player to avoid taking hits from the opponent but will also temporarily let the players to knock the combatants blade away from them for an instant and return that with a counter attack dealing huge amounts of damage.

Also, check our Skills Guide to learn more about some of the must-have Skills in KCD.

This technique, however, is unlocked after the player finishes the combat training session in the main storyline. Unlike the standard blocking mechanic, this one shows a little green shield icon just before the enemy is read to land his blow. Hitting LB in the same direction as this attack will stagger the opponent and give the player a temporary upper hand in the situation.

Moreover, this mechanic doesn’t even cost any stamina so you can continue to deliver heavy blows to the enemy without worrying about running out of that stamina bar. This is one of the many mechanics which add layers of challenge and realism to the combat system of the game and has players investing countless hours mastering it.

This is pretty much we have in our Kingdom Come: Deliverance Defense Guide. If there is anything else that you would like to add, let us know in the comments section below!