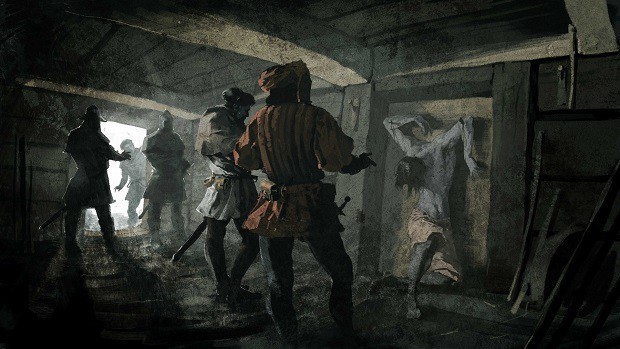 We will tell you how does the Crafting System work and also mention some important Tips and Tricks which can allow you to manipulate the system.

Do note that our Kingdom Come: Deliverance Crafting Guide is still work-in-progress. When the time comes, we will update this guide and keep it fresh to account for all of the new additions.

For example, you will have seen that you need to make an antidote in your first quest. There are certain materials there that you need to find for each craft. You can find these items when you are traversing Bohemia and then come back to the crafting place where you can craft the items.

Once you get to the place where you can craft something, you can select the items from your inventory and then you can place them on the shelf that is right beside the crafting pot.

After this, you can go to the Recipe Book that you have and then select the recipe that you need right now. The recipe will have a comprehensive guide to what you need to do. If you follow the guide, then you will be able to craft what you need.

In the quest, for example, you first drop in the right amount of Thistle and then you boil it by pressing Q. You can see how many turns it has been by moving the hourglass and resetting the time.

Each time the hourglass pours down, 1 turn has passed. Follow the instructions to the letter and you will have managed to brew your very first antidote. Do not be alarmed if you are unable to do it right the first time, as practice will make it perfect!

For other recipes, follow the same method that you did in the quest. As you move on in the game, you will soon unlock new recipes which will allow you to craft items that are more complicated. Then you will keep on preparing Potions, Antidotes, and Poisons when you need them.

As new information is released, we will continue to update this guide and will also mention how the Hunting System works in the game. Keep an eye out to find out how the intricacies that embody the Crafting System behave and how can you make the most out of it.

Before you are getting into any battle or fight you may ant to resharpen your weapon and repair them if they are not alright. For that, get to the grindstone minigame which will make you sit on a bench and sharpen and repair your weapon.

Just be cautious to not overdo this repairing or you might break your weapon.

Here are some of the important recipes which you can craft.

Artemesia Potion
This potion can be crafted using Spirits, two handfuls of Wormwood and some Sage. Drop the Sage prior to boiling for one turn and then grind the Wormwood. After that, drop in the Wormwood and then cook for two turns before distilling.

Antidote
As mentioned before; you need Water, Thistle, Nettle, and Charcoal. Drop the Thistle in and boil for two turns before adding the Nettle and boiling for one turn. Leave the mixture to cool before adding Charcoal. Make sure you do not boil after you add the Charcoal.

Lullaby Potion
This potion can be prepared using Oil, some Poppy, one Thistle, and one Herb Paris. Drop the Poppy and boil for one turn. Now add Thistle and boil for another turn. Now, leave the mixture to cool and then add the Herb Paris to finish brewing,

Saviour Schnapps
For this, you need Wine, 2 Belladona, and 1 Nettles. Prepare the Wine and then place the Nettle into the Wine. Boil for two turns and then grind two handfuls of Belladonna. Now place the Belladonna into the pot and boil for one turn to finish brewing. Lastly, collect the Schnapps using a Phial.

We have provided all available Alchemy Recipes in a separate guide at the new page.

Hunting
Hunting will give you useful material for crafting as well as meat. You will have hunter levels which will increase as you hunt more and more.

As you unlock more perk points you will be able to get more meat and materials from your hunting.