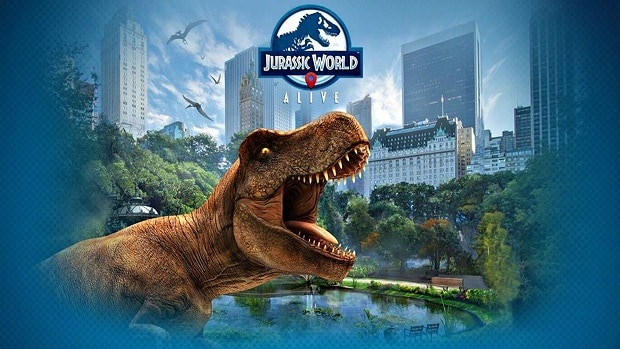 The popular Jurassic Park that we all love spending time with, be it films, reading material, or game is back with Jurassic World Alive on mobile devices.

Firstly, exploration and hunting for monsters work in the same way as Pokemon Go. In the augmented reality, you can roam the world around you to roam the world in the actual game.

Once you have come across a dino of your liking, use a dart to grab its DNA, the dinosaur will now be in your collection.

You can choose up to 8 dinosaurs at a given time. To maximize the DNA yield you could use the VIP that allows you access to a higher battery life.

Even though you will have to move and leave your comfort zone of the house for lootboxes, dinosaurs are a different story altogether. You can even get one if you are too lazy to move, however, that will take around half an hour.

Again, places, where more happens, are the places where rare dinosaurs rest. These can be anything from a well-known restaurant in a shopping place or even a gym.

Pay a visit to these places of interest now and then to catch some amazing dinosaurs.

When you collect dinosaur’s DNA by moving and finding them physically, or by opening lootboxes, you can use that DNA to evolve your dinosaurs to a higher level.

Additionally, you can also fuse certain breeds of dinosaurs together to form a rare and far superior one. This can then be evolved with the use of either of the DNA of the two original dinosaurs used in the fusion process.

These rare and special species of dinosaurs come with their own unique abilities and increased stats in health, durability and damage output.

This is the most fun part of the game where you take your team of 4 dinos to fight against another player’s team. You can choose your team by going to My Collection and swap out and in to get the dinosaurs you want.

Make sure you have variety in your team: one that has a high speed, one that boosts attack power, one that is durable in its armor and one in its health.

Once you are ready, you can tap the Battle icon that will pair you up with a player of similar ranking. The main battle is turn-based and will prompt you to first select a dinosaur for your first turn.

You will then be able to perform a dinosaur specific ability in the 15 seconds you get or utilize that turn to swap in a different dinosaur. How the actual combat works are this:

When you win a battle, you will receive incubators containing DNA, coins, and darts but this will take variable amounts of time to unlock.

At a given time, you can have no more than 4 incubators. If you are not looking for waiting any longer, spend cash to open these incubators immediately.

The following are some tips and tricks on catching dinosaurs and making the best at the game;

This is all we have in our Jurassic World Alive Guide. If there is anything else that you would like to add, let us know in the comments section below!