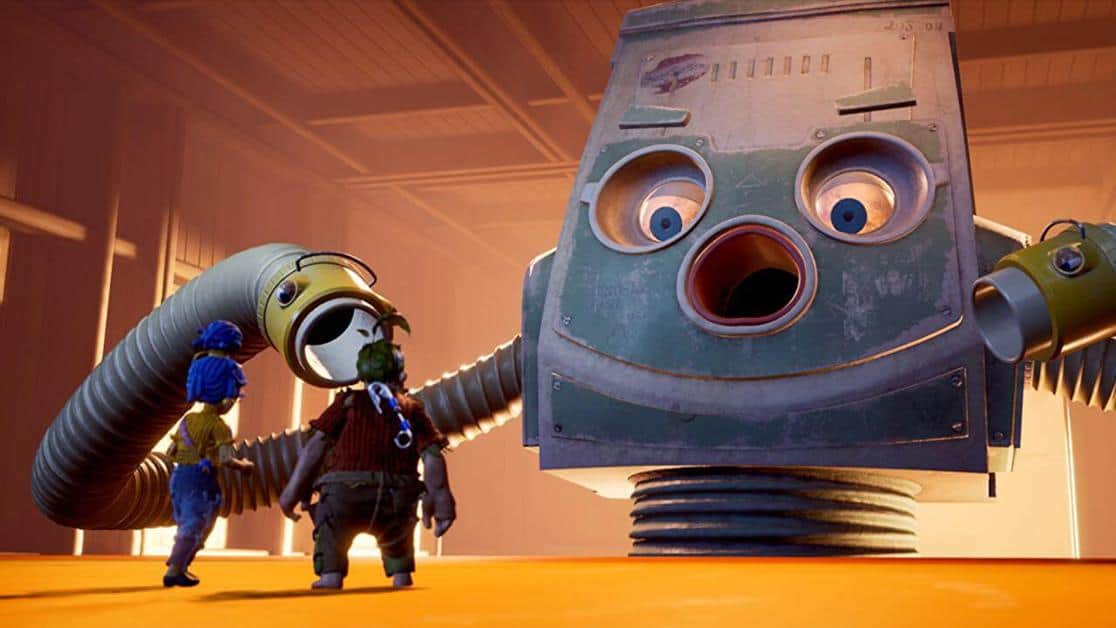 When you enter the arena where the Vacuum Boss fight will take place, he will start attacking you by throwing explosive mines at you. You will have to dodge them every time he scoops them towards one of you in order to avoid taking damage.

Keep dodging them until a platform lifts up from the ground. The platform will contain a vacuum hose that can be used to aim at Vacuum.

On the previous ground there will be another vacuum that can suck the explosives mines.

Once you deal Vacuum some damage, it will become angry and smash the fight arena. He will start shooting rings of air towards you.

Use your double jump to escape them. Once he cools down, he will start throwing mines again, so use the hose tactic again to damage him.

Eventually, the Vacuum boss will become angry again and deploy explosive thumbtacks all around the arena. These are wide strips, and they will detonate as they hit the ground.

Make sure you move away from a strip that is landing to escape the explosion. You and your partner will need to be vigilant during this stage to get to the next safe zones to avoid the explosions.

When the Thumb stack stage ends, Vacuum will once again start with the explosive mines, meaning you will have to use the double hose trick again. However, this time he will also launch giant lint balls all over the arena. Avoid these while using the hose.

Keep damaging the Vacuum boss using the hoses and escape the different waves of attacks as mentioned above until his health bar depletes completely and it falls to the floor.

When he is on the floor, you and your partner need to pick up the Vacuum boss’s hose arms and aim them at his eyes. Keep tapping Y to suck his eyes out and make it explode. This will be the end of the Vacuum boss fight.