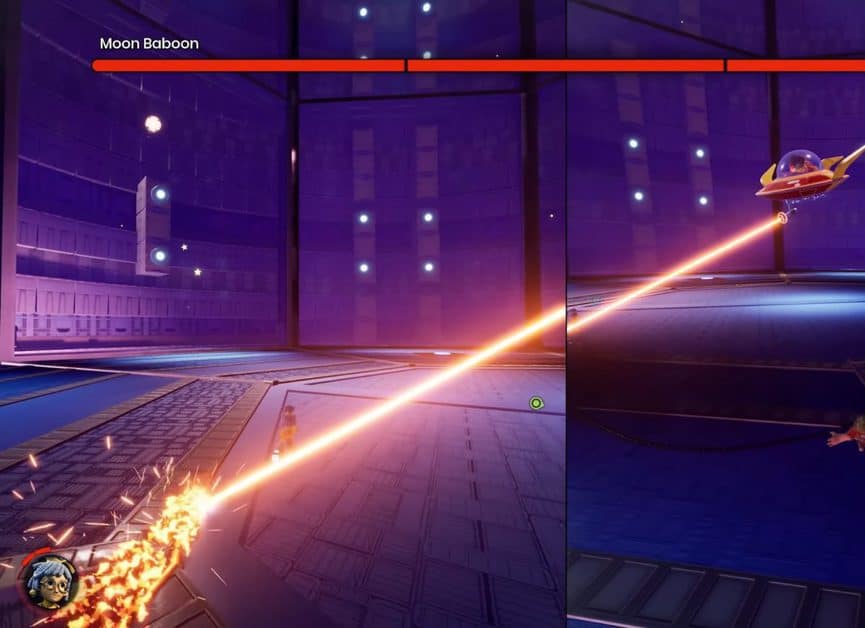 Making an appearance in the third chapter, Moon Baboon is surely one of the most challenging bosses of the game. In this guide, we have offered you an insight into his fighting style and some tips that you can follow to beat him.

The boss fight with Moon Baboon is prompted when Cody and May receive news of Rose’s wellbeing. You’ll be brought to a new room with a circular platform where you’ll encounter the boss under discussion.

The whole fight is divided into various phases. So, let’s go ahead and have a look at each of them one by one!

Phase # 1
As soon as the battle starts, Moon Baboon will fire his laser beam at May. Dodging it once won’t work since it’ll keep following May. So, have her run in a wide circle to avoid it.

While Moon Baboon is busy dealing with May, have Cody look for the lit-up circle with a red square border.

Once you find it, have Cody stand on it. As a result, a small container will spring up from beneath Cody.

Phase # 2
The second phase of the battle begins with a ring of lasers bursting from the ground and circulating throughout the platform. These laser beams are pretty easy to avoid as long as your timing is right.

While this ring is still at the back of Cody and May, Moon Baboon will shoot his own laser beam in Cody’s direction, just as he did with May in the first phase.

So, simply rinse and repeat, except that, this time around, May will be the one standing on the lit-up circle.

Once Moon Baboon’s laser beam strikes the risen-up container, he will be further damaged.

Phase # 3
This beginning of this phase will see Moon Baboon using his laser beam attack once again, only this time he will be shifting his focus back to May.

Have Cody find the lit-up circle and stand on it. When the container rises up, have May go behind it as it is a bit elevated this time.

As a result, the laser beam will strike the container, and Moon Baboon’s spaceship will crash. Rush to the crashed ship, have Cody get big and pick up the ship while May disables the laser beam of the ship.

Phase # 4
With only a fraction of his health remaining, Moon Baboon will again go up in the air, and this time, he will attack you small, explosive rockets.

Try to evade these rockets until they run out of gas. Once that happens, mount these rockets, and fly them right into Moon Baboon’s ship.

The ship will again come crashing down. Run over to the ship but this time, have Cody get smaller and head into the opened panel at the back of the ship.

Once inside the ship, Cody will be tasked with pressing the eject button. However, to reach that button, Cody will have to traverse across a maze consisting of electricity traps, turning platforms, crushing traps, and laser beams.

While Cody is busy fulfilling this task, Moon Baboon will – once again – get the ship airborne and attack May with the ship’s ground pound and lasers.

Here, you need to buy Cody some time to reach the destination, so bring your A-game and have May avoid all these ruthless attacks. Once Cody hits the eject button, Moon Baboon will be thrown out of the ship, and this boss fight will come to its end.