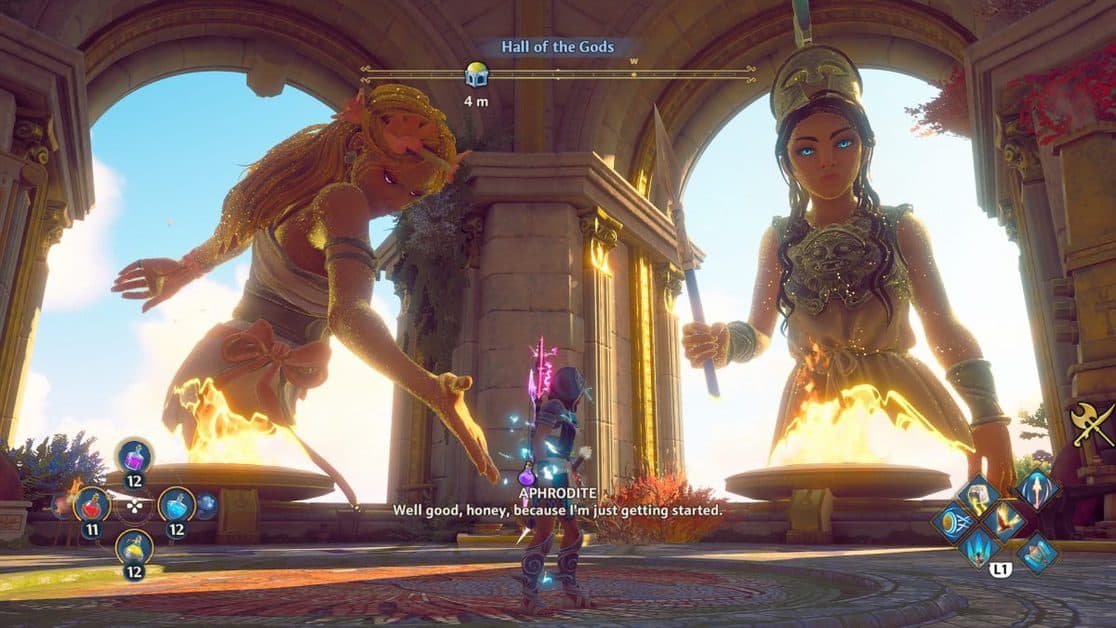 Athena’s Trial of Blessing is basically a part of the brand-new DLC “A New God” for Immortals Fenyx Rising.

Throughout the whole mission, you will need to solve puzzles in the form of cube sets. Each cube set consists of one small and one large cube.

So, what you will have to do is place a series of these cube sets on their designated pressure plates.

Don’t worry about carrying the larger cubes in these cube sets as they automatically get lifted through their smaller counterpart.

Below, we have pointed out the locations of each of these cube sets along with all the other relevant information. So, let’s begin!

There are a total of 5 sets of cubes that you’ll have to position on their assigned pressure plates.

Cube Set # 1
So, for the first cube set, proceed straight from the entrance of Athena’s Trial of Blessing. Hop over from the gap to the next platform and interact with the switch.

This will make the first set of cubes show up. Now, lift these cubes and place them on the pressure plates on the rightward platform.

Cube Set # 2
After taking care of the first cube set, proceed back north and glide through the gap to the elevated platform ahead.

Once there, interact with the switch in front to make the set of cubes appear.

Now, lift these cubes, make your way to the upper part of the platform through the ledges towards the right and drop the cubes on their designated pressure plates.

Cube Set # 3
From the place of the second cube set, proceed north and glide through the gap to land on the next platform.

Now, head west until you come across another switch. Interact with it to spawn a set of cubes in front.

Lift these cubes and ascend the elevated pillars in front to reach the upper part of the platform. Here, you’ll see a pillar moving up and down.

With the cubes lifted, get on this pillar. Once it reaches the top, hop on the room towards the left.

Next, carry these cubes to the rightward edge of the platform and place them on the pressure plates.

Cube Set # 4
Behind the pressure plates for the 3rd cube set, you’ll see another switch. Interact with it to spawn the 4th set of cubes.

Lift these cubes and head straight through, avoiding any lethal laser beam that comes in your way.

Soon, you’ll reach a pillar, moving up and down. Get on it, and it’ll take you to the uppermost part of the area.

Here, there will be a couple of pressure plates etched on the ground. Place the cubes on them to progress forward.

Having done that, glide to the next platform but before you land on it, pick up the treasure chest from the isolated room in its lower region.

This chest will grant you the Poseidon’s Trident Head.

Cube Set # 5
Once you’ve picked up the Treasure chest, head over to the platform and make your way towards the east.

You’ll come across another switch here. Interact with it to spawn the 5th set of cubes of this mission.

Lift these cubes and take them towards the north-eastern direction until you’ve come across a moving pillar. Make sure to steer clear of the red laser beams on your way.

Get on the moving with the lifted and let it carry you to the upper part of the platform.

Once there, place the cubes on their respective pressure plates.

After doing that, head straight inside the huge opened door ahead and halt inside the lighted up spot.

Once you do, a cutscene with Athena will be prompted, and the mission will come to its end.

You will be rewarded with Athena’s Agility!