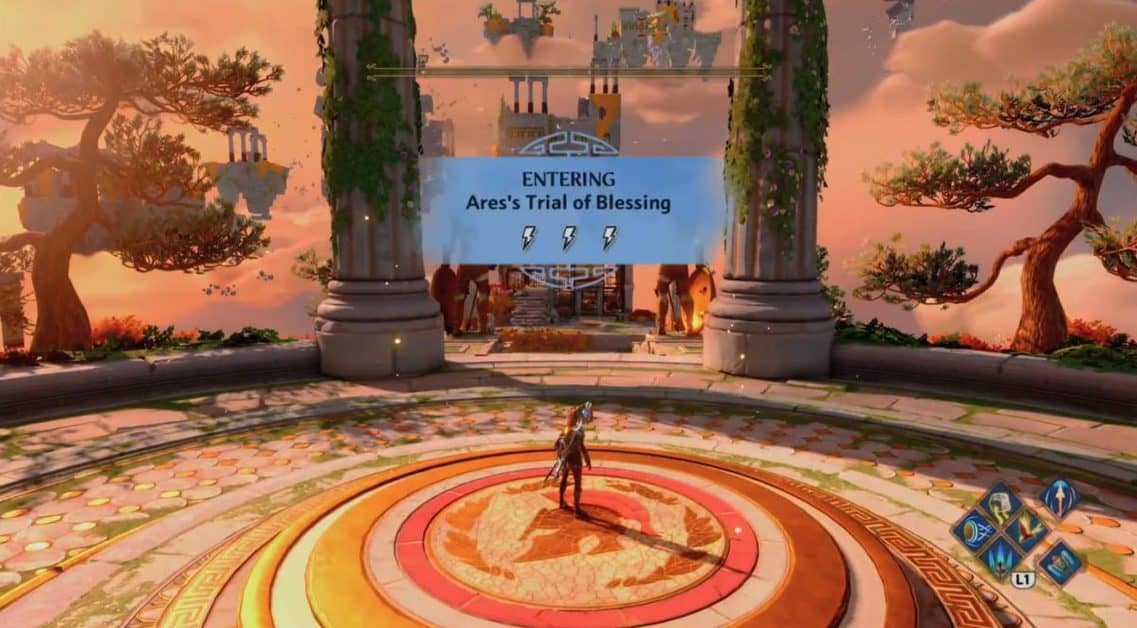 We will discuss the tips and tricks needed to complete Ares’s Trial of Blessing. Let’s get started:

After entering the Ares’s Trail of Blessing, go straight and jump across the gap and stand on the disc. Climb the stairs on the left and interact with the console.

Go down and stand on the disc again. The gate in front of you will open. Teleport to the other side of the gate. Then teleport back and climb on top of the floating block.

Teleport back inside and move the box using the spear attack. Then teleport back to the floating block. Jump on to the next platform and place the block on the platform with the anvil.

Go through the opened gate. Interact with the console to spawn a new floating block. Climb on top of the block and make a teleportation image of yourself.

Climb down and do the spear thing and teleport back on the block. Place the block on the platform again and go through the opened gate.

On the right, there is the spear power up the console again. Go there, and it will spawn a block inside. Set this as a point of teleportation.

Now run to the disc and open the gate ahead and then teleport back to make the block move using the spear power up.

When the block has floated outside, place it where needed and go through the opened gate.

Go outside and interact with the console. To spawn a floating block, Climb on it and float upwards to the platform at the height. When you are there pull the block up and place it next to the fan statue.

The block will take you to the next platform. Open the gate by placing the block on the trigger.

Now make the fan statue on your right the teleportation point and move ahead. Climb up the broken wall and there will be a hole in the floor.

Drop down on your right there will be a doorway. Use the wind to fly straight and then take a left.

When finally the block makes it to the area with the fan statue. Place it on the trigger marked with the anvil

Interact with the console outside and drag the spawned block to the perforated platform ahead.

Go down and start the airflow by powering up next to the fan statue. Drag the to the platform up there. Place the box on the anvil marked trigger.

Climb on to the other floating block and make it float. Teleport back on the block and place the block on the trigger.

Go through the opened door and climb up. Interact with the console and spawn a block. Make it move using the air from the fan.

Stand on the disc to open the gate and teleport to the open side. Now take the block outside and place it on the anvil trigger and float ahead.

Then alternate between bocks until you get to the roof and open the chest there.

Then climb down in the hall and walk into the glowing circle to get Ares’s Blessing.