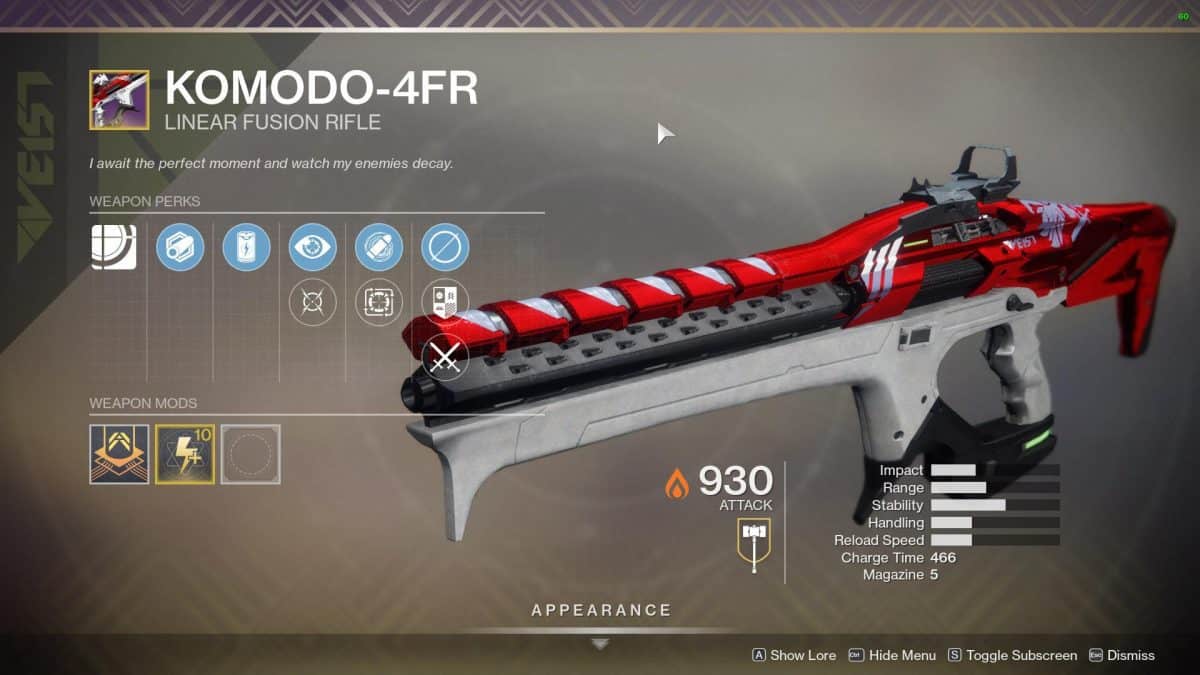 In the new season of Dawn of Destiny 2, we have some new weapons called Ritual Weapons that you can get from some NPCs after completing the specific tasks they give you. This guide focuses on one such weapon, that is acquired by doing Crucible related tasks. So read on for our guide on how to get the Crucible Komodo 4FR ritual weapon in Destiny 2.

These ritual weapons can be received from Lord Shaxx, The Drifter and Zavala, and for that, you will have to complete the quests they will assign you and you will get the ritual weapons.

To get this crucible ritual weapon you need to get to Lord Shaxx in the Tower. He will assign you the quest “Heart of Dragon” which will have some to-dos that you need to complete to successfully complete the quest plus all those things will be needed to be done while playing in the game’s Crucible matches.

Getting to the heroic rank will not be much difficult and will not take much long either for you to get to. So, basically it is the first step towards getting that rifle. It takes 1050 points in order to get the first heroic rank in Crucible.

The other two are about the linear fusion rifles, which is a very tricky weapon to play with while you are in player-vs-player mode. It is difficult to play with because the long time these rifles take to charge before they can fire.

Keep in mind that these linear fusion rifles, including the Komodo 4FR, are very good while fighting with an NPC because of the amount of damage they can deal in one shot.

These fusion rifles can give heavy damage while against other players, but the time management is quite tricky because of the time they take to charge before firing.

So, in order for this rifle to work you need to be able to anticipate your enemy’s moves during the match and watch out for them through minimap.

So if you keep an eye for the instructions above you will be able to land those 125 final blows and 15 precision final blows in the Crucible.

When you will get the Komodo-4FR, it will give you the following perks:

Where the aiming this weapon reduces flinch and catching moving targets will be quite easy. This weapon makes your aiming down the sight much more accurate and gives you more and more boost as your health goes down.

This is all you need to know about the new Destiny 2 Crucible Ritual Weapon, how to unlock it and what are the benefits.