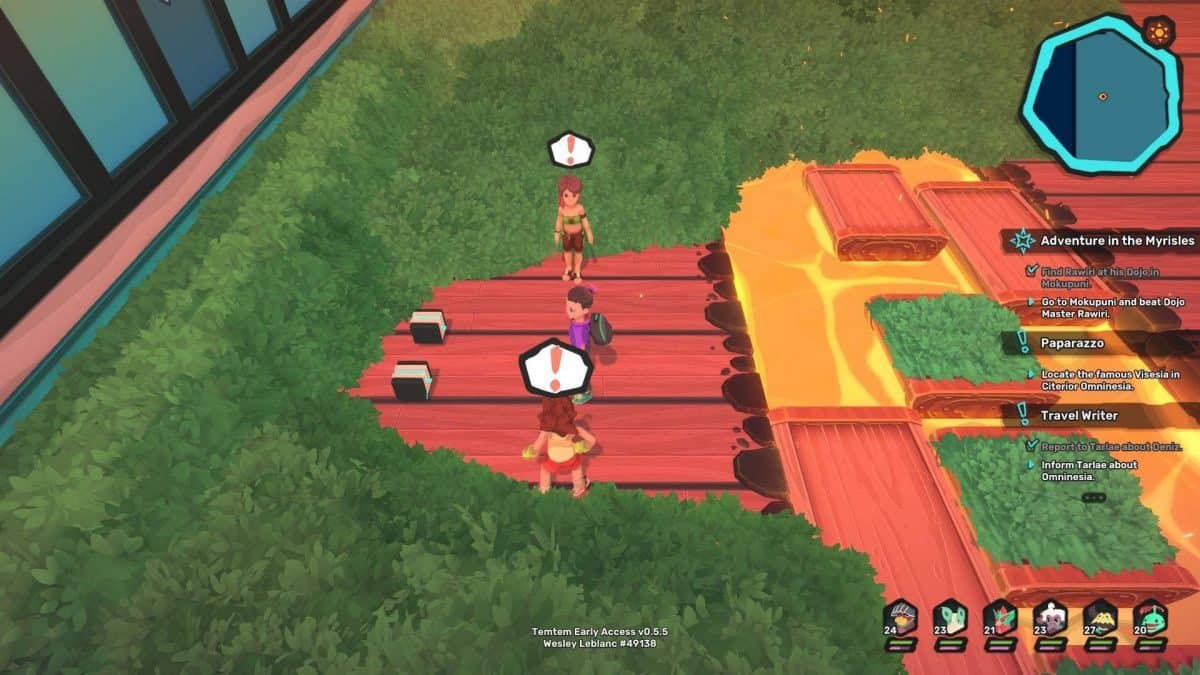 Proceeding through the regions in Temtems requires you to clear the Dojo of that region. In Omnineshia region of Temtem, you will have to win in Mokupuni Dojo to get the Elevator Key to proceed to the next region. The theme of the Dojo is Fire and Nature Temtem. In this guide, we will discuss all there is to know about Mokupuni Dojo and how to beat Rawiri in Temtem Mokupuni Dojo.

The path to Mokupuni’s Dojo is blocked off by a river of lava, and you need to solve a puzzle where you jump from raft to raft to get to the other side and face the Dojo master.

There are three rivers available. Keep in mind that you need to cross only the one in the center to get to the Dojo. The rivers on the right and left are optional, and you can cross them to face off against tamers. Along with an additional fight, you will also find a few items here that can be helpful in the upcoming fight.

When crossing the river, you need to make sure that you don’t hit the edges. Doing so will send you back to the shore and you’ll need to start all over again.

The puzzle is about timing, rather then an actual challenge. You need to keep on jumping rafts until you get to the other side and make your way to the Dojo.

When you get inside the Mokupuni Dojo in Temtem, you will notice that Tihani is the actual master of the Dojo but isn’t present which is why your fight will be with Rawiri. Let’s start with how you will go about the fight in the Dojo. After entering the Dojo you have to get to the platform on the right by jumping on the moving logs.

Now moving on to your fight with Rawiri. Rawiri’s squad has six Temtem that we will discuss in detail and how you can take them down in the Mokupuni Dojo.

Tateru – Level 24
This Temtem is weak to Mental and because Tateru is of neutral type which is why it lacks any resistance and its moves are Rage (melee), Heavy Blow (neutral), Nibble (neutral).

Deendre – Level 24
This Temtem is weak to Fire and Toxic while being resistant to Earth, Electric, Nature and Water. Its moves include Double Kick (neutral), Allergic Spread (nature), Sharp Leaf (nature).

Magmis – Level 22
Magmis is weak to Earth and Water and it is resistant to Crystal, Fire and Nature. Its moves are Fire Flame (fire), Jaw Strike (neutral), Rage (melee), Warm Cuddle (fire).

Banapi – Level 18
Banapi possesses weakness to Earth and Water but it is resistant to Crystal, Fire and Nature. Its moves include Embers (fire), Head Ram (neutral) and Sand Splatter (earth).

Raize – Level 28
This Temtem is weak to Earth and Water but it is resistant to Crystal, Fire and Nature. Its moves are Fire Tornado (fire), Embers (fire), Fierce Claw (neutral) and Roar (neutral).

Taifu – Level 29
Taifu is weak to Fire and Toxic and it possesses resistance to Earth, Electric, Nature and Water. Its moves include Bark Shield (earth), Gaia (nature), Allergic Spread (nature) and Cheer Up (neutral).

Lastly, we have the remain three Temtems of Rawiri, Magmis, Banapi and Raize. All three of these are Fire Temtems and the best counter to these three is any Water Temtem, or an Earth Temtem.

How to defeat Rawiri in Temtem Mokupuni Dojo

Your best choice for Temtem for the fight against Rawiri is Kalabyss. For this, you need to catch Kalazu and then evolve them into Kalabyss. Kalabyss is a Water and Toxic type Temtem and will grant you a huge advantage over the opponent Temtems.

Taifu will be your first major issue, as the Allergic Spread move will damage both of your Temtems. Taifu is also at a high level and has high HP and defense, so you need to focus fire on Taifu to make sure he is out of the fight as early as possible.

Next, after you are done with Taifu, your next biggest issue will be the move Ember. The move is used by Banapi and Raize in the fight, and this move will cause the attacked Temtem to burn for the next move as well.

This, along with depleting your Temtem’s HP, will also reduce the attack of the affected Temtem significantly. Along with Taifu, these two Temtems, Banapi and Raize are high-priority targets to be taken out quickly.

Other than this, the rest of the fight will be quite uneventful, and the remaining three of Rawiri’s Temtems are easy to defeat in the fight. Defeating Rawiri gets you 720 Pansuns as a reward, as well as the Elevator key that you can use to proceed to the next region in the game