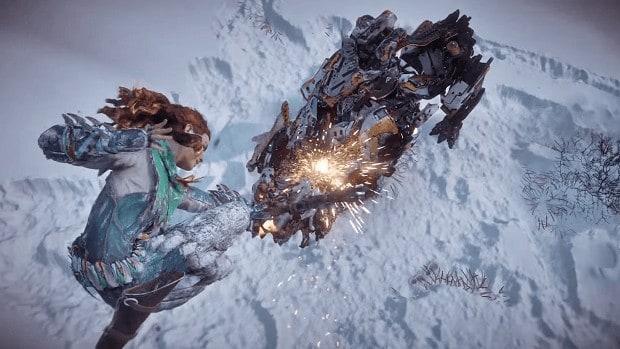 She has already shown up in Monster Hunter: World event The Frozen Wilds. After all, Aloy does have excellent tracking, survival and sharpshooting skills so it will be natural, finding her back in Capcom’s monster hunting game. And given that Aloy is already dressed for the weather, icy plains are her natural habitat.

But there is a catch. Aloy will only be appearing in the PS4 edition of Iceborne like she did with the previous game. Xbox One and PC players, you will only be able to play as Aloy if you mod her into a game. Tough luck. A trailer featuring this upcoming collaboration was originally uploaded by Capcom to YouTube, but has since been removed.

The trailer provides a glimpse at the storyline that’s coming with the expansion, set in the frosty region of the Hoarfrost Reach. According to the trailer, you’ll be on the hunt for something called the “old Everwyrm,” a creature with the power to destroy entire ecosystems.

It’s not clear what the Everwyrm is, but it probably is something even bigger and badder than Velkhana, the icy elder dragon that has graced a lot of the promotional material for Iceborne. The new trailer provides an eyeful of Velkhana, including some direct combat—she has some nasty looking attacks that include an ice wall and a vicious tail stab move that I can see coming together into tricky combos.

The trailer also includes some combat footage of Brachydios, a brute wyvern that’s been featured in previous Monster Hunter titles. There’s also shots of the razor-tusked Barioth and the Glavenus, which as a knife for a tail.

Monster Hunter World: Iceborne launches September 10 for consoles, and as before, we’ll have to wait a while before the PC version shows up—it’s planned for January 2020.

Monster Hunter World: Iceborne launches on PS4 and Xbox One September 6, with the PC release to follow in 2020.