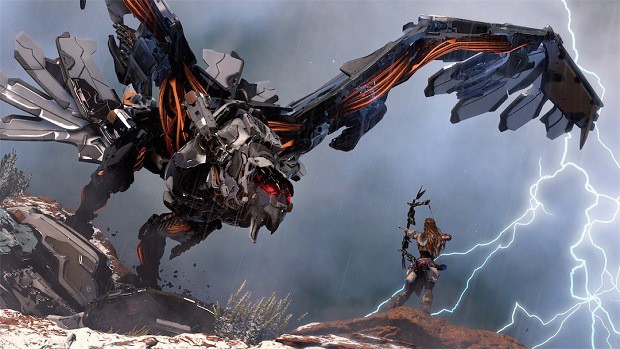 Players will be facing a Behemoth in the Terror of the Sun quest in Horizon Zero Dawn. In some ways, the Behemoth is a lot like a Trampler but is bigger and much more dangerous, making the fight an even bigger challenge.

This Horizon Zero Dawn Behemoth guide will highlight the best tactics to use when going up against the Behemoth during the story mission.

The start of this fight is very scary as you’ll be standing in the battlefield with the Behemoth and you won’t even have any weapons on you. You’ll have to wait a bit before your weapons are returned to you.

When the fight starts, make a run for the pillars and hide yourself behind it. Carefully listen for the Behemoth’s charge-up sound, which means it’s about to ram into someone. Right as you hear the sound, run towards another pillar and repeat this process until you get your weapons back.

The fight with Behemoth can last quite a while, no matter how good the players are since the robot is pretty powerful as well. Not only can it charge the players like the Trampler but also throw giant boulders at them.

The best way to survive in this fight is to constantly stay on the move to avoid each and every attack from the enemy because one or two direct hits will be enough to kill the player.

Similarly, players should always keep an eye out of telltale signs of the Behemoth’s attacks and get ready to avoid them when it prepares itself for those attacks. It is also a good idea to stay at a safe distance and not try to fight it in close quarters.

Tear and Shock weapons can be useful against the Behemoth, although it is resistant to shock attacks. Players can make use of their sling, tripwires and any other shock related tools to wear down the Behemoth and then use Tear arrows to chip away at its armor and damage the yellow canisters on the side of its head.

A shock arrow can also be used to deal massive damage to the power cell behind the robot’s head while Freeze arrows are useful against the weak spots on the Behemoth’s hips.

To make sure that the Behemoth doesn’t charge towards the players, Ropecaster is extremely useful as a couple of shots will tie down the robot and it will be unable to move.

Once the enemy is tied in one place, players can perform ranged attacks on it from a distance and safety, making sure never to get too close and get hit by its melee attacks. Concentration skill can be helpful here in order to land precise shots to weak spots.

Since it is a pretty long fight, players will have health and ammo issues, thankfully the arena is filled with dead robots that can be salvaged for parts.