Hole.io Guide – Getting Bigger, How To Rank Up, Tips And Strategies 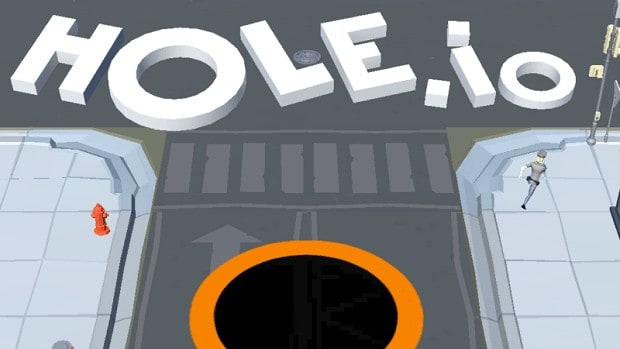 We keep getting a game in the .io series and this time around, it is Hole.io, a mobile game where you play as a Black Hole whose goal is to suck up everything in its path. Yes, a black hole right in the middle of a city. Check out our Hole.io Guide for some very useful tips and tricks that would ensure you are well fed at all times.

Fight off other black holes as you race to the end to determine who has grown the biggest. The goal, right from the start, should be to start strong. Afterward, you are only going to get stronger and bigger and so victory will ensue. Since you start off quite small in size, eat only what you can fit. These include people, cones, fire hydrants but NOT lampposts.

The best places to head to would be the parks that have ample of resources both for feeding and for increasing the time duration of the session. Some of the big parks can be found in the top-left of the map, while the center will also have some decent sized parks. These have people, trees, fences, benches and so many other items to be fed on.

Your next destination should be construction sites since these have many cones you can feed on. Sidewalks also have many small items clustered together for successive consumption. Whatever happens, never stop moving and keep the feeding game on.

As you eat your way through the city, you will eventually grow in size until you can even devour buildings for 4 points. This is where the real deal comes in, the bigger you get, the more your chances of engulfing the other black holes or players.

Moving to the middle of the map, you will be able to eat up vehicles that award you 3 points. The intersection between the streets is a particularly good spawn point for the vehicles. Therefore, you could just remain stationary and the vehicles would literally fall on you.

If you are feeling confident enough, go for the real deal: the players. The points you get depend on the size of the player’s black hole but you would still want to take the risk because consuming a player puts them out of the match until they respawn 5 seconds later. Moreover, if you feed the players in quick successions, you get a multiplier on your score so you are awarded many points.

This is risky, though, because once you chase a black hole, it will have cleared up things in its path so by the time you reach it; it is highly likely that the black hole becomes even bigger than yours. Therefore, the whole situation is reversed and you will need to run away. This an interesting cat-and-mouse game with both the cat and mouse switching roles frequently.

As the time runs out, the player with the most points wins. Each victory will net you 20 points with second place being awarded 10 points, third place 5 while the 4th and 5th places getting 2 points each. The 6th and the last place receive 1 point for their effort.

Once you reach 50 points, you unlock a star for your black hole. A total of 3 bronze stars are required for them to convert to a single silver star. Similarly, 3 silver stars will be required to form a single golden one and so on. Thus, you can apply different cosmetic appearance via the different color and number of stars that are unlocked through the points you earn.

Do note that the official game is only on the Apple store for iPhone and iPad currently. The Android versions are fan made and do not fully reflect the quality of the game.

This is all we have in our Hole.io Guide. If there is anything else that you would like to add, let us know in the comments section below!