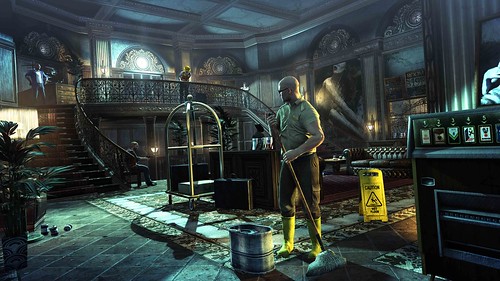 No game would ever be truly complete without at least some Easter Eggs and references, and Hitman: Absolution is no exception. To find all these Hitman Absolution Easter Eggs, read this guide.

During his mission, 47 will run across several characters from previous Io Interactive games as well as coming across assassins from a different franchise. Here are the ones we have found so far:

Playstation 3 Trophies
It just so happens that the Playstation version of the game has exactly 47 trophies that you can unlock, coincidence? I think not. 360 owners will be heartbroken to find they can only attain 46 achievements.

Mini-Ninjas
In the orphanage, look around in the side rooms of the first floor for a desk with a lit green lamp on it. Next to the lamp, you will find a Mini-Ninja figurine. This is a reference to Io’s Mini Ninjas Game.

Chipmunk Suit
In the ‘King of Chinatown’ mission, you’ll find a man waiting inside a dirty dead-end alley. Knock him out and put him in the dumpster to find the Chipmunk suit on the ground. Wear it to look cute while you rain death on your foes.

A Dance With The Devil
Relating to Hitman: Blood Money’s Mission “ A Dance with the Devil”, you will find two easter eggs in Absolution. First off all you should head to the place where the king takes his lunch in “The King Of Chinatown” where on the wall behind his table you will find 5 masks.

Other two easter eggs can be found in “One of a Kind”. For this you have to head to the basement of Timothy the Tailor Shop to locate a calendar representing Eve on the back wall of the basement and a mask worn by Anthony Martinez on the second shelf’s Central rack, near the desk.

Various Encounters with Kane and Lynch
Agent 47 runs across both Kane and Lynch from the series by the same name a number of times throughout his missions. You find Kane standing next to the jukebox in a bar in the ‘Welcome to Hope’ mission, shooting him will cause him to whip out a submachine gun.

In the ‘Birdie’s Gift’ mission you find Lynch in the shooting range of a gun store firing at some garden gnomes. Much later in the game, when you visit the courthouse you will see Kane writing a letter to his daughter in a cell. You can peek on him through a vent.

Lynch makes his second appearance in “Dexter Industries” within the easter egg. After you have triggered the Nuke Easter Egg you will find Lynch sitting in a dessert listening to music while two women are sunbathing nearby.

Assassinating an Assassin
In the Sniper challenge mode, you use a sniper rifle to kill off a target and all his bodyguards from a nearby roof. Well look at the really tall green skyscraper behind the target building. Near the top, there is a very familiar ledge on which you can see a crouched man looking out over the city.

Getting a Stripper To Dance For You!
My favorite Easter Egg so far, and probably the only reason you’re even reading this article, this will show you how to make a stripper appear in the window next to the large banner that says ‘Stallion’ and ‘2012’ hanging from the rooftop in the Sniper Challenge. There are three items that you need to shoot.

First, look at the benches near the helipad. There should be a small white item on one of them. I don’t know what it is, but you need to shoot it. Next look on the other side of the roof to find a white shoe right next to the Jacuzzi/tub. Shoot that too.

The third is a bit harder, look through the windows above the dance floor, and you will find a large stuffed bear among the bookshelves. There is something sitting on top of the bear’s head (though I can’t really make out what it is), and you need to shoot it. Once all that is done set your sights on the window next to the banner for your reward.

Three Rubber Duckies
There are three yellow rubber ducks in the Sniper Challenge. No don’t ask me why they’re there, because I don’t want to know. Here’s where they are so you can look at them and be baffled as well.

The first ducky is on the lower level, move your sights down until you find the balcony with the trees on it. Zoom in and search for a pedestal that looks like a water fountain. The duck is sitting on it, so shoot it for fun.

The second duck is near the white boot from the stripper Easter egg, right next to the Jacuzzi on the right side of the roof. The third is a bit difficult to find. Look at the doorway underneath the ‘Stallion’ banner that’s hanging from the rooftop. Next search around the base of the tree that is directly opposite to the doorway for the last ducky.

Ice Cream Truck Road Rage
In the mission “ End of the road” there are a total of five vulture which when spooked by you by running close to them make them fly away! Once they are airborne, aim at them and shoot them down.

Old Fashioned Film
Yet again in the “End Of Road” there are a total of three Dog’s Bone. One in the grave Lenny Dexter digs, one near a dead dog in the middle of the area and the last one in the northeast of the car on top of makeshift grave out in distance.

To trigger the easter egg just throw the bones that are already not in the graves.

Dexter’s Nuke
While playing “Dexter Industries” you can trigger another easter egg. Once you reach the factory compound head to the main lobby where you will find a nuke suspended above the reception desk.

To trigger this easter egg you have to find a ping and shoot him in the mission “Death Facrory”. Go to the land mind testing zone and follow the wall left against the fake houses and then take the door leading behind the props. Now take a left where you will find the pig standing in a crate

The Act of Blood Money
While you are playing “ One of a Kind” you will have to find some newspapers clipped to the wall. As soon as you enter the basement you will find these newspapers clipped on the right wall having various articles relating to Vinnie Sinistra, Mohammad Bin Faisal Al-Khalifa and Joseph Clarance.

Double Rainbow
While playing “ Absolution” when you reach the crematorium and fight all the Praetorians you will find Numerous angel statues scattered all over the place! In order to trigger the second rainbow hence the easter eggs, shoot the angels statues.

You will find names of 47’s previous targets like Diana and Travis. Further more you will find targets from Hitman Blood Money and the four generals which were the targets in Hitman 2.

Loch Ness Monster
In “The Personal Contract” you will find two shell statues, one next to a piano and the other one on the second floor balcony to the right after heading upstairs.

In order to trigger the easter egg you have to stand next to the piano after opening the blind with the console  and then shoot the two shells. Turn around and glance back the window.

Lara Croft Reference
You can hear the song that the guard tried to play and get the Tomb Raider vibe in “The Personal Contract”. Another reference is found in “Birdie’s Gift” where in the shooting contest agent 47 stands on the floor mat on which Croft is written.

When you are in the duck hunt range you will come across a travelling bag on which you will yet again find the word Croft.

The Three Electricians
While you are playing Terminus and are in Terminus Hotel you will find three variation of Electrician Disguise!One with a hardhat on, one with the baseball hat and the last one with no hat at all.

The name badges on these disguises read Faraday, Franklin and Walesa respectively.

More Details Allan
This easter egg is a continuation of a blooper in “Blood Money” which occurs playing “The Dance with the Devil”. In the kitchen by the hell party you will find a lobster in a kitchen crate with a description “Allan Please Add Details”which you obviously had forgotten in Blood Money.