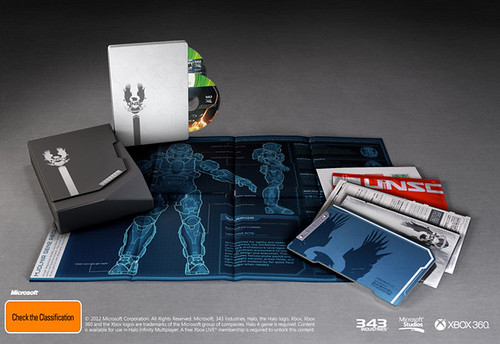 Excited about the Halo 4’s release this year are you? Well, if you are willing to shell out $100, you can get yourself the limited edition which packs far more content.

The limited edition first surfaced back in May but Microsoft has just announced its details now.

Keep in mind that these bonuses come on top of the previously announced exclusives such as the War Games Map Pass giving you access to the three future multiplayer DLC packs; six specializations that will be unavailable when Halo 4 launches on November 6.

If these feature were not enough the limited edition also comes out with a UNSC Infinity Briefing Packet, which will show armor customization schematics, a blueprint for the Infinity ship, and insight into the Spartan training program.

So start saving up people cause this is one limited edition you do not want to miss out on.

Halo 4 hits the shelves on November 6 exclusively for Xbox 360.