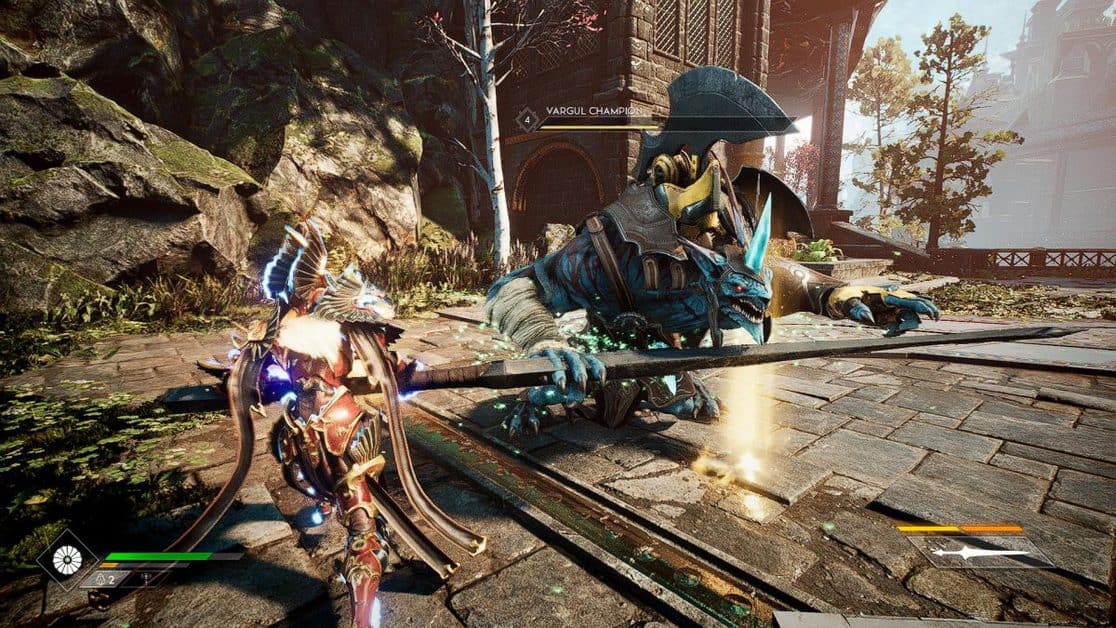 Godfall mainly works on one-on-one combat style therefore having the complete knowledge of the weapons your character can wield is a must. In this Godfall Best Weapons guide, we’ll go over all the weapon types and techniques, how to upgrade weapons and the rarity system.

There are five weapon classes/types in Godfall. They are each unique in their wielding style, specialty and stats.

These weapon types are

Weapon stats aren’t set in stone, you can also upgrade them! You need to go to the Forge that is located at the side of the main hall.

By using resources like Electrum, Sunsteel, Incarnate Essence and DragonSteel, you can upgrade your certain weapons and increase their damage.

The rarity system in Godfall defines the type of effect weapons will have.

The effects are random and so are their values, which depend upon the type and the class of the weapon.

Below is a description of each weapon class, all the weapons you can find in that class, as well as associated weapon techniques:

These weapons are quite balanced and have short cooldowns.

Longwords also have a 4 light attack combo and one heavy attack finisher. Spectral Furry and Spiral Technique are the signature moves in this class.

Spectral furry results in repeated sword attacks that make your sword cut through your enemy’s guts and the Spiral technique allows you to slide forward and damage every enemy in your way.

This class focuses on speed; hence your mobility will be the most when you use these weapons. This class is, therefore, best against unarmoured targets in close range. You can perform a 4 light attack hit with this and also a heavy attack Blade Cyclone.

The special techniques that you can perform with these weapons are Inner Focus and Mortal Coil.

Inner focus grants you more damages for a short time and Mortal Coils pulls the enemy towards you with the exception of bosses.

Polearms
The Polearm category includes the weapons that you can throw at your enemies. They have a longer range but comparatively less damage.

The techniques that you can pull off using Pole arms weapons are Polearm Slam and Javelin Throw.

Polearm Slam allows you to jump in the air and bring a strong slam down to your target and the nearby enemies. In Javelin throw, your throw your weapon and blind a single target.

These weapons deal the most damage among the rest of the classes but at the cost of lower speeds.

Warhammers, when thrown around in a circle, are capable of dealing AoE damage.

Concussive Smash and Unstoppable Force are the two techniques in this class.

The first one damages and stuns the nearby enemies as you slam your hammer on the ground and the second deals damages using the same technique but in a straight line in front of you.

This class lets you wield two swords so that you can deal explosive damage to your enemies. Your speed is a bit compromised here though.

Two impressive special techniques that you can pull off using these weapons are Whirlwind and Great Throw.

In Whirlwind, your character spins around and damages nearby enemies and in Great Throw will deal damage to the enemies in its path when it is thrown!

All of the above-mentioned weapons in Godfall can be found after completing different quests, as rewards.