God of War The Sickness Walkthrough 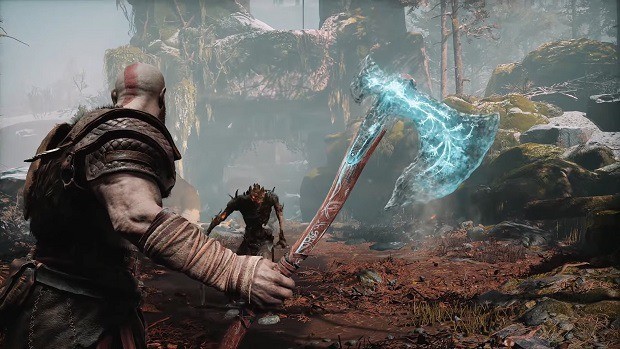 Our God of War The Sickness Walkthrough Guide will guide you through the entire 9th chapter of God of War 4 in a step-by-step manner so that you can easily complete all of the objectives and get through to the next chapter.

God of War The Sickness

Get Atreus to the boat and start rowing towards Freya’s Cave. Once you go between Thor’s feet and get to the entrance, debark, and head up the elevator. Get Atreus to Freya to find out that Atreus can be cured if Kratos is able to find the heart of the Helheim’s Bridge Keeper.

Since the Leviathan Axe will be useless in the frozen realm where Kratos is headed, he will need to head back to his home to retrieve something.

Use Freya’s boat to get to your home and defeat the different Hel-Reaver Lords that come your way. When Kratos does get inside the house, you will be able to notice that he retrieves the Blades of Chaos, the weapon that he used in the previous games, the same one that was forged by Ares.

The Journey to the Heart

Use your newly acquired blades to kill all of the enemies in the yard and then get to Helheim by using the Realm Travel. Cross the tree roots and get to Helheim.

Once you are there, you need to get to the Bridge Keeper by working yourself through the realm travel bridge.

Defeat all of the enemies in your way, including the Hel-Brood that can be defeated easily with your new Blades of Chaos. Just make sure you keep on falling back slowly so that you are not swarmed by the enemies.

Soon you will arrive at the gate that you cannot cross. Here, burn the brambles on the left using your blade and detour around the gate using the crevasse. Defeat the 2 Hel-Reaver Guards by breaking their shields and then defeat the lords before heading forward and continuing on your path.

Once you are on the ground, defeat the enemies once again and then head to the other side of the pillars in front of you by burning the brambles in your way.

The Sunken area comes next, and you need to defeat the Hel-Viken that comes up. Your blades deal much more damage than they did in the last encounter, but you do not have Atreus to help you.

Other Hel-Walkers will drop in during the fight and you need to clear them out first before you can focus on the Viken. You can climb out of the arena by burning the bramble bush which holds the pillar and then uses the platform.

The Bridge Keeper is a variant of a troll with the possession of a magical weapon. He can vanish and appear anywhere in the arena.

He will often charge his weapon to leave bombs which will damage you a lot should you not be quick enough to dodge them.

Often, he will use a ranged projectile that you will be able to parry, dodge it to be extra safe.

After defeating him, Brok will return and give you the power to control the winds of Hel. You will need to transfer the winds into the trap nearby to open the gate.

You will also be able to use the winds to cross the bridge. Target the trap and cross the bridge and then face the Ice Nightmares. They may be difficult to beat due to their extreme agility but a hit from your blades will take them down.

The upcoming bridge will have Hel-Reaver Lords and a Hel-Brood. Take them out (you should know how to easily defeat them by now) and then cross the bridge using the winds.

Next up, you have to open the outer gates of Helheim. You need to transfer the wind to the trap above the opening of the tunnel and then to the trap of the gate so that you can open the gate and enter.

Keep on moving the winds as you move ahead. Get the wind onto the chamber door towards the right of the gate and loot the coffin inside. Continue capturing and transferring the wind so that you can move forward until you come across the Hel-Traveler.

Defeat the Hel-Traveler by slowly chipping away at his armor and evading his attacks.

Once you defeat him, keep on moving forward and defeat the Hel-Reavers that you face. Once you have gone past them (and moved the winds along with you), you can trap the wind behind the statue on the right side.

Keep on moving ahead and clear out all enemies in your path. Go around the snow mounds and get the winds onto the bridge railing.

The path is quite a bit linear and you can keep on moving towards the end of the level. You will also come across a Legendary Chest that you can loot. Soon, you will be able to travel to the Midgard using the realm-travel option and deliver the heart to Freya.

Simply get to Freya’s door and it will trigger a scene. Remember to stay around after that to hear an interesting story told to Atreus by Freya. The chapter will end there.