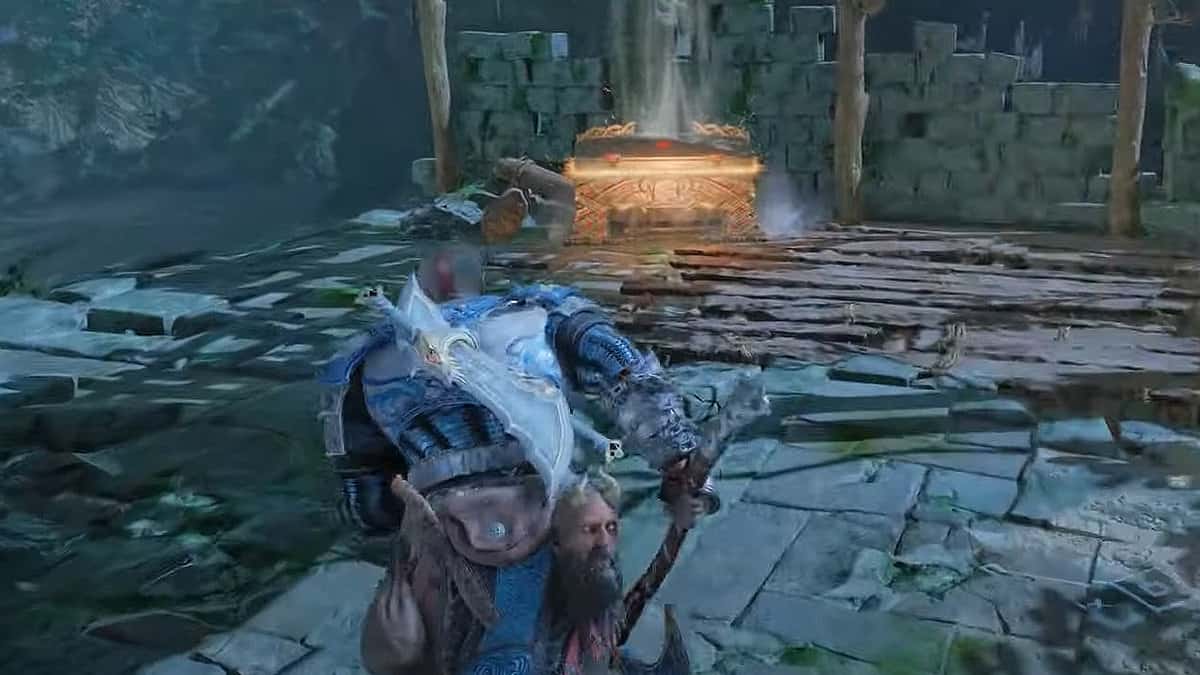 In God of War Ragnarok, you can find many collectibles including Legendary Chests that contain items such as Runic Attacks, Weapons, and Amulet Attachments.

Finding all of the Legendary Chests in every realm is needed if you are looking to do a 100-percent completion run. The following guide will ensure that you clean out the map in Vanaheim in the game.

Slip through the narrow path between the tree roots and head to the other side. You then need to travel North again and into the wooden archway.

There will be some poisonous plants blocking the way and you can clear them by throwing the axe at them. Soon after that, you need to fight enemies found in the ruins.

By going to the North of the Ruins, you will find a crack in the wall that you can crawl through into the cave. Turn right and the Legendary Chest will be on the right.

If you travel North and jump the ledge from the starting point of the Abandoned Village, you will end up in a hut. Take the left and take the Zipline to the north side.

At the end of the path, you will face the Hateful boss that you need to defeat. The cave also has the Draugr Hole that you can collect.

Head inside the small hole in the wall North of the cave. Climb ahead and take a right, the second Legendary Chest will be on your front.

Travel south from the path in the jungle until you will arrive in front of the stone wall close to the waterfall. Climb to the right of the waterfall and use the grappling point to jump to the other side of the cave

Navigate North from the Winding Forest path until you will arrive before the two huts that have a big gap in between.

Move the crane in the middle to use the hook as the Grappling Point. Grapple to the other hut and head North. You will then find a closed cave entrance on the right wall.  Open it using the chain and head east.

Use the hook in the middle to grapple and jump the gap in front. Head North and you will face Blue Scorn Plant that is Poisonous. Throw the axe on the right tree to clear the path.

Use the Gold Chain in front to climb upwards into the wooden ledge. The Legendary Chest will be below the ledge at the end of the pathway.

There will be Scrorn Plants releasing poisonous gas into the atmosphere close to the chest. Throw the axe to destroy the plant on the right side. You can then access the Legendary Chest by dropping down into the ground.

In the middle of the Abandoned Village, you will come across an optional Wooden Crane Puzzle. You need to move the crane in the middle so that you can jump across the other side.

After getting to the other side, you need to travel right and head to the Northeast side which is the same direction where you came from. But this place was only accessed by the grappling point of the crane.

On the other side of the gap, where you will find the Legendary Chest in front.

After collecting the Lore Marker located on the Northern edge of the River Delta, you will find a Drawbridge. The Legendary Chest will be on the other side of this Drawbridge which is blocked by the Red Fungi Bramble.

To drop the Drawbridge, you need to follow the following steps:

Travel ahead from the Drawbridge and you will find the Legendary Chest in front.

After collecting the Lore under the rainbow in the Noatun’s Garden, you will find a locked door on the left side. The door is locked due to the Counterweight that cannot be detached due to the Red Fungi Bramble.

You need to create two magic bubbles: one on top of the counterweight and one on the locked gate. Burn them up using the Blade of Chaos and Red Fungi Bramble will be destroyed.

Head towards the other side where there is a window on the side. Throw the axe by aiming underneath the counterweight. Doing so will unlock the castle gate.

As soon as you will enter, you will be attacked by two flying nightmares. Collect the Legendary Chest after killing the Nightmares.

In Cliffside Ruins, you will discover the new region called Goddess Falls when you are heading South on the River Delta. Once you have discovered this region, you can easily open its gate utilizing the Rune Slate.

Using the boat, you need to travel south at the edge of the Veiled Passage. Beach the boat and head west on foot. You then need to fight four enemies: three nightmares and a Reaver after climbing the wall close to the bridge.

After defeating all these enemies, travel North and get down using the Gold Chain. If you travel a little further, you will Legendary Chest below after the drop.

The path below is inaccessible and can only be cleared by blowing up the Red Pots and rocks using the Hex Bubbles. Throw the Sigil Arrow to light up the bubbles.

Doing so will clear the path below. You can then drop down below to access the Legendary Chest.

Legendary Chest #1 (Rampage of the Furies)

After collecting the Artifact Hylli Crest, head South towards the closed gate that needs to be opened. After opening the gate, look to your right after going inside.

There will be a small hole in the wall that is blocked by Hel’s Bramble. Use the Blade of Chaos to destroy it using the Blazing Surge. Once the hole in the wall is open, you will see a chain holding a target.

You will need to complete the main Forging Destiny quest to access the remaining collectibles. Since this is a main story quest we are talking about, there might be story spoilers ahead.

There are also other, certain favors and side quests that you will need to complete. If you are still completing the story, perhaps return after you have reached this point.

After collecting the two lore on the starting point of the Freyr’s Camp, you need to head west into the little dome inside the cave. Inside this dome, there will be a stone blocking the path.

The stone can only be destroyed with the help of the Wind Fissure that can be obtained by completing the Foraging Destiny main quest. Once you have the right equipment, you can easily destroy the stone to get through.

After getting into the new path, you will find the Legendary Chest in front.

As soon as you will get the Odin Raven in the Frey’s Camp, you need to head East into the forest. Use the grappling point in the middle of the gap to jump across and head forward.

Pass through the narrow passage surrounded by tree roots. You will then end up in front of the wooden structures that house the Legendary Chest.

Accessing the Legendary Chest is a rather tricky path. First, take a right and then climb the cement structure in front. Jump down and climb the brick wall Northwest.

At the top, there will be a wooden beam on the South side that you need to slip to the right side. You will then reach on top of the structure that has Legendary Chest on top.

Legendary Chest #1 (Honor of the Fallen)

In The Plains area, there is a secret path North of the region that has the Legendary Chest inside. You need to Travel Northwest until you will find two yellow rocks blocking the path.

You can easily clear the path by throwing the Draupnir Spear in each of the holes in the rocks. Head forward after the path is cleared and you will find the Favour Item ahead. The Legendary Chest can be found on the same path forward.

Legendary Chest #1 (Whisper of the World)

After completing the Return of the River Favor quest, you need to travel east until you find the Celestial Altar main door. You need to free the wheel that opens the water passage.

Head west and jump the gap using the Grappling Point. You then need to fight Dreiki after dropping down from the Golden Chain. Head back from where you came into the arena and head North in the lift.

Drop down and take the boat East to the other side. Climb up the wall on the East end and follow the narrow pathway. There will be an entrance outside with the drop.

You need to jump upwards by strategically grappling back and forth to the structure in front. On the left side, you will see the Legendary Chest surrounded by the Red Fungi Bramble.

You need to destroy it using the Hex bubble and lightning it up using the Blazing Surge. The Legendary Chest is now accessible and can be opened.

Legendary Chest #2 (Jewel of the Yggdrasil)

You can find the second Legendary Chest in the Southeastern part of the Jungle that can only be accessed if you have done two things.

The first thing is that you must have completed the Return of the River quest and changed the time to day from night in Celestial Altar.

You then need to take a boat to the Southeast part of the river and dock it at the end of the path. Travel West and slip through the gap in the rocks.

Travel ahead and jump the small path twice to find the small crack in the wall up front. Slip through the crack to the other side.

Get inside the cave ahead and look for a steel switch in the Northwest corner. Hit it with the axe to turn it that will open the cave door. Once inside, the Legendary Chest will be on the right.