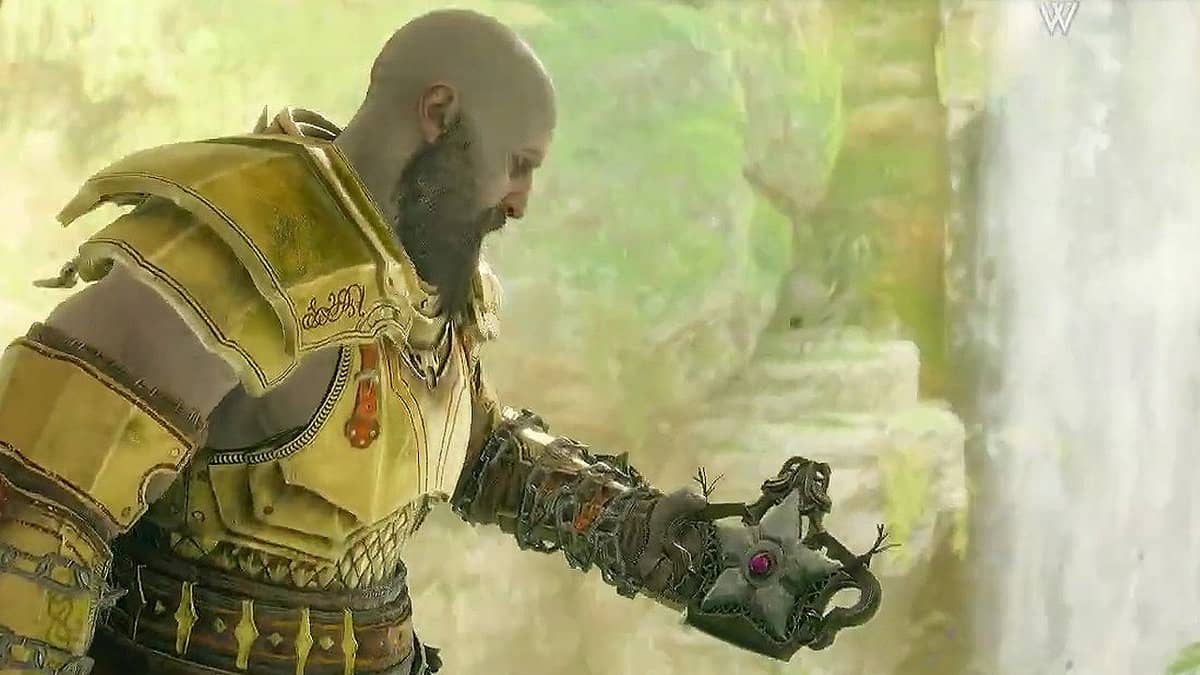 Vanaheim has more of Kvasir’s Poems for you to find in God of War: Ragnarok. This realm also has several Family Crests to find as Artifacts as well as Spirit Mementos that have been broken down into two halves.

Artifacts are identified as items with a unique purple glow. They are required for a 100-percent completion playthrough. However, do not be worried about finding all of them on your first run. There are no missable Artifacts in the game. You can find all of them after you beat the main story.

The following are the Artifact locations in Vanaheim in God of War: Ragnarok.

To find this Artifact, you need to head toward Vanaheim’s The Southern Wilds marketplace. Navigate to the end of this marketplace by traveling through the tiny streets.

At the end of the path, you need to climb to get onto the wooden pathway. There will then be a gap inside the path and you need to jump on the other side to the pillar. If you peek down this pillar, you will see a blue-colored stone platform on the ground.

At the edge of the ledge on the pillar, you will find a shield that needs to be kicked down. After doing that, you need to smash the ground by jumping down below. Upon landing, you will find yourself exactly in front of the Artifact.

To make this Artifact available, you need to first travel to the Abandoned Village to do the quest called The Reckoning. You then need to travel back to where you came from to the Freyr’s Camp.

To access the camp, there will be a boat at the end of the shore for you to take it. Once you are on the other side, the artifact will be right in front of you.

As most of this region can only be accessed by the rowing boat and you need to head close to the area called Noatun’s Garden Area. There will be an old tree located after the Pilgrim’s landing area.

When you are close to the tree, look for a beach on the right to park your boat. If you walk forward, you will end up near the base of the tree, and the Artifact will be in between the bushes.

You will be in a rowing boat when you start in the River Delta region. This Artifact is next to the Southern Mystic Gateway, the same place where there is Brok’s Workshop.

To get this Artifact, you need to travel to the Vanahein area in the Noatun’s Garden. You will end up in front of the building after collecting Lunda’s Broken Belt on the Southeast corner of the region.

There will be a tree on the left of this building that has a small water pond in front of it. You will find the artifact in front of this between the grasses.

Once you are done with Freya’s Missing Peace Favor in the Goodness Falls region, travel to the gate of the castle that will be in front of you. To open the door, you need to lower the drawbridge.

The function of the drawbridge on the entrance is to avoid spitting plants by giving a path over them. Travel ahead and exit the castle from the backside. After traveling a little, you will find this Artifact in the corner of a room.

To get this Artifact, you need to travel to the main tunnel in Veiled Passage. Before going further, you first need to destroy the bulb with any of your combo attacks. At the end of this tunnel, you will find a wooden wall with a spitting flower.

You need to complete the Return of the River favor and the Creatures of Prophecy main quest to get the remaining artifacts from here on. That means you may come across potential story spoilers ahead.

This is part of the Casualty of War: The Brooch favor. Make your way to the starting point of The Plains and face the frozen lightning bolt. Now, head northeast to find half of the Artifact behind a tree.

For the second half, head to the southeastern corner and climb the cliff above The Sinkholes. The other half of the Brooch will be on the ground next to a skeleton.

This next Artifact requires a bit of time and patience. Head to the northwestern corner of The Plains to spot fissured yellow rocks. Use your spear on them but do not detonate just yet. There is a third fissured rock on the back.

Head north over the fallen column and drop down. Swing across the gaps and go down the tunnel on the right to find the first half of the Artifact.

Return and climb the wall you found after exiting the cave. Then turn left to find the third fissured rock. Use your axe and detonate to open the path forward. Go straight through to reach the lake to find the other half.

Use the lift in The Jungle to make your way to the top of the dam. Spot the crack on the right side by using your spear and go through. Follow the path left and you will find the first half of the Artifact.

For the second half, change the time of day to night and head back to The Plains through the river. Then head west to reach the end of the river. Enter the arena where you defeat Drakki and enter the doorway to find the second half.

Kvasir’s Poem #1 (An Organization: In The Future)

You can only find this Artifact at nighttime. Change the time by finding a Celestial Altar and then reach the Mystic Gateway location marked on the map.

Head towards the frozen lightning bolt and climb the wall. Drop down, head left, and then drop below from the edge where there is a lit torch.

Stick to the left wall before jumping across to the next cliff with another lit torch. Turn around and swing yourself to the other side. Climb up the wall and turn left.

Keep going straight before turning left after crossing the crystals. Follow the path until you see some bones below. Drop down and follow the path into the tunnels.

Traverse forward by scaling the walls. You will find the Artifact on the other side.

This Artifact is split into two halves. You will find the first half in the western corner of the beach. For the second half, head north up the river and take a right. Keep going until you enter the area where you fight the two Ogres. Defeat them and take the Artifact right of the giant dragon ring.

Reach the Mystic Gateway at the river entrance of The Sinkholes. Then climb the nearby wall and make your way through the tunnels to reach the arena where you fight Crag Jaw.

Defeat him and go to the northwestern corner of the arena to destroy some red bramble with your Hex Bubbles. This will reveal a gap. Slip through that and take a left to go up the stairs. You will find the Artifact here beside a dead warrior.

Start by reaching the Mystic Gateway for The Sinkholes entrance. There is a tunnel above it. Head through there and take a right. Jump across the gap and take a right again. Use your axe to slip through the gap on the right and you will find the first half of the Artifact around the corner.

Now head to the beach northwest of the tunnel’s entrance and go through the gate. This is the same place where you fight a Draugr. The second half of the Artifact is at the end of the tunnel.