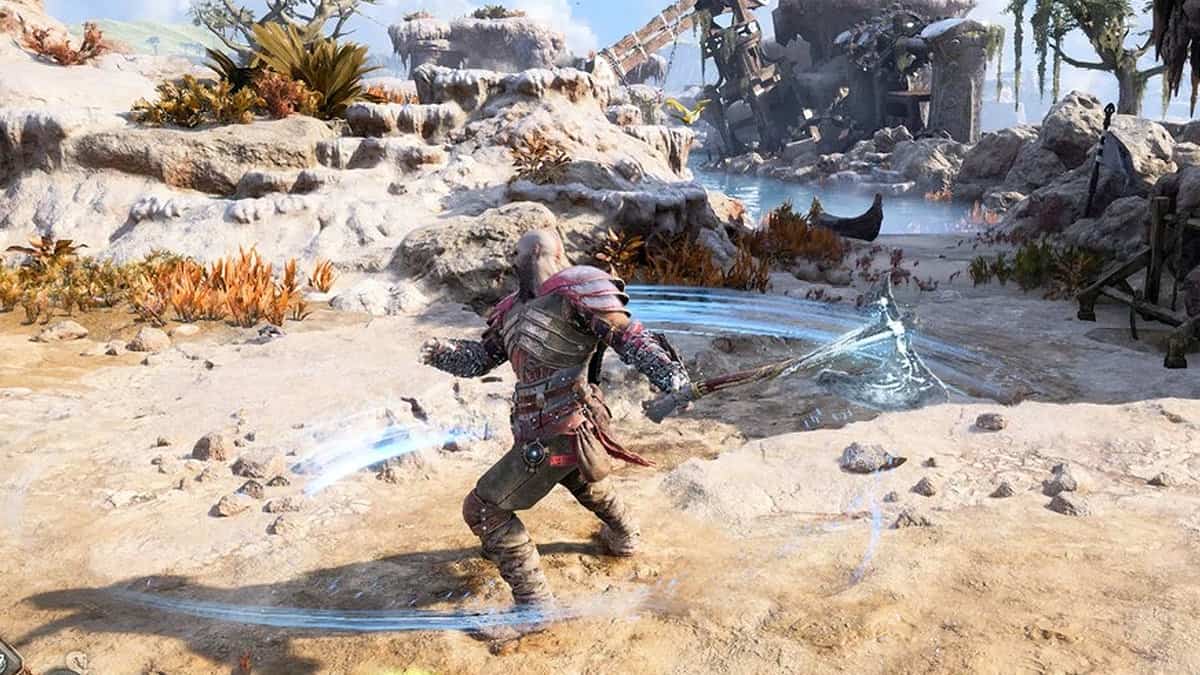 Heavy runic attacks are the most powerful abilities you can slot into your Leviathan Axe, Blades of Chaos, and Draupnir Spear in God of War: Ragnarok.

Similar to light runic attacks, they can be obtained from Legendary Chests that are scattered across all nine realms in the game.

You will also be able to unlock some of the heavy runic attacks through the mainline story quests. These are unmissable. However, if you forget to loot them, they will be automatically placed in the blue chest next to the Blacksmith for you to pick up.

Once you have killed 28 Odin’s Ravens, head to The Raven Tree using a Mystical Gateway. Head straight and you will find three Legendary Chests. One of them will give you the Breath of Thamur runic attack to make your Leviathan Axe stronger.

From the point where you start the train area, follow the wooden walkway until you see a fork. Take a left from here and go straight to find an opening in the ground to drop into.

Climb down the walls and go through the tunnel. Keep going straight until you reach a junction. Take a left from here and a left again until you reach some red vines. Destroy them to get to the Legendary Chest and you will have yourself the Fog of Fimbulwinter.

Head to The Derelict Outpost west of Tyr’s Temple in Midgard. Go through the ruins and you will come across a crane. Move the crane so that you can swing across to the other side. Scale your way up the cliff and you will find the Legendary Chest with the Ivaldi’s Anvil runic attack for your Leviathan Axe.

Reach the marked location on the map by going through the main entrance of Freyr’s Camp in Alfheim. Follow the path through the camp until you spot the large blue ring hanging from above.

Take the path to the right and then jump below onto your left. Head right and swing yourself across to the right again. You will come across a crawlspace. Go through and enter the building directly in front.

Jump across the ruins and drop below. Take a left and start climbing the ruins until you see a zipline. Turn left from that zipline and jump across to the wooden platform. Climb to your right and you will find the Legendary Chest containing the Leviathan’s Roar runic heavy attack.

Make your way through the Cliffside Ruins until you pass the hanging corpses and the poison totem to a large drawbridge. Look to the left of the drawbridge and you will see a Legendary Chest covered in yellow crystals. Use Sigil Bubbles to destroy the first set of yellow crystals and then attack the red pot next to the chest to remove the second set.

Where to find Blades of Chaos’ heavy runic attacks

Enter The Forge through the double doors marked on the map and then follow the path to the right until you pass under a bridge. Stick to the right once again and you will come around to a wooden wall. Climb up and freeze the water beneath the water wheel to call down the elevator to go one level above.

You will now see an iron gate in front of you with another water wheel to its left. Grapple the wall next to the water wheel to climb up and then make your way around the back to get the Legendary Chest.

This is both an easy and hard runic attack to obtain for your Blades of Chaos. Meteoric Slam is found in a Legendary Chest that lies in The Raven Tree. However, you can only open it after killing 38 Odin’s Ravens.

The Nemean Crush heavy attack can be looted from a Legendary Chest while completing the Song of the Sands favor in the Burrows.

Once you destroy Hafgufa’s bindings, a new path will become available nearby. Climb the wall and follow the pathway to a tunnel entrance where you can drop down from the edge.

Clear the room and open the Legendary Chest for the Nemean Crush runic attack.

You will find Tame the Beast during the Reunion quest in Helheim. After Garm fights off the monsters, head right and climb the wall using your spear. The Legendary Chest with Tame the Beast will be above.

Head to the Raider Hideout west of King’s Grave in Midgard and clear out all of the enemies. Then find the Legendary Chest in the right corner of the hideout. It will contain the Tartarus Rage heavy attack.

Artillery of the Ancients (Vanaheim)

You have to defeat Dreki, the crocodile boss, during the Creatures of Prophecy quest for the Artillery of the Ancients heavy runic attack.

Honor the Fallen (The Plains, Vanaheim)

Head right from the Mystic Gateway at the marked location and you will come across a blockade. Use your spear at the two glowing rocks but do not detonate your weapon just yet. There is a third weak spot behind the blockade that you need to use your spear on as well.

Head right and then drop below. Take a left and jump across the gap. Climb the wall and turn left. You will soon spot the third weak point. Use your spear and detonate it to destroy the blockade.

Now head right and drop below to go through the opening for the Legendary Chest.

The Finger of Ruin (The Raven Tree, Niflheim)

Head to The Raven Tree after killing all 48 Odin’s Ravens in God of War: Ragnarok. One of the three Legendary Chests here will give you the Finger of Ruin runic attack for your Draupnir Spear

You have to defeat the Flame Phantom boss during The Summoning quest to get the Vindsval’s Windstorm runic attack for your spear.