How To Defeat Gulltoppr And Heimdall In God Of War: Ragnarok 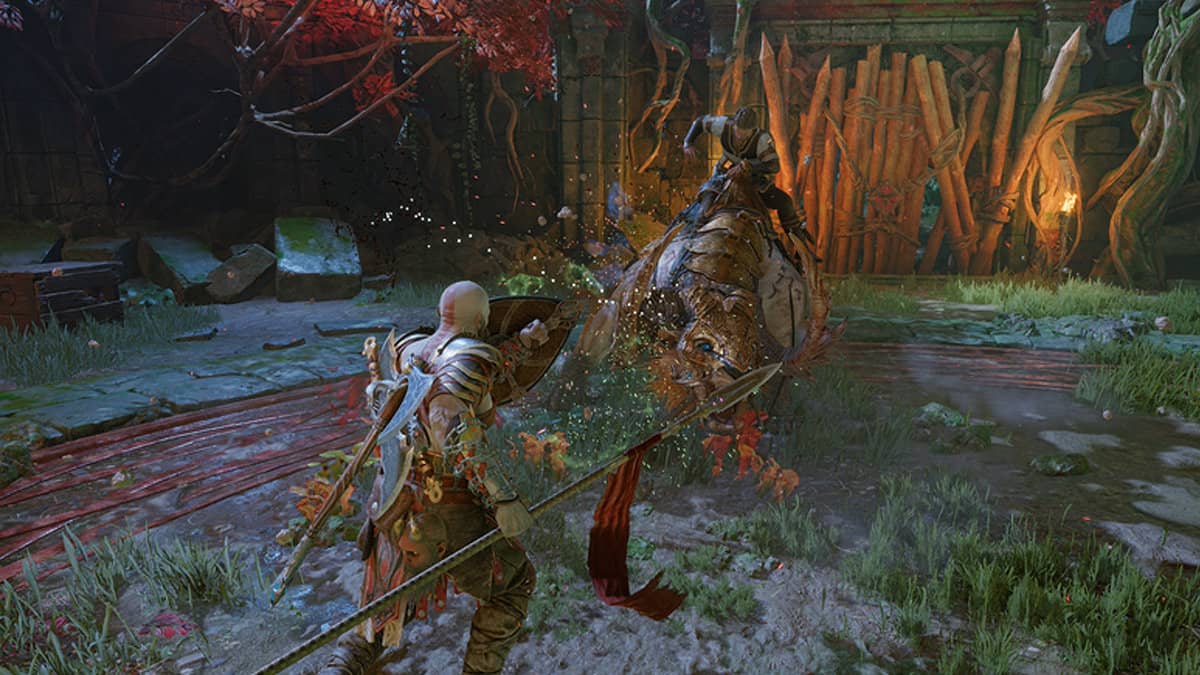 Among the significant bosses in God of War: Ragnarok, Heimdall is the one that rides a creature known as Gulltoppr. You will encounter Heimdall while going through the Creatures of Prophecy chapter, as the 13th chapter will have you face Heimdall alone as Freya will go somewhere else.

Once you have taken down Gulltoppr, you will have to fight Heimdall twice. Heimdall is one of the strongest characters in the game, and he’s also known as the god of foresight.

Knowing all about Heimdall is crucial to improve your chances of winning the combat.

This guide will explain the abilities and moves of Heimdall in both fighting phases and provides you with the tricks to ensure swift victory for you.

You will encounter Heimdall and Gulltoppr in the northern section of Vanaheim. This two-part boss fight takes place during the Creatures of Prophecy quest where you will be freeing Freyr.

To face Heimdall, you will first have to defeat Gulltoppr.

Rushing Attack: Gulltoppr will keep running toward your side and try to hit you with his head. The frequency of these attacks is high, but you can always see them coming as the creature runs toward you.

Just dodge away the attacks to get maximum protection.

Heimdall Bifrost Attacks: While you engage Gulltioppr, Heimdall will perform range Bifrost attacks on you in the shape of a single projectile. Get away from those.

Heimdall charges his hand before releasing the attack.

Dodge is the best option for protection.

Heavy Claw Swipe Attack: Gulltoppr will use his left paw to land attacks on Kratos, dealing damage and making him vulnerable to other attacks.

The attack is easy to recognize as a yellow circle appears before Gulltoppr rushes to make the attack.

You can block or dodge the attack.

Thrashing Headbutt Attack: Gulltoppr will move backward and unleash a series of headbutts toward you. These headbutts deal substantial damage and break your guard.

You could see the attack coming from how the creature lifted his front legs and moved backward.

The protection is to dodge the attacks.

Bifrost Explosion Attack: Gulltoppr releases a highly damaging dealing Bifrost shockwave towards your side. The ability comes into existence as Heimdall merges his Bifrost ability with the creature.

There will be a pause before Gulltoppr releases it, so it becomes easy to dodge.

The shockwave is unblockable, so get away from it to get protection.

The first and utmost thing to do before the start of the fight is to get frost on your Leviathan Axe. This will reduce the mobility of Gulltoppr, making it easy for you to land your attacks and move away from their attacks.

The thrashing ability makes the creature vulnerable. You can use your shield to stop him during his charge and land a combo of attacks to deal maximum damage. Additionally, use ranged attacks to deal damage when Gulltoppr is at a distance trying to get ready to charge against you.

Do not rush toward Gulltoppr, and let him come toward you. Use sideways dodges to make openings for the landing combo of melee attacks. Stay alert as the Bifrost attacks come from Heimdall, so keep your eyes on both enemies.

Sword Attack: Heimdall will charge at you with his sword to deal significant damage.

Before making the attack, Heimdall flips his sword, indicating that he will come for the melee sword attack.

The only way to protect yourself is to dodge the attack.

Bifrost Attack: Heimdall can make Bifrost attacks using a single purple projectile. Heimdall tosses the Bifrost towards you using his hands and deals good damage if you fail to protect yourself.

The purple glow in the hands of Heimdall indicates the incoming Bifrost attack.

Flash Sword Attack: You will notice Heimdall moving in a flash of seconds and using a large horn along with his sword to land a combo of melee attacks.

You will know this attack is coming when a yellow ring appears on Heimdall. Make sure to dodge the attack as soon as you see the yellow indicator.

Realm Shift Attack: Heimdall uses his abilities to slow down the time. He moves quickly towards you to land damage.

Heimdall creates a blue circle behind his back during the attack, making it easy for you to know about the incoming attack.

The best way to protect yourself is to move away from the place to avoid getting hit by Heimdall.

Before carrying out the attack, Heimdall will swing his sword in an arc and lift it to perform the Bifrost attack.

The best way of protection is dodging the attack.

Melee Charge Attack: Heimdall is much more robust in this phase, and he will leash himself toward you to land a high-damaging melee punch, knocking you down. Every melee attack from Heimdall will also put Bifrost on you, so be very careful.

Heimdall’s right arm will glow before he rushes towards you to land the blows.

You should dodge the attack as it is unblockable.

Melee Fist Slam Attack: Heimdall rushes toward your location to slam his first down on the ground. This will create an AOE shockwave that deals Bifrost damage to people within the radius.

Melee Punch Swipes Attack: Heimdall takes a leap toward you to land a barrage of quick punches.

You can see the attacks coming from the motion of Heimdall as he quickly leaps toward you.

The best protection is dodging the attacks.

Charged Bifrost Attack: Heimdall will do a high-damage Bifrost attack by slamming the ground if you are in his melee range. The attack is of an AOE nature, and a blue circle with three outlines appears as he tries to perform this attack.

Protect yourself by moving away from the area of attack.

Bifrost Boulder Throw Attack: Heimdall will throw a boulder toward your location from the surface. The boulder is affected by Bifrost and moves at a slow pace.

Heimdall’s hands will indicate the usage of the ability as you will see a purple light coming out of them.

The best way to protect yourself is to get away from the boulder, which is unblockable.

How to beat Heimdall

Heimdall is designed to be only defeated using the Draupnir Spear. You will have already unlocked the weapon by completing Forging Destiny beforehand.

Most of this fight will involve you throwing spears at Heimdall before detonating them. The trick is to have spears in place on the ground where Heimdall is going to move to. When he gets close, detonate the spears.

As you detonate the spears, Heimdall will get stunned for a brief period. Keep these attacks on and break the guard of Heimdall and move into phase 2 of the fight.

You should dodge the Bifrost sword slam but not get much away from him. As he performs his attack, Heimdall becomes vulnerable, and that’s your chance to land a perfect combo of melee attacks. The same vulnerability is seen when Heimdall goes for the stabbing attack.

You must always try to dodge the Realm Shift attacks from Heimdall and ensure that you are dodging sideways. This will open an attacking opportunity and protect you from the fast melee attacks followed by the Realm Shift ability.

Once you defeat Heimdall in the second phase, you will have to fight him again in Phase 3, as he grows back his arms and performs more fast attacks.

The main essence of the fight remains the same. You just have to protect yourself using blocks and dodge the incoming attacks of Heimdall. Do take advantage of his vulnerability as he becomes during the usage of different abilities. Parrying his melee attacks opens the window for you to low-land heavy Runic Attacks. Take full advantage of such situations.

Keep protecting yourself, and combine it with your melee attacks to get done with Heimdall.

Gulltoppr’s and Heimdall’s rewards and loot