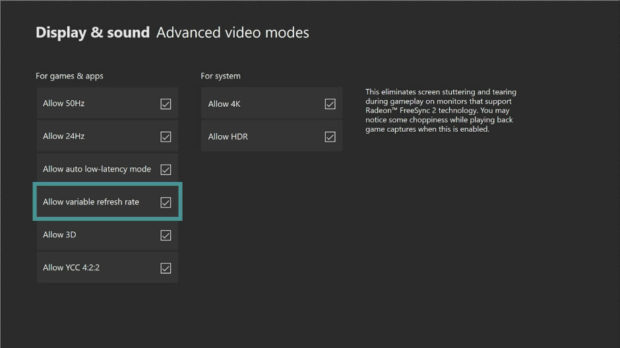 Last month Microsoft revealed that soon Xbox One S and X will soon support Freesync displays and now the Freesync display support has now been rolled out to all Xbox insiders to test out the feature for themselves.

For those who don’t know, French display support for Xbox One S and Xbox One X will remove the screen tearing during gameplay while allowing to play games at variable framerates.

We’re excited to announce that we will be supporting FreeSync on Xbox One consoles, and we would like your help to test out the feature! This is currently available in all Xbox One Preview Rings, and all you need to do is connect a monitor that supports FreeSync over HDMI to start seeing the benefits in-game.

It makes sense that Xbox One S and Xbox One X will support Freesync displays since Xbox uses the AMD APU and this would be the first time a console to support such a feature.

Speaking of the Xbox One, Pubg Corp will be rolling out PUBG Xbox One Update 12 tomorrow.

The update will bring partially “optimized vehicle system” along with a fix for voice chat crash issue along with optimizations and Crucial Bug Fixes.

Furthermore, The Division Xbox One X support is coming on April 12. While the devs didn’t go into details but, did reveal that the game will feature 4K rendering, higher Anisotropic Filtering, improved reflections, screen-space shadows and object detail on Xbox One X.

What do you think of Freesync display support coming to Xbox One S and Xbox One X? Let us know in the comments.