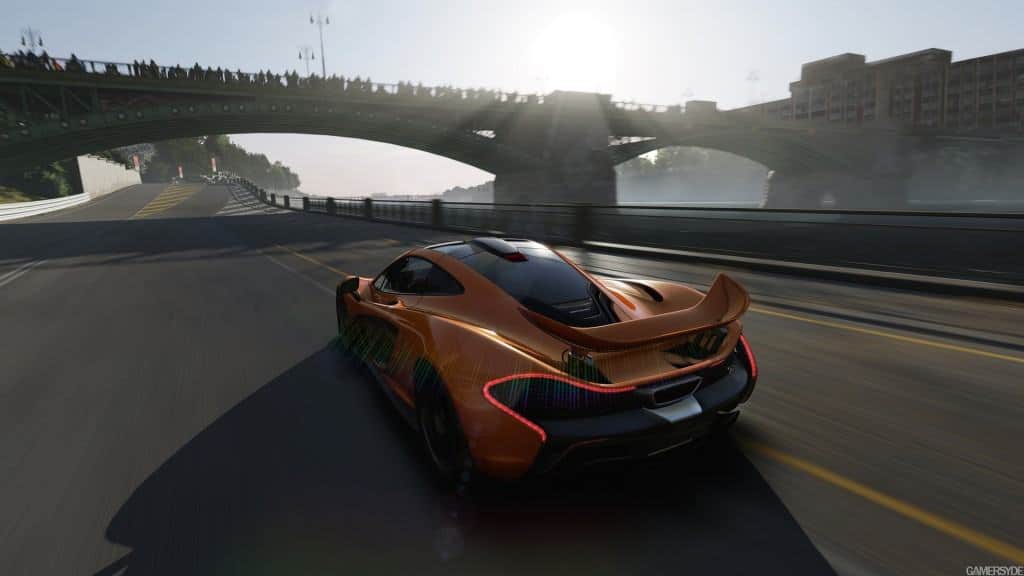 Forza Motorsports 5 is one of the launch titles of the Xbox One and has proven to be immensely popular.

We’ve got an amazing stable of nice cars to play around with, and the new graphical fidelity provided by the much more powerful Xbox One make all the visuals look drop-dead gorgeous.

However, as it is one of the limited number of games for the console, undoubtedly we’ll be seeing players try out the game for the very first time. As such, we’ve decided to write up this guide, which delves into the basics of your car and how to upgrade it, which may be a bit baffling for many.

Car Basics
Each Car is divided into classes; D, C, B, A, S, R, P and X with D being the worst performance-wise and X being the best. This score is dependent on the car’s Performance Rating, a number that is calculated based off the car’s Speed, Handling, Acceleration, Launch and Braking.

This does not mean, however, that a lower-class car cannot compete. The rating given to a car is based off the stock parts that it has by default, it does not take upgrades into account. You can easily stick a better engine and tires on a D rank car to boost it up and make it much better.

You can use Driving Assist to let the computer control the acceleration and braking systems, allowing the casual driver to focus solely on the steering aspect of the race.

You can upgrade the cars that you get in Forza and improve their overall performance. This is done by using the upgrade shop to purchase new parts for the vehicle of your choice and installing them.

You can preview the changes as well, and are provided with some handy graphs and statistics that will give you the information that you need in order to make your decision.

Air Filters
If you change the Air Filters of a car and replace them with better ones you can see a marked difference in the overall Horsepower you get. It’ll also change the sound that your car makes.

Intake Manifold and Throttle Body
The Intake Manifold is basically the part which mixes the fuel and injects it to the engine, as such, having a good one will further increase the amount of horsepower you can coax from the vehicle.

Throttle body has a related function, as it controls the amount of air that enters the system. As such, both affect the horsepower to a significant degree.

Fuel System
Having a better Fuel system means that your car’s fuel is being fed as efficiently as possible to the engine. This is a vital component for maximizing horsepower.

Ignition
A good ignition system will help the engine burn the fuel that is injected into the pistons more efficiently. This produces more horsepower.

Exhaust
This changes the sound of your car and boosts horsepower. A good exhaust system lets the engine exhale more freely, and give you an overall boost at straights when you’re going at the full speed.

Camshaft
Camshafts affect the maximum rpm that your engine can rev at, which creates more torque and horsepower. This upgrade is rather dependent on your style of driving.

If you’re the kind that keeps his rpm up high, a bigger camshaft will benefit you, but if you drop rpm often, then a smaller one will be beneficial. Bigger camshaft in a car with lower turn speed will not have enough torque at the turn exit because it will be below the maximum power band.

Valves
Valves are also important for fuel intake and exhaust gas flow. A valve that doesn’t match the level of the rest of the engine often holds the entire system from achieving the pinnacle of performance that it is capable of. Again, this is an upgrade that will benefit those who stay in the high-rpm range more.

Displacement
Displacement upgrades reduce the amount of friction and inertia in the engine, making it more durable and minimizing damage over time. The upgrade boosts the horsepower to a great degree.

Pistons and Compression
This is another upgrade that comes down to driving style.

Oil and Cooling
This upgrade straight up adds horsepower to the car.

Flywheel
For the most part, you’ll want to upgrade to lighter flywheels. Lighter ones boost your acceleration and give you fast engine response times. However, heavier flywheels give you steadier speeds.

Brakes
Obviously, the brakes on a car are probably one of the most important components.

Springs and Dampers
When you add power to the car, you’ll obviously need a better suspension system and better damping so that your own horsepower doesn’t work against you.

You’ll want to upgrade the springs after a significant increase in horsepower. This also has the effect of lowering the center of gravity, making the vehicle more stable.

Anti-Roll Bars
There basically stabilize the car in the front and in the back. They tie the left and right sides of the suspension together, align the car ride more level. There are several settings and they all contribute the increasing or reducing under-steer.

You can choose between Soft and Stiffer Bars and benefits are:

Weight Reduction
This upgrade straight up makes your car better. This will remove nonessential components and replacing stock parts with lighter materials and make your car accelerate, turn and brake faster.

Clutch
As the crucial link between the engine and the transmission, upgrading the clutch will increase its ability to handle the torque being produced by your car’s powerful engine without taking so much damage. You’ll want to upgrade this right alongside the engine.

Transmission
Having a good transmission means faster, cleaner and smoother transitions from shift to shift. A good transmission will reduce friction and power loss, meaning that you lose less speed when changing gears and also get better durability in the process.

Driveline
This little upgrade will allow you to take full advantage of the engine. You can change the response of the throttle and acceleration by decreasing the weight and rotational inertia of the driveshaft.

Differential
Differential is a curious thing, and it has to do with the kind of turns that a car must make in a race. See, the inside edge of a tire covers less ground than the outside edge. This creates a bit of an imbalance and the differential system is put in place to make things a bit easier.

If you are driving a FWD Car, stiffen up the front different acceleration to force more power to the outside wheel but it can result in understeer if you put too much power to the front wheel.

Soften up the front differential acceleration to let inside wheel spin.

If you have RWD car – stiffen up your front differential acceleration to force more power to the outside wheel but it can result in oversteer if you put too much power.

Tire Compound
This affects the material that your tires are made out of. A softer compound will heat up and stick to the road during races, giving you better grip but making it more vulnerable to wear. The stock tires are tougher, but have less grip.

Rear Tire Width
Grip and friction are directly proportional to the amount of surface area that is touching the road. This is something we all learned in high school. As such, wider tires will generally give you better grip.

Rim Style
At first, this may only seem like a stylistic choice, but the design on the rims affects overall weight of the tire and its handling and rotational inertia.

Rim Size
Choosing the size of the rims of your front and back tires is surprisingly important. Larger rims are less prone to deforming and improve responsiveness. However, they can increase unsprung weight.

Front Bumper
The bumpers on your cars can range from purely cosmetic to purely practical.

They have a significant role in shaping the airflow underneath your car, which creates down force that keeps the car firmly stuck to the road and prevents it from flying off into the air when it’s traveling at extreme speeds.

Rear Wing
This also fulfills a similar role in keeping your vehicle grounded by adjusting the down force and airflow at the back of your car. However, be aware that it will also affect the drag on your car.

Try to figure out if you really need the addition for the track that you’re about to race on.

There is a trade-off between aspiration conversion and drivetrain swap. The former improves your overall handling while the latter gives you raw power. Remember that winning performance calls for a balance between power and handling.

You can go with hit and trial to find the perfect match between your driving style, track and car type. You need to consider all three to come up with optimum upgrades that help you win races. If you have recommendations or tips about these upgrades, share with us in the comments.