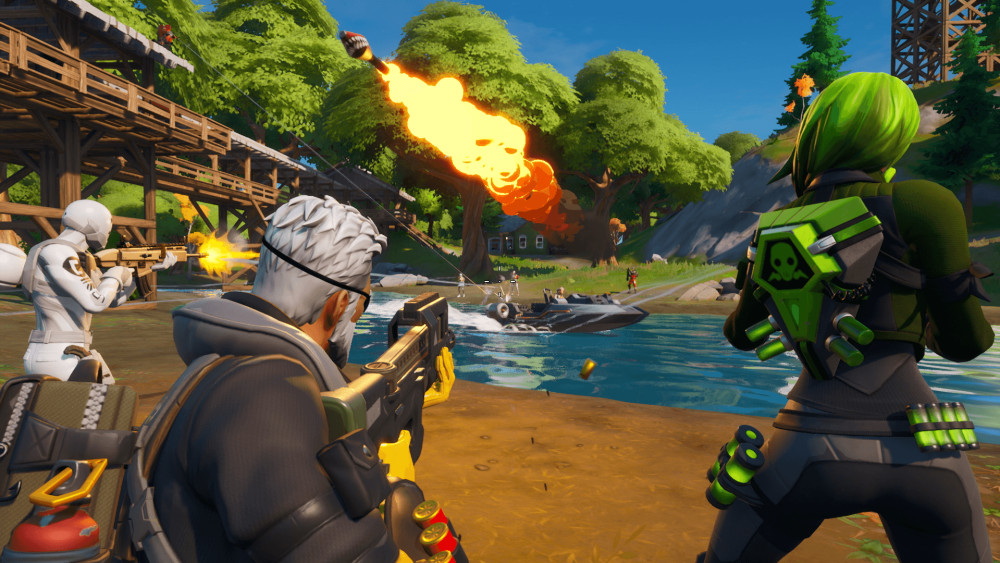 With the end of Season 10 and the beginning of season 11, or as it is officially called Chapter 2, Fortnite has gone through quite an overhaul; many weapons and items have completely been removed from the game. Players are bound to feel quite jarred by the sheer amount of changes and subtractions. Our Fortnite Chapter 2 guide will help you in finding the best guns that you can use to win in the ‘new’ game.

After having many of our favorite guns vaulted, players were, understandably, a little peeved, so to appease the fanbase, Chapter 2 features several new weapons, in addition to the weapons that haven’t been vaulted. The following are all the new guns available in Fortnite now:

Bandaid Bazooka
The most unique of the new weapons available in the game; the Bandaid Bazooka will take up two inventory slots – yes, two – but it isn’t a weapon per se. It functions as a healing item, the one who has it equipped can fire bandages at their teammates and instantly heal them. It’s the perfect item for Squad Matches, not so much for Solo play, however.

Pump Shotgun
After the removal of the pump-action shotgun in season X, fans will be ecstatic to see something similar in the new update.

Bolt-action Sniper Rifle
A common or uncommon weapon that can be trusted to do a large amount of damage to the enemy.

Sniper Rifle
Another sniper rifle, one that has a higher rate of fire but is not as trustworthy in long-range as the previous one.

Assault Rifle
The assault rifles from the previous map return with the addition of a new legendary burst rifle, the AUG, with really high damage and rate of fire, even for a burst weapon.

Rocket Launchers
The Rocket Launcher is an interesting new addition, as it is not as rare as one would imagine; either grey or green, this item will become a more common commodity.

Pistol
The newest handgun is either of purple or gold rarity, meaning that it is a powerful weapon capable of doing immense damage. It is also semi-automatic, making it a valuable and desirable weapon.

Best Weapons
Now it’s time we take a closer look at all the new weapons released so far and see which of them can be coveted as the ‘Best New Weapon of Fortnite’, and likewise learn which of these is to be considered as the worst or least desirable.

To preface the following list, it should be clarified that our rankings are based on the usefulness of each weapon and the increases in your chances of victory through your possession of these guns. This means we’ll take a look at their rarity, damage dealt, and overall practicality in the new and unfamiliar terrain of Fortnite.

Bandaid Bazooka
This may be a controversial pick but it’s being placed at the bottom due to the following reasons – it takes up two inventory slots and isn’t technically a weapon. Even though it is classified as a weapon, it is, in fact, a healing item. It may be indispensable in Squad matches (only if someone with a designated role carries it and stays out of harm’s way) but is utterly pointless in Solo matches.

If a team is formed in a way similar to other competitive online games, where they have healers and such, then the Bandaid Bazooka can arguably be the seminal piece of equipment in the entire game.

Bolt-Action Sniper Rifle
Long-range weapons always have a difficult learning curve, many newcomers are simply unable to make full use of such weapons; ultimately preferring close-ranged combat over it. The bolt-action sniper rifle, despite its power, has too much of a learning curve to be recommended to players, especially newcomers.

With that said, if you’re adept with such weaponry, then it’s arguably the best new weapon in the game for you.

Pump Shotgun
Reminiscent of the shotguns from previous seasons, this is a far more reliable shotgun than the one previously listed. Its fire-rate is greater and is a more powerful and capable weapon in close-quarters combat.

A benefit of both shotguns, however, is that they are not exceptionally rare. You are likely to come across at least one shotgun while traversing the new map, so these weapons are most likely going to become your newest best friends.

Sniper Rifle
This may come across as an odd choice but the reason why this is placed so highly is due to the fact that it’s perfect for mid-range combat. It’s not really built to be used in long-range, but the distance it is meant for is something most players will find themselves more comfortable with.

Furthermore, the weapon does immense damage and the increased fire-rate means that players will have less of a difficult time, comparatively, in hitting their targets.

Burst Assault Rifle
Burst rifles haven’t had the best rep in the past, but that may all change with the introduction of the AUG. A powerful weapon capable of taking out an enemy with full health/shield in two bursts. Its high accuracy and DPS makes it the most powerful new weapon introduced in the game this season.

Being an assault rifle, it only requires medium size bullets, which are easy to come by. Therefore, if you are fortunate enough to stumble across the weapon (or get it off of a kill) then you’re set for the rest of the match and have, arguably, the best new weapon introduced in Fortnite Chapter 2

Rocket Launcher
The reason for this weapon’s placement on the list may seem like an odd one, but it’s here because of its lowered rarity. Despite its lowered rarity, which means it will do less damage, a rocket launcher can still be trusted to decimate your enemies. Especially useful when you find yourselves wanting to destroy a large, man-made structure. Its lowered rarity means that you’ll be able to get your hands on multiple of these bad boys in a single match.

The Pistol
Despite its rarity, the Pistol is the best new weapon in the game. The high damage output coupled with the moderate fire-rate makes it the most reliable and powerful weapon so far introduced. Able to chew through shields and health, the Purple or Gold pistol is capable of giving any player the edge if they’re fortunate enough to get their hands on it.

Despite the rarity, it is hard to deny this weapon’s usefulness and power. Furthermore, handgun ammo is very easy to come across, so if you do have this weapon on your person, you’re likely to never run out of ammo! This weapon is, in our opinion, the best new weapon introduced in Fortnite Chapter 2!

For now, these are all the new weapons available in the latest revamping of the popular game. Stay tuned as even more updates will be on the way, all of which will be covered by us.