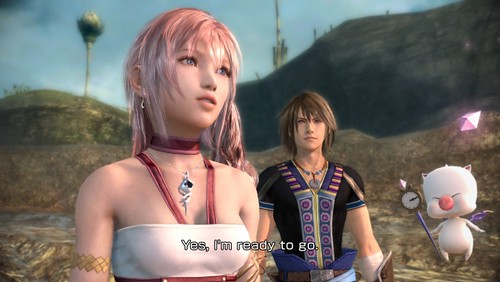 You need to bring these cores back to Alyssa and in return, you will get the respective reward. Returning 3 cores will earn you a Chaos Crystal which you can spend at Chocholina’s shop to trade it for a weapon in the game.

On gathering all 5 cores, you will be able to unlock a gate and earn different rewards. Following guide will help you in finding all cores in different sections of the game.

Graviton Core Alpha – New Bodum AF003
You won’t be able to get this core until you have Moogle Hunt ability and have talked with Hope. In the tidal shallows, move down along the tide and use the Moggle ability to make it visible in the small alcove off the side.

Graviton Core Gamma – Oerba AF200
After fighting with Caius, you can mount a Chocobo and get to the rooftop beside Chocolina’s shop. Look for the core in the north. Use the Moogle Hunt to make it visible.

Graviton Core Delta – Academia AF400
After you have defeated Zenobia, you can find the core in New Town near Chocolina’s shop. The core is masked by red ramp north to the shop so you will have to use Moggle Hunt to make it visible.

Graviton Core Epsilon – Yascha Massif AF100
This one is relatively easier to find. Follow the path of Paddar and you will find the core near a small cliff; you can locate it using Moggle Hunt.

Graviton Core Eta – Sunleth Waterscape AF400
You can locate the core in the northern section of the Assembly area near Miniflan fragment. You need to explore the paths leading to Undergrown and Base of the Crystal.

Graviton Core Zeta – Oerba AF400
In the beach area, look for the core in the eastern section of Schoolhouse on the outer edge. If you want to go to Oreba AF400 then you have to be at Oreba AF300 and for this, you need a portal in Augusta Tower 200 AF 49th Floor. Once you are done with Oreba AF300, you can enter Oreba AF400.

You have to return to Alyssa in Academia 4XX AF with atleast 5 Graviton Cores and you can watch the ensuing cinematic. Now you can go to the Gate southeast and you are going to enter Episode 5.