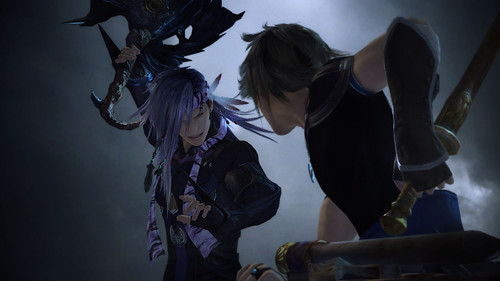 To unlock the Final Fantasy 13-2 Giant’s Fist achievement or trophy, you need to deal 99,999 damage with a single attack. 99,999 damage should appear on the screen from a single strike; don’t confuse it with total damage dealt with a multi-hit strike skill.

For this achievement, control Noel in the battle and make sure he has 800+ attack power. Max out Noel’s abilities and get Futsuno Mitama (You can get it exchange for the ‘Chaos Crystal’ fragment that can be bought from Serendipity) with 3X Power Wrists to reach 1000+ attack power.

Now the second thing you gotta do is to learn Smite and Scourge skill from Crystarium. While in a Commando role, these skill will make you a beast, dealing massive damages in a single hit.

However, these skills need to be mastered as they require very precision in terms of timing. Hence for dealing massive damage in a single deal, you gotta use the ‘Attack’ command on the Monster just at the spot when he is recovering of being Staggered

Make sure Noel has learned ‘Smite’ and ‘Scourge’ skills from Crystarium. These skills help him deal massive damage in a single hit as a Commando (Role). but require precise timing.

Controlling Noel in FF13-2 you need to attack the Monster with ‘Attack’ command when the monster is recovering from being Staggered.

When Noel has 800-1100 attack power and has learned Smite and Scourge skills, find an enemy with lot of Health Power. It will be better to prefer attacking Final form of last boss ‘Chronosavior’ or Long Gui in Archylte Steppe.

Stagger the enemy until it is at 999%. Now, hit it with deprotect to lower its defense and initiate a series of 5x Attack commands with Noel 2-3 seconds before the enemy recovers from Stagger.

If the enemy has deprotect on it, Noel will have enough attack power with Smite and Scourge to deal 99,999 damage in one go. All that left is timing of attack that should sync with enemy recovery from Stagger.

If the timing of attacks coincides with the moment the enemy recovers from Stagger, you will hit a single strike of 99,999 damage and a Giant’s Fist achievement/trophy will pop-up at the end of the battle.

If that doesn’t work, retry and aim for higher attack power. You may also get this achievement/trophy with pure luck as you grid more attack power with Impact Break and Break Burst, which can result into random strikes of 99,999 during any battle.

There is also another way of getting this achievement but that works once you have maxed up your character.

This method involves setting up Noel as the leader and then taking on the Long Gui in the Archylte Steppe. To find him, you gotta set up the weather to Sunny in order to find him.

Then once you are facing him, take out his legs by using the tri-disaster and then go Cerberus. Just before he goes out of Stagger, attack him.

Noel will be using Scourge on him them and pressing Y will do an immediate attack on him dealing a massive 999% damage.