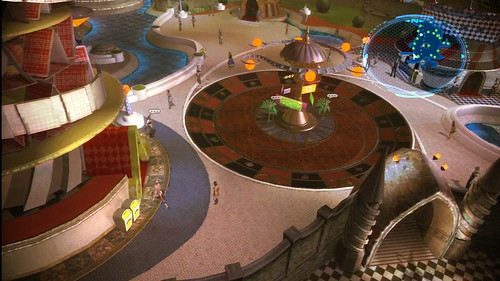 Mystic (Can be found in Serendipity, southwest corner of the map) rewards you with Fragment Skills. To know more, read this Final Fantasy 13-2 Fragment Skills guide.

When you hand-over to him the respective fragment crystals found throughout Final Fantasy 13-2, the Mystic will reward you with skills.

You can read our Fragments Locations guide for a complete run-down of fragments and how to get them.

Following are the Skills that you can unlock once you have collected the corresponding fragments.

Anti-Gravity Jump
The jumping distance and hangtime is increased, it is obtained after episode 5 when saving Noel from the dream world in Dying World 700AF.

Bargain Hunter
You will get a discount of 25% in the shop items; it is obtained after Episode 5 when saving Noel from the dream world in Dying World 700AF.

Battlemania
The chance to fight-off strong & rare enemies is increased; it is obtained after completing the Paradox Professor Side quest. (Academy 400 AF)

Chocobo Music
It’s the music which is played when riding the Chocobo, you will have to gather all the bounty hunter and monster bit fragments.

Clock Master
The game-play and cut-scenes can be speeded up. Collect all of the 160 fragments to have it.

Encounter Master
The encounter rate can be increased or decreased; you will have to collect the Yaschas Massif Fragments.

Field Killer
The battles against the weak enemies are won quickly, it’s unlocked once you have gathered all the academic reward and great mog wisdom fragments.

Haggler
The selling prices are increased; speak to the Mystic at Serendipity.

Mobile Mog
The time of the Mog returning is decreased, collect all the Oerba Fragments.

Mog’s Manifestation
The Moogle Throw is improved, also some bonus rewards. It is also rewarded as you speak to the Mystic (Serendipity).

Monster Collector
The monster crystallization is increased by 20%, Collect all the Vile Peaks fragments.

Paradox Scope
You can invoke a paradox and learn the alternate histories. Unlocked by completing the main story-line.

Rolling in CP
The rate of collecting CP from battles is increased; you will have to gather all Bresha Ruins and Yaschas Massif Fragments to unlock it.

For more help on Final Fantasy 13-2, read our Side-Quests, Serendipity and Equipment Guide.