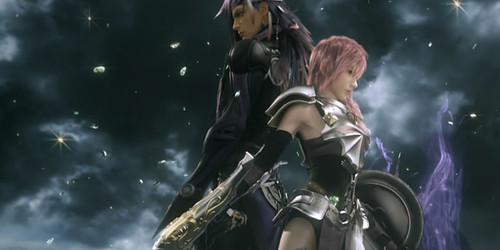 Xan Hisam – A playable demo for Final Fantasy XIII-2 was released on PSN and Xbox Live on the 10th of January in NA and on the 11th in EU. The demo is set in Bresha Ruins from the first game, now sprawling with members of the Academy excavating the ruins to further their research on ‘Time Paradoxes’. I won’t delve deeper into the plot for obvious reasons.

The demo starts with Noel and Serah entering the Bresha Ruins through a time gate. I can’t really say what timeline it is but Bresha Ruins look pretty much like they did in Final Fantasy XIII, except that there are no crystallized flames this time and it’s raining.

You’re thrown into battle with a giant arm after the initial cutscene (and it’s not raining at this point). The first battle involves a number of quick-time events that require you to press the keys displayed on-screen. The better you perform, the greater the benefit you get in a battle in the form of instant damage and/or debuffs to the enemy, or buffs to your party.

You also get unique items at the end of a battle depending on how well you performed in the QTE. The mid-battle QTEs aren’t as detracting to the overall experience as they sound and instead keep things fresh by increasing player immersion.

Battle mechanics function in a similar fashion to the previous game; however, there have been a number of tweaks and additions to it to make it faster and more immersive. You can now change party leaders at any time during battle.

Paradigms shifts don’t take as long as they did in Final Fantasy XIII when shifting Paradigms for the first time in a fight and you have more options to fine tune your allies’ behavior when adjusting Paradigm presets in the in-game menu.

A new damage type has been added that permanently damages a character’s health for the duration of the battle and cannot be recovered by using a Medic’s standard healing spells. To heal ‘Wounded’ damage, special items and/or abilities have to be used. The battle rating system is still present, and gives you slightly more information at the end of each battle.

The Bresha Ruins have a lot of NPCs that you can talk to, and all of them have voice overs. Communicating with NPCs isn’t as pointless as it was; in the few moments in which you actually had NPCs to talk to, in Final Fantasy XIII.

Some of them impart you with information regarding the timeline you’re in, some just tell you rumors of unique items and monsters in typical role-playing fashion. You can also get side-quests from certain NPCs, who will reward you when you complete their task. Some conversations let you choose your character’s response, affecting the outcome of a side-quest or the game’s main plot in some way sooner or later.

Several additions have been made to movement in towns and fields. You can now save the game anywhere using the ‘Pause’ menu. You can jump whenever you want, and some treasures require platforming expertise to reach and obtain.

Your moogle companion called Mog can also be tossed to grab far away treasures that cannot be reached otherwise. Mog can also detect time anomalies in an area and fix them. Fixing them allows you to obtain whatever was trapped in that particular paradox.

Character growth and development has undergone major changes. Primary stats, modifiers and status effects along with character roles remain largely the same. The Crystarium, however, has been reworked. Still quite similar [visually] to the crystarium in FFXIII, the new Crystarium consists of nodes that can be leveled using any one of the game’s 6 roles. The stats you gain depend on the role you level.

Abilities are unlocked when a role reaches the corresponding level required for a particular ability. After upgrading enough nodes, the Crystarium levels up, allowing you to unlock new roles (roles such as Saboteur, Synergist and Sentinel aren’t available from the start) or improving a role’s effectiveness or increasing a character’s ATB or Accessory slots. This allows for greater diversity between the game’s 2 characters, and lets them specialize in certain roles.

Each monster has its own Crystarium, and can be upgraded using certain components. The stats a monster gains depend on the component used and the monster’s personality and traits. The component has to be of the same grade as the monster to be used to level it.

You can also fuse monsters together. Infusing a monster with another one lets the resulting monster inherit abilities from the ones used for amalgamation. For those familiar with the ‘Persona’ series, infusing monsters functions much like persona fusion. Monsters that you have can be customized with accessories as well. Equipping monsters with accessories has no effects on their stats and only alters their appearance.

Every monster has its own unique ‘Fatal Link’ that can be used in battle. Fatal links are much like ‘Overdrives’ and ‘Limit Breaks’ from past Final Fantasy titles. A synchronization gauge has to be filled before fatal links can be used in a battle. Initiating a fatal link starts a quick-time event. The better you perform in that QTE, the higher the final synchronization percentage consequently increasing the effectiveness of the fatal link.

Final Fantasy XIII-2 runs at 1080p just like its predecessor. Character models seem to be better than before, with improved textures and animation. Environments are expansive and detailed, and give off a more organic feel because of animate objects such as flora and fauna hanging atop structures and swaying with the wind.

However, some textures in the environments are bland, and have obvious pixelation problems when viewed from nearby. Weather effects look impressive, with environments looking fresh and varied in different timelines. Character animations during battle were quite amazing to look at and the camera does a better job of capturing the action than it did in the first one. There weren’t any noticeable drops in frame-rate in my time spent playing the demo.

It seems like Square Enix has listened to a lot of player feedback, improving upon almost every aspect of Final Fantasy XIII to make the sequel more of how players wanted the original to be. Battles are faster, more dynamic and require more input from the player. Environments are beautiful and expansive, brimming with people to talk to, secrets to uncover and treasures to obtain.

To sum it all up, the demo felt more reminiscent of FFXII and its non-linear, open-ended approach towards how you wanted to progress rather than reminding you of your time in Bresha Ruins in Final Fantasy XIII. We’ll keep you updated with more information on Final Fantasy XIII-2 after it releases on the 31st of January!