How To Score A Flair Shot In FIFA 23 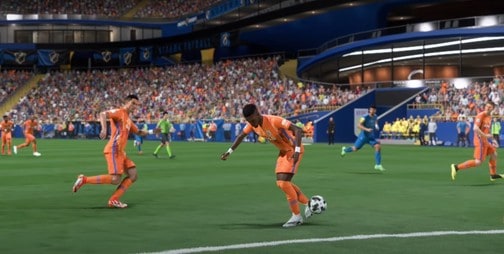 The Flair Shot is another amazing shot that FIFA 23 adds to its game to amaze the players. Now with the addition of the Hypermotion2 system, the smoothness you feel while playing the shot is on another level.

We have prepared this Flair Shot guide to tell you how to perform and score with this shot in FIFA 23.

Flair shots are your typical shots in FIFA 23 but they come with an additional mechanic. Instead of shooting a ball, players will execute a flashy animated shot that ranges from a rabona to a bicycle kick. This entirely depends upon what the scenario is and how the player utilizes this attribute.

How to score Flair shots in FIFA 23

It is a flashy shot that you can do whether the ball is in the air or ground. Just the type of Flair Shot will change this way, but you will still enjoy it.

Whenever you do a Flair Shot, the audience goes crazy, doubling this shot’s overall experience. It will give you both style and power to score a goal and hit one of the many celebrations that are available in FIFA 23.

To perform this shot, you must press a combination of keys. The keys you need to hit to do the Flair Shot in FIFA 23 on different platforms are given below.

Now, if you are looking to nail this shot and score a goal to hit one of the many celebrations of FIFA 23, you will need to time it ideally.

Simply pressing the controls on the different platforms wouldn’t do it for you. Firstly, you must ensure the character you are using to perform this shot has impressive stats.

Ball Control, Agility, and Finishing are some stats that affect how you perform this shot. Secondly, to perform a great-looking shot always hit the key combination when you are close to the goal.

If you perform this shot close to the goal, you will hit the celebration we talked about earlier. The Flair Shot can also help you take away the ball from a defender, but we will not recommend doing so too often.

There is always a chance of losing the ball while performing this shot. So even if you want to dodge the defender, do it with a player that has a high rating.