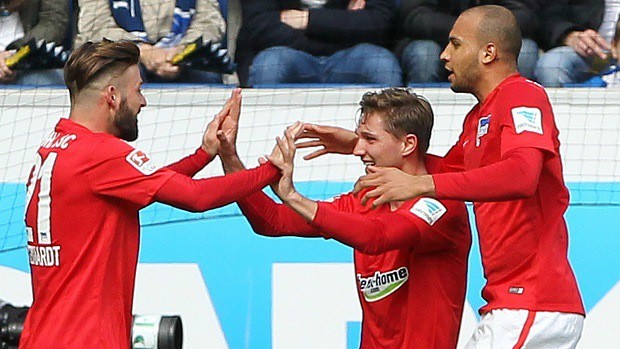 We have here a list of the best players that you can choose the early game for as low as just 15 thousand coins. With this build, you can jump-start your FUT Bundesliga journey, easily climb up the ranks, and eventually upgrade to better players.

These are the not the cheapest players in the game but they have good stats in their respective price range except one player which will cost you a couple of thousand coins.

GK – Lukas Hradecky
Your goalkeeper for this Bundesliga Build will be Lukas Hradecky. He plays for the Finnish National Team as well as the Eintracht Frankfurt.

CB – David Abraham
Your first CB is going to be David Abraham who plays for Eintracht Frankfurt. He is a cheap and reliable defender.

CB – Niklas Stark
Your second defender will be Niklas Stark who plays Defensive Midfielder for Hertha BSC. He is also a good and cheap choice.

LB – Erik Durm
Erik Durm is going to be your Left-back for this build. He plays for Borussia Dortmund and Germany’s National Team.

CDM – Jonas Hector
Jonas Hector will be playing as your CDM in this build. He is a decent CDM and he plays for FC Koln and the German National Team. He will be your only CDM for this build.

CM – Nabil Bentaleb
Nabil Bentaleb will be your first CM for this build. He plays for Schalke and Algeria National Team.

ST – Julian Brandt
Your first striker for this build is Julian Brandt. He plays for Bayer Leverkusen. He is a solid offensive player for your starting Bundesliga build.

ST – Divock Origi
One of your strikers for this build will be Divock Origi. He plays for VFL Wolfsburg borrowed by Liverpool and for the Belgium National Team and is the perfect choice as a striker for this build.

This concludes our FIFA 18 FUT Cheapest Bundesliga Squad Build Guide for Beginners. If you want to add anything to this guide, feel free to use the comments section below!