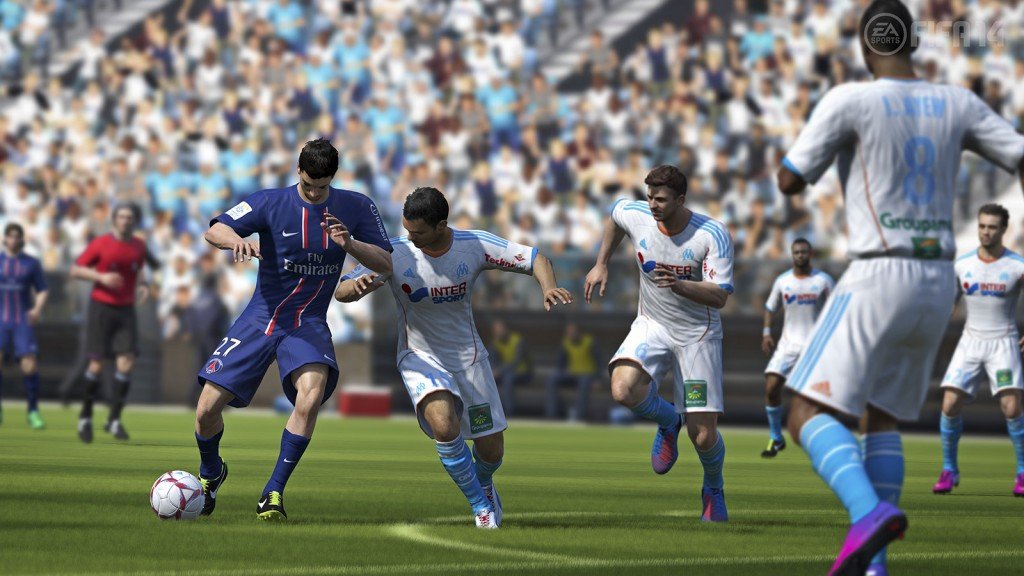 Some people believe that attack is the best strategy of defense. I won’t completely disagree with it but being too aggressive in FIFA 14 will make you more vulnerable than its predecessors.

The question is, how to be attack minded without being much being exposed in the defense? There is no ultimate way of doing that but there are a few things that you can do to keep it balanced.

For more help on FIFA 14, read our Free Kicks.

Following tips can help you improve your attacking approach in FIFA 14:

Be a Good Finisher
The first thing you should focus on is your finishing. If you aren’t good at converting the available opportunities, your attacks aren’t going to do any good. You can refer to out shooting guide to learn more about finishing.

Formations (Aggressive or Defensive)
Formations play a crucial role in deciding your aggressive play. 4-3-3, for instance, is a formation I will recommend if you are lagging behind, or you want o have an upper hand earlier in the match. This will make your back line vulnerable to counters, but if you know how to rotate possession, you can do well this formation. However, that’s just my thought. You can choose the formation of your liking and tweak it according to your own wish.

Wing Play
If you aren’t good at rotating ball in the midfield or your ball control isn’t that good, I will recommend the wing play for you. There are some teams in the FIFA 14 who facilitate the wing-play a lot. PSG, Real Madrid, Bayern Munich and Arsenal are few examples of it.

These teams basically have fast wingers and they have attackers in the mid who can score goals with the head. So, you use the sprint speed of the wingers and then deliver the crosses into the box. There are many players out there who only use this strategy.

If you are using a rolling through ball, make sure that your attacker has sufficient space to run after the ball, and he won’t be blocked by the defenders.

Aerial Through Balls
Aerial Through balls are most commonly used methods of scoring goals. You hold the switch player button and then press the through ball for an aerial through ball. If you have world-class strikers up front, you can be devastating with these passes.

Messi, Ronaldo, Neymar and Benzema are the few names who are quite good at receiving these balls by beating the defenders with their pace.

Move Along the Flow of the Game
Some players don’t bother to change the formation they are playing with throughout the match. That isn’t a healthy practice. I will recommend you adopt according to the opponent you are facing.

You should not hesitate to switch to a more attack minded formation when you are lagging. Once you are in the lead again, you can switch back to the normal formation.

Team Mentality Alteration
You can also control the mentality of your team without pausing the game. Do use it when it’s needed. From the balanced state, you can go to either ultra attacking mentality or choose to be ultra defensive.

If you are playing online, your opponent won’t be able to predict these changes easily so you can use this change as a tactical weapon. Thumb pad is used (left and right) to alter the team mentality during the game without pausing.

You can also vary other tactics like wing-play, pressurize or counter-play on the go, but I will discuss them in detail in the other guide.

Be Unpredictable
While moving towards the opponent’s goal, try to be unpredictable. For instance, if you are running along the wing in opposition’s half, the obvious assumption of the opponent will be that you will cross the ball into the box.

You can do the opposite and try to beat the defender first with dribble. Next time, you can change it and cross the ball in while he would be expecting you to dribble first. By doing this, your chances of scoring goals will be increased.

Rotate the Ball More Often
If you like the build-up play (pass, pass and pass), again, don’t be predictable. Don’t go for the obvious passes too often. You can add a couple of additional passes before you add the killer pass. This can also be beneficial as you can commit more players forward for an attack.

Pass and Run
Pass and run technique (Switch Player Button + Pass Button) is spammed by the player which is actually a double-edged sword. It’s quite an effective one-one-one passing method, but if you do every pass by pressing switch player, you will be highly vulnerable at the back if the ball gets intercepted in the midfield. So proceed cautiously.

I only use pass and run when I am in the opponent’s half so that I can commit more players towards attack.