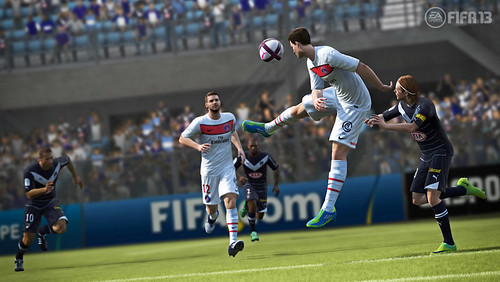 FIFA 13 has hit stores and is selling like hot cakes. If you want to become the very best, you will need to follow these FIFA 13 Gameplay Tips and Strategies.

Now the question is whether the game has any significant changes, or it’s just a tweaked replica of its predecessor? The answer is yes; the game play is much different than FIFA 12. While the first touch control system can be a pain in the ass, the improved AI, both in Attack and defense quadrants has made the game more fun-to-play.

The precise dribbling, skills and tricks are important but there are other things that if you pay attention to, can make you a more competent opponent to deal with. I am talking about the essence of football here that is to keep your squad aligned while passing, attacking and defending. Confused? Don’t be as I am going to discuss these elements individually.

For more help on FIFA 13, read our Tricks and Ultimate Team.

Passing
Being an Arsenal fan, I am aware of the significance of ball possession and short passing. Although FIFA 13 let’s you beat defenders with great precision using the tricks and skills, the defenders with more strength and better tackling abilities won’t be easy to get passed.

So, if your high flying and accelerating moves by top class players aren’t working, you are bound to use the old school passing techniques.

The sort of passing you need depends on multiple factors like the team you are playing with and type of players present in your squad. The easiest option that usually suits most players is through wings.

If you don’t have quick wingers in your squad, you can increase the number of players in the midfield (choose a formation with five midfielders) and then pass the ball around.

It’s the basic principle that more possession you have, the more you have the chance to score the goal and lesser chance to concede. If you are patient enough, you will inevitably get chances to score.

Power of the pass wasn’t that important in FIFA 12 but in FIFA 13, you will have to keep your thumbs steady due to the new first touch control. If you are passing the ball with too much power, it will be difficult for the players to control the ball, and you can end up with a ruined attacking move. Furthermore, try to keep hold the ball first before you perform your next move or pass the ball further.

If you aren’t getting many goals from crosses, then you need to change your strategy a bit. I hope you know that there are multiple ways to cross the ball in from the wings. If you can’t get the header, it’s never a bad idea to get in a rolling cross (by pressing the long pass button thrice). This can give the strikers a good chance to toss the ball into the net.

Attacking
If you are playing with big guns like Barcelona or Real Madrid, etc., you will have plenty of attacking options to choose from but with the clubs having not many high stat players, attacking tactics become more important. You can make use of the quick tactics option to make the counter attacks more effective.

If you are good at defense, you can get with three forwards up front (CF, RF and LF) and create a lot of problems for the opposition defense. This will make you vulnerable in defense so you will have to make sure that you score enough goals to win the match.

If you like to create attacking moves from the midfield, having a CAM along with CDM can work quite effectively without your defense being exposed too much. If you have attackers with good heading ability in your squad, you can also switch to wing-play and use the extra pace you have got in that quadrant.

Ground through balls can be effective but if the opposition defenders are good at intercepting passes, air through balls come into play. Strikers with better sprint and agility can beat the defenders and quickly latch onto the air balls and score goals for you.

Shooting in FIFA 13 has also been tweaked a bit. In one-on-one situation, if you aren’t comfortable with beating the keeper first, you can go with the Finesse shoot or the tricky chip shot. You should go for the chip when you are free at the edge of the box and see the opposition keeper charging towards you.

Inside the box, chips are usually saved, or you end up shooting the ball off target. The Finesse shot, however, is a more reliable method if you get the timing right.

Try shooting the ball along the ground as elevated shoots have greater risk of going wide.

Defending
Defending is a big problem for many players as they usually like to attack and score goals. There are a few things one should consider having a strong line of defense. First, don’t call out your defenders to tackle until it’s absolutely necessary. Only choose the center backs when you find that the opposition player has gone past the midfield, and you need to block him down.

Random player selection can open a lot of gaps and make you more vulnerable in the back. Try to counter players with the similar positions. For instance, if you are using your center backs to tackle wingers, this can make you vulnerable in the center, and you can concede goals from headers.

If you find yourself in a situation when opposition has more attackers than your defenders, you can gamble and call your main defender forward quickly to leave the attackers in an offside position.

Another good trick to stabilize your defense is to have a CDM with good strength and tackling ability. Man City’s Yaya Toure is one good example. Just make him run at the strikers, and he won’t disappoint you. You can also make use of the custom tactics option to organize your defense more, but that can have a negative impact on your team’s aggression.

Accurate tackling is also very important to reduce the conceded goals’ count. Generally, you will use the contain button to keep up the pressure on the opponent and when you find the opportunity, you can press the tackle button. If you are pressing the tackle button randomly, it will leave open spaces as players take some time to recover after the empty tackle. So, press it to tackle the ball.

The push and pull system in FIFA 13 has also been modified a bit. Now, you can intercept the shoots of the strikers from behind, but that is risky as if you miss time the tackle, you can will concede a penalty. Outside the box however, you can make use of this feature to pressurize the opponent and force them to make some passing error.

If you are not good at tackling other players, you can also make use of the auto-tackling ability of some players. It’s hard to implement but once you understand the function; it can make your defense stronger.

If you are near an opponent player who you think is about to get past you, you can switch your cursor immediately to the nearby team player. The old player (if close enough) will tackle the ball based on the AI which to be honest can be more accurate than the manual tackle.

Dribbling
There’s no better way to hold on to the ball than dribbling. You can skill dribble by holding both triggers when facing the goal. You need to do this while moving around in order to keep yourself out of tight spots when opposing players start surrounding you. You’ll be able to sidestep incoming tackles before you pass the ball or go for the goal.

Try to keep your movements unpredictable by running back and to the sides as your opponent tries blocking you from the goal. If you want to change direction, you can hold LB or L1 while stationary to keep dribbling the ball and then move around it.

Use face-up dribbling techniques to throw off your opponents while moving. For example, if you’re running towards the goal and another player is about to catch up to you, you can slow yourself down for a brief second and allow the opponent to run past you. As you’ve probably already gathered; timing is everything when it comes to nailing this move