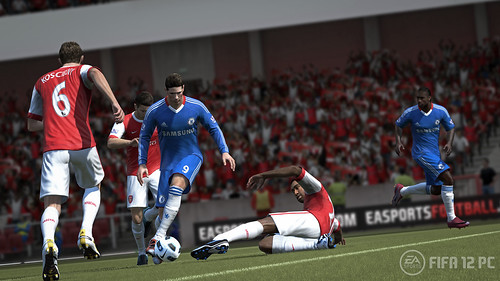 FIFA 12 has hit the stores, and though it remains a continuation of the infamous series by EA Sports, it has brought quite a few changes, which in-turn demand changes in how you play the game.

FIFA 12 is still a soccer game, but as a sports-sim, it has changed significantly thanks to the added amount of realism – not just in the graphics, but also in how the players behave, their handling and the hence the entire strategies for success.

It can truly be a daunting task to pick up the game as a beginner and start playing against other FIFA veterans. In fact, even regular FIFA players have had to make changes to their game-style to attain success in these heavily changed mechanics.

Well, to get started in the game and potentially become a skilled player, we believe you should follow these tips to ensure a good start and improve your skills:

Precision Dribbling
Precision Dribbling just changes the way you play FIFA 12. It helps you keep possession in tight situations like close to the sidelines, goal line or to beat the defenders or when you need to get rid of your marker.

It is automatically activated in response to the situation you are in, but if you want to manually use it, press LB while dribbling. Be smart and use your skills to intelligently evade defenders and create a goal scoring opportunity.

Pushing and Pulling
Pushing and Pulling has been part of Football since the old days. Even today, it can be intelligently used against the attackers. When you are in a shoulder to shoulder challenge, press B to do a standing tackle.

Standing Tackle can be a shoulder challenge or a small tug. It’s enough to knock your opponent off-balance but be careful, as mistimed tackle will leave you out of position.

Contain
FIFA 12 changes how you defend a ball inside the circle. Defending is no longer automatic and you will have to learn to time your tackles if you don’t want to concede goals.

You contain attackers in two ways: Simple Contain places your controlled player in front of the attacker and allows you to decide when is the right time to tackle.

Teammate Contain allows you to call a teammate to contain the attacking player but they won’t tackle unless they see an opportunity. You will have to use a mix of these to defend close to circle. Practicing these will make you better at judging the right time to tackle.

Trick Passes
Hold RB and press A or Y to pass to your team-mate. If your player is skilled enough, he will do a flare pass.

Trick Shots
Hold LT and press B, your player will do a flair shot such as a bicycle kick or diving header.

Controlling Goal Keeper
You can press start to take control of your goal keeper. Pressing the same button again will move you back to the full control mode. Controlling goal keeper sometimes confuses the opponent player and saves your goal.

Before you take control of your goal keeper, take a good look at your controls and how you can save a difficult shot at the target. Otherwise a simple shot at target can prove to be a nightmare for you.

Possession
It’s a common saying among soccer players and fans that possession is everything in the sports. Well, it may not hold true entirely in the current era of soccer, but it plays a vital role in attaining success.

In FIFA 12, sprinting and outpacing your opponents while in possession isn’t your primary method of actually maintaining possession and pushing forward. Precision dribbling greatly changes the way you play the game, as now you have to rely on dexterity and a bit of thinking to outsmart your opponents.

Precision dribbling also allows for double-knock. By double-tapping your directional button in a certain direction, the player in-possession will do a double-known. This is very useful for covering distance quickly, and is recommended with fast sprinters.

Normally, when you get close to players, precision dribbling will turn on automatically. However, you can choose to turn it on manually otherwise by using the left bumper/L1 buttons. Combine them properly with the pace control on the opposite right bumper/L2 buttons and you can out-maneuver many folks easily.

Possession Lost
While it’s great to have possession of the ball, you can’t expect yourself to be doing it all the time in every match. That’s when defensive play comes into the win-factor. When off-ball, the tactical defending concept comes into effect, which is noticeably different from earlier defending systems.

The tackling system – the ‘defensive offense’, is quite different due to the added realism.

Firstly, the jockey moves – both standard and running – still remain. Secondary press for a defender is on the right bumper/R1 button, which doesn’t tackle but is only for coverage.

You can hold that and the AI will track the player with the ball, trying and put him into a position of disadvantage while you can maneuver yourself to try to close down passing lanes.

If you play overly aggressive and perform a lot of tackles, you will notice that with every tackle there is a post-tackle recuperation animation, which prevents you from doing anything for a short while.

Miss a lot and you’ll be wasting time without attaining possession, so the best bet would be to tackle when sure that it’s going to work.

This is a very clever AI system which makes the team try to focus their gameplay in a way as to make best use of these Pro Player Intelligence traits. Tall players will have the AI aligned around them in such way that it will increase the possibility of headers.

Similarly there are other traits, such as playmaker, long-distance shooting and many others, and you’ll see a variety of gameplays, especially when playing against the AI, as the opponent team will tend to make best use of their ‘Pro Player’.

FIFA 12 introduces several new skills, tricks and moves that you can pull off during a match. In this section of the guide, you will find how you can perform these moves on your platform of choice.

FIFA 12 PC Tricks and Skills Tutorial
Performing moves and skills on PC with Keyboard is harder compared to consoles. You will need a lot of practice and good controls configuration to pull these off but this guy does a great job by performing them with default controls. If you want to see how its done, watch the video:

FIFA 12 Xbox 360 Tricks and Skills Tutorial
Amazing work by Hjerpseth. Learn all the Skills and tricks you can perform in this video. Aided by controller animation and demonstration of the skills, this is by far the best compilation of the skills tutorials.

FIFA 12 PS3 Tricks and Skills Tutorial
Goal Tastics does an amazing job for putting this tutorial on how you can perform all these new skills in FIFA 12 with controller animation and commentary. Which makes it one of the best tutorials out there. Also, you get the important insights on when you should perform these skills during the match.

Want to share your own tips ? Why not tell us how you perform these skills on the field.