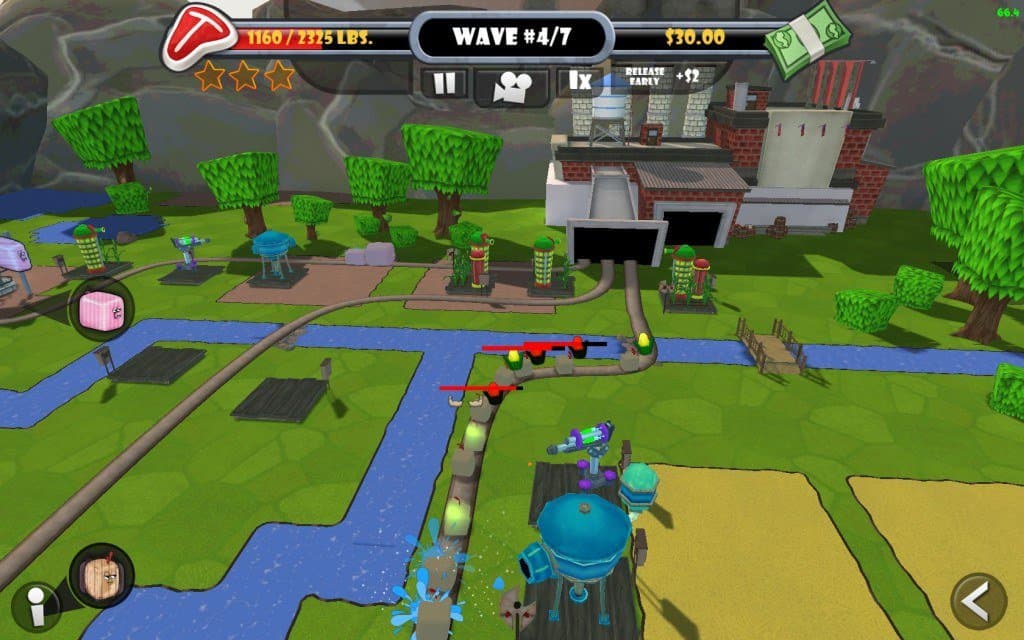 Tower defense is a genre that’s as static in its game design as it is in its innovative states; both are pretty much deadlocked at this point. Yet, games like Fat Chicken, currently on Steam through Early Access, try to use something else than technical aspects to get people hooked. There’s just a smidgen of psychology in there.

There are still the usual suspects of a preset path where targets align, towers with radiuses and a desperate search for funds to continue building. Still, the game puts into question whether going through these motions is the best thing to do, when the end goal is to bring livestock to the slaughterhouse and that by any means necessary.

At first sight, however, Fat Chicken looks like any other run-of-the-mill, mobile-friendly clicker. Simple square shapes, self-colored textures and cartoon cutouts make up the farm locations. Green indicates grass, brown is mud and blue makes water. It’s not winning any medals there.

A low-key presentation might be an asset here, as to blend a darker undertone into the game. In this tower defense, players are tasked with feeding chickens, pigs or cows, to get them ready for consumption. That sounds elementary enough, were it not also the goal to get these animals as plump as possible by literally shooting them full of hormones and feeding them pellets until they explode. Animals aren’t really the target here, just the meat that makes their carcass. Think about that for a second. 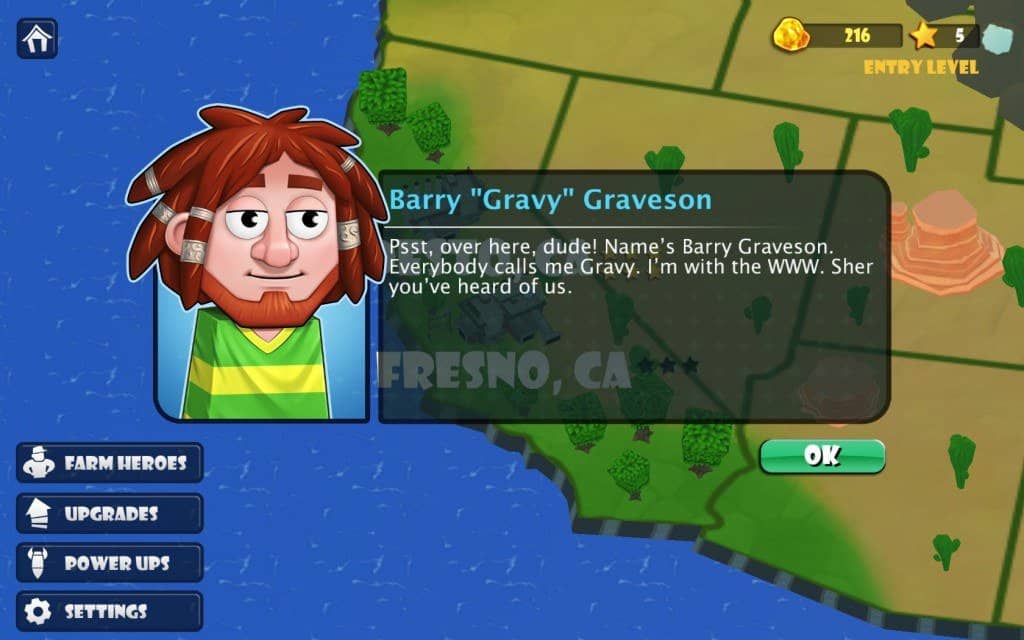 Depending on how juicy critters get to the goal, more money is unlocked to purchase more facilities and possibilities, so it’s also important to run an efficient production line. In fact, some of the levels require a rather strict form of management to prevent goods from dying of a variety of things.

So, to make sure that animals get to the end of the line alive, but not so much well, stations can be set up to make up for where natural resources fail. Sometimes, a pasture will provide food or a puddle will quench a chicken’s thirst, but for anything else it’s up to machinery to do the trick.

Food stations and water towers have a certain circle of effectiveness around them and can target one unit at a time. It’s possible to upgrade these during a round to increase their potency. Additionally, posts can be supplemented with farm hands that also take care of necessary business needs. For instance, a cattle prod can ensure that livestock gets their butts in gear, so that they don’t waste seconds simply meandering down the line. Do this too much, however, and the cow or pig will fall ill and die. There go those nice profits.

It’s equally true with excess in structures pumping creatures full to such an extent that they keel over. Since some towers can hit multiple lines at once, some paths may need to be lighter on food or hormones, so that vessels don’t balloon out of their proportions, because that’d be a shame.

This sets up a certain morality in Fat Chicken. It’s possible to abuse animals to drive profits high, but is it worth pushing innocent creatures to their limits? Is abuse even justifiable in the first place? Periodically, an opposing group will protest the meat producing plant, but as a fresh new employee, it’s hard to decide to just ditch a meal ticket.

Unfortunately, the game in development isn’t quite there yet in driving that point home. All of progress is geared around maximizing profits and as such, it’s harder to connect to the fact that livestock isn’t just a vessel for currency. At most, the punishment for pushing live beings to their extinction point is a little less on the star rating used to upgrade structures in a separate progression system. It’s a bummer, but hardly consequential and therefore negligible.

Prodding, force-feeding and shooting growth hormones become the norm soon enough in the tower defense mechanism and the only differential now is its management. Sometimes, stations need to be relocated on the fly during a wave, because it’s cheaper than building a new one down the line. Another factors to take into account is how a location is set up, where watering holes and grazing pastures are, to prevent starvation. 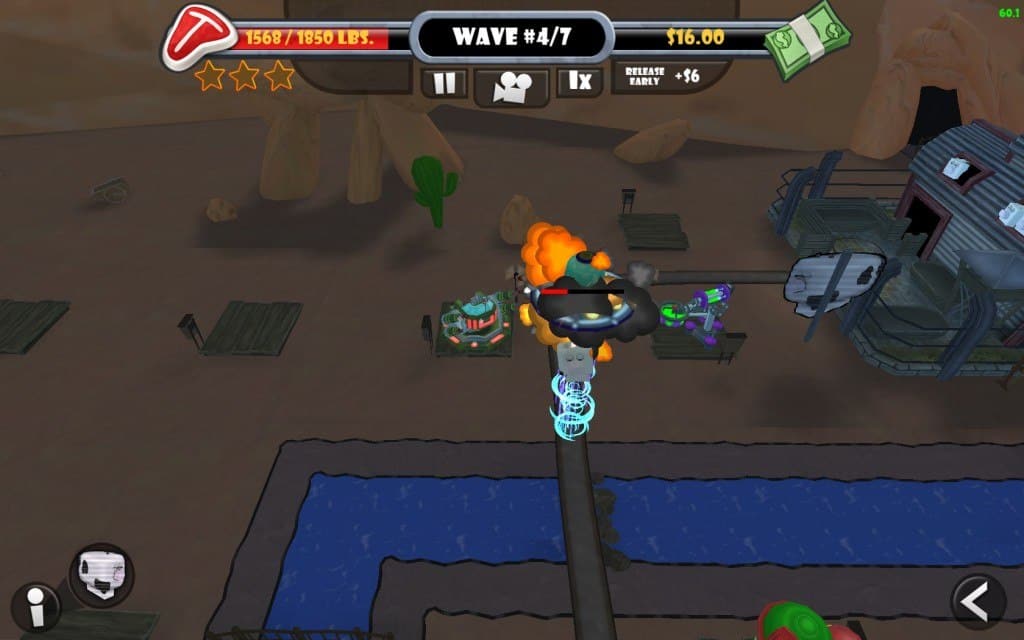 As an additional quirk, later levels throw in more detracting elements, such as protestors or even flying saucers. In the latter case, it’s needed to build flak cannons that otherwise have no use in meat production, to destroy incoming ships. Here, in particular, it serves funds best to just relocate the guns where they’re needed.

There are a few more things to think about. Growth hormones work best in front, so that feeding guns can then take advantage of their work. Expensive bosses can run the assembly lines with their own powers, such as an improvement of overall health or motivating workers to be more efficient. One-time power-ups can also be bought to provide a stimulus, though their cost right now is only fitting as a last resort to meet quotas.

No little spin on design choices here nor there can break Fat Chicken’s otherwise formulaic design. Waves pretty much boil down to the same motions eventually. Build to prevent starvation, transition to profits and then let it go. After a few tries, it’s also well plausible to be swimming in funds, removing management issues and bringing home the usual slog associated with the tower defense genre.

Going for a moral dilemma in fattening up livestock is a step in the right direction, but it needs more immediate reinforcement of the drawbacks of a soulless, capitalist approach to make it stick. If it can merge that with its cute style, it’ll be sure to surprise some players and it’d make more of a social commentary than its merely capable setting does now. It’s close, now bring it home.