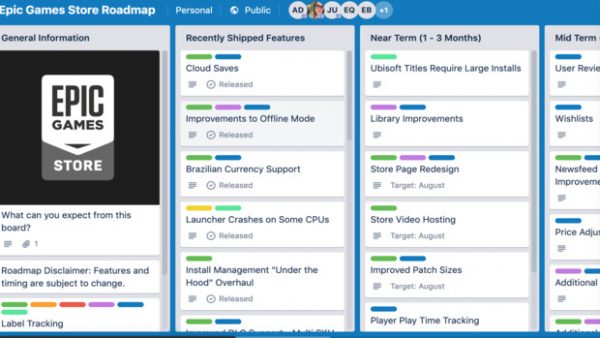 Epic Games Store Roadmap on Trello went through some changes recently. The updated roadmap reveals that Epic delayed most of Epic Store features set for July. The delayed features will now arrive in August.

With that said, Epic managed to release only two promised features in July. These features include improvements to offline mode and cloud saves. Further, it’s disappointing that cloud saves are not yet available for all games.

Cloud saves are enabled for a couple of new games right now. We have a bit more work to do before rolling it out more widely.

The feature is currently only available for Epic Store free games like Moonlighter and This War of Mine. For those who don’t know, cloud save is a very handy feature. Cloud save will backup your game progress online in case you lose your data somehow.

In case you are wondering, the delay is on Epic’s side. Epic’s Tim Sweeney Tweeted to confirm that the team needs to do more work to enable cloud saves on more games. Further, Sweeney has confirmed that the game developers will not need to update their games to enable cloud feature.

Here’s the latest update of Cloud Save feature according to Epic Games Store Roadmap:

“We’ve shipped the V1 implementation of cloud saves. We’ll let you know when it’s available across titles that support this feature.”

We can expect the wider rollout of cloud saves to be sometime soon. Whenever it arrives, we will make sure to let you guys know first.

This is the second delay of Epic Store features. Back in May, Epic delayed most of the features by saying that the team is focusing on supporting online features for new game launches.

With that said, we are hoping to hear from Epic about the recent delay of features.