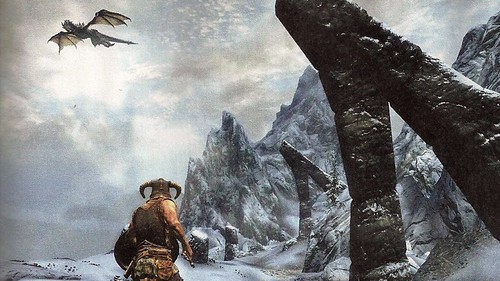 Elder Scrolls V: Skyrim – Since its reveal in Gameinformer magazine, it has been consistently making buzz about everything Elder Scrolls. The game engine has been improved to provide better visuals. The gameplay has been enhanced to make it more dynamic. Game AI has been improved to make the game world behave more intelligently to every thing that affects them. Skyrim is going to be one of ‘The Games of this Year’ if you take everything you know about the series in perspective and think of Bethesda developing the game. Here is our rundown to all things Skyrim.

Elder Scrolls V: Skyrim is set in the city of Skyrim, located north of Cyrodil. It has snowy climate and is the home of Nords. The story is set 200 years after the events of Oblivion. You play as a Dragonborn (a dragon hunter) mentored by the last living Blade member. This all is the in the midst of a civil war waged by two brothers for the throne after the king dies.

Skyrim has been developed on a brand new engine with improved visuals. Trees are more detailed (and they have fixed branches and leaves). Wind is used to determine the flow of water and the direction in which leaves point. Also, there are now dynamic shadows.

Combat gameplay is more dynamic in Skyrim. Bethesda are working hard to make sure every weapon type feels different to play with. The game will now allow you to smith your own weapon out of red hot iron. Dual Wield may be present and weapons on top of that will have unique finishing moves.

There are 5 “massive” cities you can explore. You can do all sorts of things in cities, including cooking, farming, mining, woodcutting and blacksmithing, but exactly how these will work is yet to be described.

There are now 18 skills to choose from (3 less than Oblivion). The skills will be tailored to you, so if you would like to be a powerful mage, you would be able to put up the skills relevant to you, but there is also room for people who like all the skills. The game now has perks, similar to Fallout 3. You can choose a perk when you level up, and you can also choose to put up your health, or stamina upon leveling up. Once you have reached level 50, it will be harder to level up, and you won’t be able to select new perks.

NPC’s are more dynamic and interactive. When you talk to someone, the camera won’t zoom into their face, they will instead they will behave like humans and move around do stuff while taking to you. Depending on where you drop something, NPC’s can interact differently with it. For example, dropping a weapon could lead to a child trying to return it to you, it could also spark a fight between men who want to claim it. You can also duel with NPC’s in cities if you get bored.

Quests will be dynamic, multi dimensional. Few of these will be random. For example, an NPC could ask you to find something, the game will check all near-by caves/forts to see which ones you haven’t entered and which ones have suitable enemies, and then the quest would be to go to the selected area and retrieve it. Also, some quests will be tailored to your preferences (magic, combat etc).

There are several character improvements. 3rd person view has been improved and NPC can may feature beards. While creating your character you can customize their appearance just like Fallout: New Vegas. 10 races to choose from, but your class will be dependent on what skills you choose at the start of the game. You can sprint at the cost of your stamina.

Here is some more info about the game from Dutch Power Unlimited magazine.