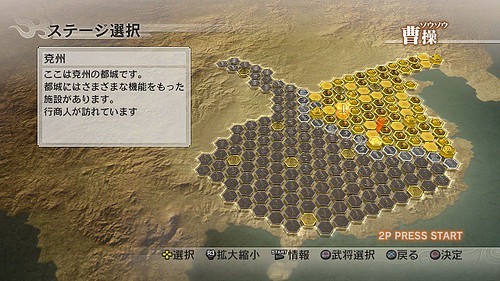 Alright everyone, in this article we’ll be having a detailed look at the Conquest Mode of Dynasty Warriors 7 to make everyone aware of the concept, game-play and interaction in this mode.

For those who don’t know yet, there are two modes in the game – the Story mode and the Conquest Mode. I will cover the Story Mode (also termed as the Kingdom mode) in another article, mainly focusing on beginners. For now, let’s have a look at what the Conquest Mode is all about.

Conquest mode is the replacement of the Free mode in the previous games. The player must play various stages to take over a whole map. The idea is to take an arbitrary officer (yes, you get to choose which officer to play with) and complete “episodes” on the Conquest mode map. The mode gives you the liberty to change your officer any time you want. However, not all officers are unlocked at the beginning, so you have to progress in the mode to unlock new characters. The mode also offers split-screened offline co-op and online co-op game-play.

The idea is fairly simple; Conquest mode contains a giant map of china covered with hexagonal grids. Each hexagon is either a battle scene or a city, and is called an episode. 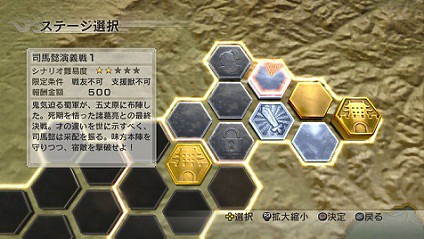 When a certain hexagon or episode is selected, you are given the option to choose which player/officer to play with. However, some episodes have a restriction on which officer you can use for it, whereas others have requirements which you have to meet before you can play them. The hexagon will turn golden in color once the respective episode has been completed, and will unlock neighboring episodes which will turn silver.

City hexagons can be accessed to begin your exploitations. Some cities are unlocked and accessible in the start, whereas others have to have their ‘City Gate’ unlocked by completing a neighboring/connecting episode. Within a city you will find many facilities that you can access to enhance your character. The following are available inside the cities:

Blacksmiths: Blacksmiths will allow you to fill the Seal gauge for your weapon based on your performance in previous battles.

Merchants: You can purchase weapons or animals to assist you in battle from merchants. Moreover, merchants also sell the services of officers to assist your character in battle.

Scholars: Scholars are uncommon NPCs that will take a trivia from you regarding the Three Kingdoms. If answered correctly, they will reward you with either gold or certain items.

Tea Houses: Tea Houses are areas where you can manage your animals and aiding officers. You can select which animal or officer will assist you during battle from here.

Weapons Dealers: Weapons Dealers are places where you can create new weapons. The more cities you gain control of, the higher the ability to create newer and better weapons.

Entering a battle in Conquest mode is done by selecting a certain episode, selecting your character and then jumping right in. The details regarding each episode, such as limitations, amount of gold or weapons earned, difficulty etcetera can be viewed on-screen on the HUD.

Each Battle episode or hexagon has a specific set of objectives, and some also have limitations to allies and the officer you choose to play with. The hexagonal icons depict the type of battle it is representing. The following are the different types of battle episodes or hexagons:
City Gate: These are battles which, once accomplished, unlock the nearest locked city for access.

Guardian Animal Hexagons: Completing these battles will unlock a new guardian animal which you can select from the Tea House to accompany you in battle.

Legend Hexagons: These battles or episodes are missions for specific characters, which offer side-stories for that character.

Weapon Hexagon: These battles, once finished, will unlock a random weapon for your character.

Rare Weapon Hexagon: These episodes, once finished, will unlock each character’s Special Weapon, which will be specific to that character. For more information regarding the Special Weapons you can view our Weapons guide.

Status Hexagons: These stages will earn you money and enhance your character’s statistics.

Well that’s pretty much it for Conquest Mode. It’s quite a simple yet fun mode to play, and the taste of success and progression can make it extremely addictive. What are your thoughts on it?