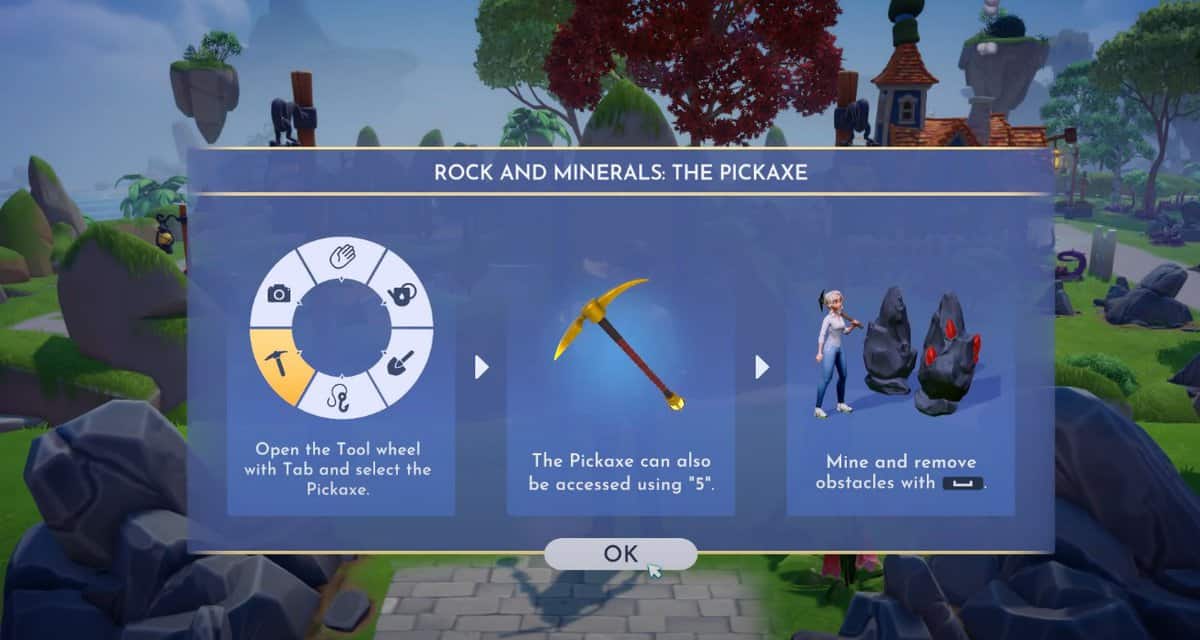 Kicking things off in Disney Dreamlight Valley, you will be introduced to the magic and we all know that Disney without magic is a star with no shine – pointless but don’t become too reliant on magic because not everything will be solved with magic.

You will have to return to the conventional ways at some point where you must get your hands dirty and use the tools mankind has been using since the start of time.

During the early quests in Disney Dreamlight Valley, you will be tasked to collect some tools known as the Royal Tools that will help you in your journey of lifting the curse of the Dreamlight Valley.

There is a total of four tools spread throughout the valley, details of which are given below.

We will be covering these locations in the order that you should be collecting these tools in because of certain prerequisites that tools later in the list require.

Where to find Pickaxe

The first tool that you will be collecting is the handy-dandy Pickaxe. Pickaxe will help you mine minerals and gems. Along with that, it will help you clear the obstruction in your path that you may encounter.

Now we know how important the Pickaxe is so let’s see where we can find it. The Pickaxe is stuck in a glowing rock which is towards the southeast of the entrance of The Plaza and just behind the house where Scrooge McDuck is standing.

Once you find and pick it up, a beam of light will shoot up in the sky and the darkness that once surrounded the valley will be cleared and the day and night cycle will officially start.

Plants and crops are living, breathing beings that require water, and what better way to water them than with a watering can.

The Watering Can is a Royal Tool that can be used to water the plants and crops in Disney Dreamlight Valley.

Finding the Watering Can is easy enough as it is located right behind the house where you helped Merlin clear the thorns. It will be hidden behind a rummage of broken barrels that can be cleared with the Pickaxe.

The third Royal Tool, the Shovel, will be standing right out in the open but if you are not looking for it, you might miss it.

The Shovel will be standing tall right next to the Chez Remy restaurant from the movie Ratatouille, towards the northeast of the Plaza.

The Shovel is much like a pickaxe but only serves the purpose of clearing any obstructions that might come in your path and can also be used to dig a hole whenever needed.

How to use Fishing Rod

The fourth and final Royal Tool is the Fishing Rod which is the only tool that cannot be used right off the bat when you collect it.

You will only be able to grab the fishing rod if you have the pickaxe already. To collect the fishing rod, go south from the Plaza and through the Peaceful Meadows.

In the Peaceful Meadows, you will find a small pond, and right beside the pond will be the fishing rod.

The fishing rod will be broken and you will have to take it to Goofy who will help you fix it before you can use it to fish for various resources.