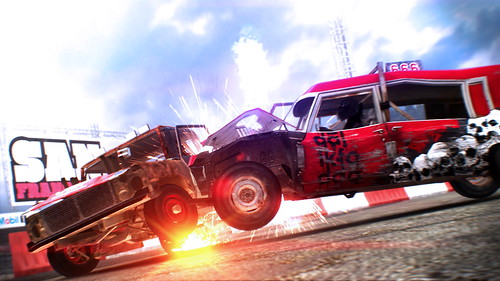 Dirt Showdown is the latest installment in the franchise and like all other games, it may not like your PC and refuse to work properly. If you are one of the unlucky ones, this Dirt Showdown Errors and Fixes guide will help you.

So, if you are facing any problem, you can refer to the list of following problems and their possible solutions, which have been reported commonly by most users.

#1 SLI not Scaling Well
The problem may be due to the water effects in some tracks. So if you are facing poor performance, then lowering down water to the medium can solve the issue for you.

If that doesn’t work for you, you can also try this solution tried by the user.

#2 Dirt Showdown Bottlenecks the PC/100% Usage
This was a common issue reported in Dirt 3 and since it’s the same engine, many users are encountering it again. It does not have a permanent fix, but if you are desperate to play it as soon as possible, follow these steps:
In-game Vsync is on. Turn it off.
Alt+Tab to minimize the game and then switch back to the game
Turn Vsync back on.
Alt+Tab again and now it won’t minimize anymore. Your CPU usage should be reduced and if does not work, try Alt+Tab for two more times.

The setting will last until you are in the game and when you quit back to the desktop, you will have to repeat the procedure. I know it’s crazy, but it does work. Hopefully, Codemasters will do something about this bug soon.

#3 Unexpected Crash
Again, the problem is related to the water graphics effects. If the game crashes even at medium settings, set them to low and the game should not crash after that. Furthermore, make sure that you are using the proper drivers, not any unstable version for your GFX.

#4 Can’t Update through Windows Live – Error 0X800B0003
This is because XP cannot download the file bigger than 500MB. You need to download an update manually. Follow the link for more details.

#5 How to get Global illumination On
Find the settings.cfg file in “My Documents” and edit the global_illumination=”true” to turn it on. If you want it to revert back, change the value to “False.”

If you are facing any other issue or have a solution to any problem you encountered, let us know in the comments below.