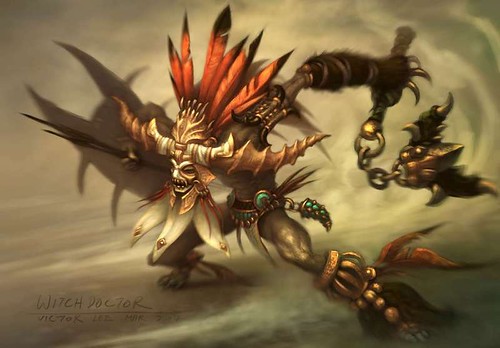 Home of Witch Doctors is the Toranjan Jungle. In Diablo II, we had a Necromancer class which is similar to the Witch Doctor but is not meant as a replacement by Blizzard. The Witch Doctors can draw power from an alternate reality they call the Unformed Land.

They can use this power to curse their enemies. In addition they can raise the dead and manipulate them in fighting for them.

Firebomb: The witch doctor throws a firebomb which explodes on landing causing massive damage in a radius.

Horrify: The witch doctor releases his magic and caues all enemies around him to flee in fear.

Locust Swarm: The witch doctor releases a swarm of locusts that destroy all nearby enemies.

Mass Confusion: The witch doctor temporarily causes his enemies to start fighting one another.

Soul Harvest: It kills all enemies in a radius and converts their hit points into mana for the witch doctor.