Diablo 3 Keywardens Guide – How to Defeat 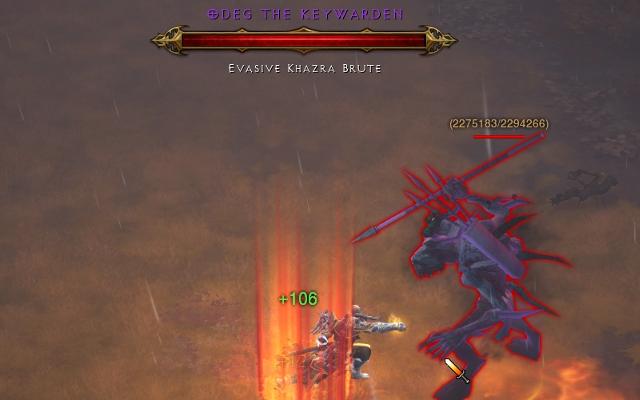 The first thing you should know is that the Keywardens were added to the game in the v.1.0.5 patch update.

The Keywardens are some peculiar enemies in Diablo III, which make appearance during all four acts. There are a total of four Keywardens and each appears during each act of the story. Read below to know where to find these bosses and how to defeat them effectively.

For more help on Diablo 3, read our Leveling, Legendary Items and Crafting Guide.

Odeg appears in the Fields of Misery during Act-I. He is often depicted as Evasive Khazra Brute as he is colossi lance throwing Khazra. The key he drops is called as Key of Destruction.

Attacks
Odeg will basically attack you by throwing his lance towards you followed by three gigantic fireballs. These fireballs have a peculiar arrangement and will cover most of the area.

How to Defeat Odeg
The best way to tackle this enemy is to lure him in an area which has no or minimum number of regular enemies! This will allow you to shift your entire focus on Odeg without having to worry about regular enemies.

The damage done by Odeg entirely depends upon your Monster Power Settings. Know your play-style and see how much damage does his fireball and lancer do to you?! Ideally speaking; you should have at least a chunk of health even if you have been hit by both of his lance and fireball.

And as I have mentioned above; this enemy can evade your attacks quite easily. Try to freeze or stun him to execute your own attacks easily. However, in case of long-ranged characters; just keep avoiding his attacks while doing yours!

This enemy appears in Dahlgur Oasis during Act-II. Often depicted to as Wielder of the Restless Wind, the key this enemy drops is called as Key of Hate.

How to Defeat Sokahr
Like I mentioned earlier, it is always a good idea to lure these special enemies into areas where there are no or minimum regular enemies are present. Things will certainly go in your favor if you take on him alone.

Unlike other monsters; the mortar shots Sokahr throws at you at much more well aimed and without long pauses. Another thing to keep in mind here is; if you see him swirling around you; it means he will execute a spinning attack soon. So, be prepared for that!

While executing the spinning attack, he will try to maintain his distance. Use your Freeze and Stun attacks to slow him down. Attacking with your missle attacks while he is spinning will deal massive damage to you as those attacks get deflected. So, the missle attacks should only be used when you are really close to him.

And in case, he becomes a little too hard to defeat; check your Monster Power Settings!

Catapult Section of Stonefort during Act-III will have Xah’Rith. He is also depicted to as Tormentor of the Damned. The key that he drops is called Key of Terror.

Attacks
Xah’Rith will summon frozen cadavers from the sky who will hurt on contact. Along with that, the area under the effects of these cadavers will also slow down your character’s overall speed. And finally, it will also attack you with a frozen cloud.

How to Defeat Xah’Rith
Owning to his teleport ability, this enemy will dodge most of your characters. So, it is better to freeze or stun him, in order to launch a few good hits. In case of a melee character; he will tend to shove you away if you get too close to him but you can always give it more shots!

However, the frozen cadavers can be really annoying. Especially, if you don’t know how to evade them. The best thing to do here is to dash to the edge of the combat zone. And you can always decrease the Monster Power Settings.

Nekarat appears in the Silver Spire during Act-IV. He is also depicted as Seething Chaos and unlike other Keywardens; it doesn’t drop any key. However, there is a chance that he drops the plans for ‘The Infernal Machine’.

Attacks
The basic attacks at Nekarat’s disposal are Jailer and Knockback affixes along with a Healing Curse which reduces the effects of healing by 75%.

How to Defeat Nekarat
Nekarat is easily the hardest Keywarden in the game. Pro tip of the day; try to take on him with a couple of friends.

One of the key methods to destroy this Keywarden is by maintaining a safe distance. His most damaging spells work more effectively if you are in a close range!

Furthermore, try and use freezing attacks as much as you can! That would provide with an opportunity to launch some good damaging attacks. He will also have a charging ability; however, you can slow/stun it even from a distance.

And as for his most damaging attacks i.e. Fiery Damage, it can be endured with a health potion or if a Monk heals you at right time. Keep on repeating this and you will get rid of it in no time.