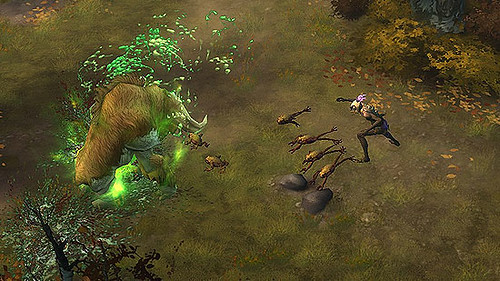 Diablo 3 will retain the iconic characteristic of the series of having the largest variety of items in RPG games.

While it’s something veterans are quite well aware of, newcomers should understand the various item concepts and item types in the game.

In this guide we’ll go over the general item types and their functions in Diablo 3, and also look at what’s different in this game as compared to Diablo II.

Items can be classified into the following types:
Equip-able items

Bracers: Bracers cover your character’s forearm and give general armor

Belts: Belts give your character slight armor and storage ability

Pants: Pants cover your lower limbs and pelvic region and give decent armor

One-Handed Weapons: These include a variety of weapon types that can be used with one hand. The types of weapons in this category are:

Two-Handed Weapons: These include a variety of weapon types that require both hands. Once equipped, you cannot equip anything on the off-hand. The types of two-handed weapons are:

Amulets: A single amulet can be worn on the neck for added stats

Rings: Two rings can be worn on the fingers for added stats

Gems
Gems can be inserted into socketed items for added effects. The types of gems are:

Recipes and Plans
Recipes are required for crafting various types of materials. Plans on the other hand are blueprints of crafting a certain material which can be learnt by the Blacksmith/Jeweler.

Dyes
Dyes play the aesthetic role of changing the color of a single piece of equipment. Dyes come in a large variety of colors.

Potions
Potions in Diablo 3 are restricted to Health Potions only, which replenish a specific amount of your lost health, depending on the potion grade. The potion grades are:

All of the classes in the game have three types of items that are completely unique and exclusive to them, i.e. they cannot be equipped by any other class.

The class-specific items for every class are given below:

Cloaks: These are replacements of Chest Armors, exclusively for the Demon Hunter and granting large amount of armor.

Hand Crossbows: Exclusive single-handed Crossbows for the Demon Hunter. Can be dual-wielded.

Quivers: Exclusive off-hand items that give certain stat boosts or added effects to the Demon Hunter.

Spirit Stones: Exclusive helms worn by the Monk that give the class added effects and bonuses.

Fist Weapons: Melee weapons exclusively available to the Monk. Can be dual-wielded.

Daibo: Large two-handed weapon used by the Monk who’s both ends can be used to strike enemies.

Ceremonial Knives: Small knives exclusive to the Witch Doctor which give added effects and damage.

Voodoo Masks: Exclusive massive helms for the Witch Doctor which give armor and buffs.

Wands: Wands give base weapon damage and added buffs to the Wizard.

Wizard Hats: Wizard Hats are exclusive helms for the Wizard which give armor and buffs.

Orbs: Off-hand equipment which give massive buffs and added effects to the Wizard.

All Equip-able items come in different qualities, indicated by the color of their names and tag.

Damaged/Irreparable: Items that are either damaged or cannot be repaired once damage. These items are colored grey.

Normal: These are standard items, and indicated by white color.

Rare: Rare items are hard-to-find items with large value and some sort of magical effect. These are colored yellow.

Legendary: These are the most exceptional and powerful items in the game, and have strong stats with significant magic effects. They are colored orange.