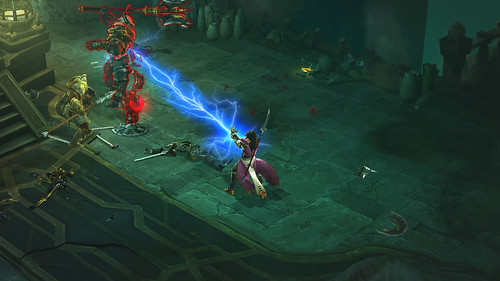 When we Diablo addicts mention the term ‘farming’, we don’t mean cultivating acres of land and growing crops on it.

However, this does not mean that farming is an exclusive luck-based process. Actually, it is, but the fact that you can reiterate your monster slaying habits for indefinite intervals means that you are bound to have an acquaintance with Lady Luck at least once or twice.

For more help on Diablo 3, read our Crafting, Builds and Tweaks Guide. In this guide we’ll go over some of the more well-known places in the game where you have better chances of efficient farming.

But first, here are a few factors to look into:

Bosses or Elites?
As is the case with items, there are multiple types of enemies in this game, ranging from normal demons to rare enemies to unique bosses.

Each of these enemy types has a specific kind of farming probability and quality. These are:

Now, contrary to what may seem as the obvious winner amongst the above types, the Rare and Elite enemies considered by the community to be the most efficient high-quality item droppers in the game, even above Bosses.

Why is that? Well, because you are more likely to run into such enemy types than you are to run into a single unique boss (which is just once per quest attempt). Because of their high-spawn rate and the capacity to drop rare items, these should be of higher preference than bosses.

The only problem though, is the randomized spawning of these enemies, which makes repeatedly successful farming iterations almost impossible.

You’ll find plenty of Damaged/Crude items along with Normal items, and they’ll almost always be the ignorable/sellable items.

It’s the Magic and Rare items that you should be looking out for. Some Magic items are actually even better than many Rare items, but that’s just ‘some’ and based on randomization. Generally, Rare items will almost always be more superior.

Legendary Items and Set Items (together called Unique Items because of their one-of-a-kind appearances) are in a league of their own; they’re drops are completely random.

It is often a misconception that you are more likely to find Legendary Items on higher difficulties than in lower ones. Though that may have been the case in Diablo II, in Diablo III the randomization of Unique Items makes their drop unpredictable.

There are many folks who have found Legendary Items within the first 10 levels. There are even more who have completed 3 Acts of Inferno with over 70 hours of gameplay without encountering a single Legendary/Set Item.

Conclusion: Don’t even think of trying to farm for Legendary Items – it’s completely based on your luck.

Gold farming is much simpler than item farming. It is the rule of thumb that as you play in higher difficulties the amount of gold drop by enemies will increase by large proportions.

Gold drop also increases with the type of enemy you are facing – Elites, Rares and Bosses will drop much more gold than Normal enemies.

The Treasure Goblin is an interesting little creating that can give you lots of gold, especially on higher difficulty. Sadly, Blizzard has patched the game so that you’ll encounter him much less often than you could before, but the probability is still quite high.

The Treasure Goblin only runs. Sadly, he’s ultra-fast, and is immune to stuns. If he runs away far enough, he’ll open a portal and jump through it, hence disappearing. Nevertheless he’s still quite easy to corner, and beating him up will make him drop gold.

He’ll even drop gold as he moves around after being beaten up, but the best output is when he’s killed, in which case he will drop lots of gold and high quality items.

Though just about anywhere in Diablo III is quite fine for farming, some places tend to be much better havens than others. I’ll mention the areas, and also briefly mention why and how to farm in them.

Cemetery of the Forsaken
This is in Act I. The reason this place is highly valued is because there’s a relatively good chance of encountering a large Rare enemy here, along with regularly rising skeletons.

Killing the Rare enemy can obviously get you plenty of rewards, and because of its high spawn probability, you should visit the area regularly for farming gold and items.

Cathedral
The Cathedral is overall an absolutely awesome dungeon to farm like insane in, but even inside the massive building there are a few selected spots that players have recognized as the wealthiest areas for farming. One of the highlighted areas is right where you face the Skeleton King, while the other is the Waypoint in the Cathedral Gardens.

I’ll explain both of these:

Skeleton King Area: This is where you have to fight Leoric after placing the crown upon his head. But the trick to this area is to NOT place the crown on his head, and instead break each and every tray, urn, barrel or other breakable material you find. Once you do that, exit and re-enter, and you will start over and can repeat. This works best on higher difficulties, and is more suited for gold farming rather than items.

Cathedral Gardens: There’s a chance of a chest appearing in one of the corners of the area, and also a Rare enemy. Many people have actually stated they’ve attained a Legendary Item once from the chest here.

Once again though, I suggest not looking around in this area with Legendary/Set items in mind – they’re just based on luck. The Rare enemy should help a lot too. Keep exiting and reiterating until you find some good items.

Fields of Misery
In every act exists at least one very large and open region that you can farm in for an indefinite amount of time. The Fields of Misery is such a region for Act I.

It’s a very large and vast area with a few caves/dungeons to explore, and you’ll likely bump into packs of Elite enemies and Rare monsters. I highly recommend coming to this area in higher difficulties, as both gold and items are available here.

Dahlgur Oasis
This is another very large and vast place to farm, provided you can see here. Though the visibility is poor because of the darkness and the general color, one can’t miss the Rare Fallen Shamans and groups of Elites that lurk in this massive area. There’s plenty of variety in this place; make sure you avail it.

Desolate Sands
This is Act II’s large and open region, with 2 mandatory and one optional dungeon. This place is absolutely massive, and has a vast variety of enemies in it.

With vast variety obviously comes danger, but those who understand the risks and rewards can venture across the Sands and kill off the countless demons that occupy it. There are, once again, a large number of Elites and Rares in this area, and hence it is a farming haven.

Skycrown Battlements
This place has loads of enemies and elites, but there isn’t much that makes it a better farming area than the other average areas, except for the Demonic Hellbearer.

The Hellbearer will vomit out enemies like crazy, and though they’ll be Normal variants, you can attain a foolishly large amount of gold from them. Just ignore the Hellbearer and let it continue spitting enemies at you, while you commit mass murder of freshly, uh, disgorged hell-spawns.

Fields of Slaughter
This is Act III’s massive region ideal for farming. You’ll find some fairly difficult monsters here, of which the more troublesome is the Herald of Pestilence. Nevertheless, you should find enough other Elites and Rares to fill your desires of farming here.

Heart of Sin Dungeons
Though many find the Heart of Sin an average dungeon, I managed to obtain some of the best items in this area during my first play through. The only demand is thorough exploration of all its levels. There are many Elites here to kill, but be careful of the Elite Succubus, especially if you are a melee damage dealer.

They curse you with Iron Maiden – a notoriously powerful ability that returns a large part of the physical damage you deal to enemies to yourself. Apart from that, kill everything you find, and search every corner, and eventually you should find some great things here.

Gardens of Hope
Both the first and second tiers of Gardens of Hope have massive amounts of enemies. However, I noticed there is a slight lack of Elite monsters in this area. Nevertheless, the sheer number of foes is enough to have you collecting large amounts of gold and decent items.

The Silver Spire
The Silver Spire 1 and 2 are dungeons, and are the main large areas of Act IV, which is, mind you, a very short and small act. You’ll find a huge variety of enemies here, from Mallet Lords to Corrupted Angels to Hell Witches.

You’re also bound to find Elites and one or two Rare enemies here as well, and those are obviously your main source of great items. Gold will come naturally here, especially if you are playing on harder difficulties. Enjoy the earnings, if you can survive the methods.

If you have any other methods and locations of rapid Gold and Items farming, please share with us by commenting below.