Devil May Cry 5: 10 Things That Will Spice It Up 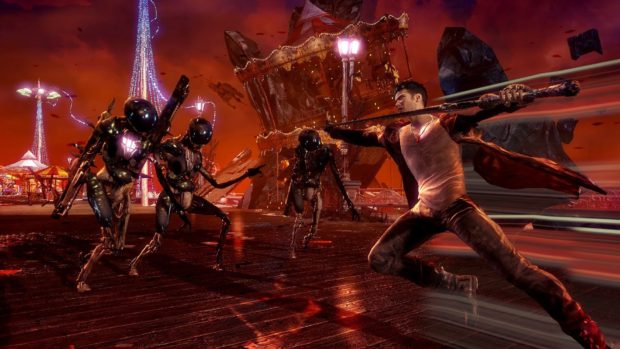 Devil May Cry franchise has been quiet for a while but not for long. With the exception of Devil May Cry 4 remastered edition that released almost 3 years ago, Capcom is yet to revisit the series this generation. A recent report suggests a sequel will emerge soon, something we’re very excited about.

All in all, with all this time that has passed, we expect a better than before Devil May Cry game and for that very reason, here are 10 things that we believe can improve Devil May Cry 5.

1. Local and Online Multiplayer
Multiplayer is straight up fun, so why miss out on it. It’ll not only increase the chances of co-op but the replayability of the game becomes better. However, keep in mind that you wil need more than one playable characters for more local and online multiplayer.

2. Voice Actors
Characters and their voices play a big role in a game like Devil May Cry that thrives on long cutscenes, snark dialogues and comments. Therefore, a veteran voice actor only makes the experience even better. With the latest leaked information about Devil May Cry 5, fans are enthusiastic to know that Reuben Langdon will reprise his role as Dante, Johnny Young Bosch will reprise his role as Nero and Dan Southworth as Vergil.

3. Missions Increased
The first Devil May Cry had the most number of missions, being 20 in total with 21 secret missions. Having said that, Devil May Cry 5 must introduce the same level of missions, if not less. It only makes it a lot more fun for dedicated players to go through each level with varying difficulty levels.

4. The Return of Dante Must Die
On the note of difficulty levels, players enjoy insurmountable challenges as long as they’re engaging and fair, like Dante Must Die modes from Devil May Cry 1 and 3. If Devil May Cry 5 offers the same level of a challenge then it’s all good in our books.

5. More Playable Characters
Devil May Cry introduces more than one playable character like in the second installment, we could play with Dante and Lucia, in the third, we had Vergil available alongside Dante, and Nero plus Dante in the fourth one. The only problem was the repetition and backtracking. You played the same missions with just different characters. We hope to see characters with their own array of missions to complete.

6. No Microtransactions
Microtransactions are the latest taboo in the gaming world. What will make Devil May Cry 5 stand out immediately is the absence of voluntarily pushing the need to make in-game purchases? Although, both the reboot and the special editions have gone down this road but let’s change routes now and don’t go down that bumpy road again to put content behind paywalls.

7. Good DLC’s
A delayed production of post-release content is definitely welcomed but the only condition is for it to be good like Horizon Zero Dawn or Dark Souls DLCs. The benefit of a good DLC is that it gives you the opportunity to practice game mechanics and get better at it, especially with a game like Devil May Cry that has deep mechanics.

8. Better Enemies
In Devil May Cry 4 and the reboot, enemies vary from being annoying to boring. We expect better enemies in the upcoming installment, hopefully along the lines of Credo from Devil May Cry 4 who presented with an interesting challenge as he was neither frustrating nor boring. That’s the take on enemies we want, if not a completely overhauled one.

9. Expanded Mod Tools
Modding lets players contribute content to their favorite games. Mods exist for all Devil May Cry PC versions but on the whole, they’re only cosmetic changes. An open and extensive game directory shouldn’t be out of the question since it is a fun gateway to allow extensive content that includes mechanics, moves, and even enemies by utilizing the community’s skill set. We have Skyrim as a great example of modding and Devil May Cry 5 should let console players have a bite outta that pie, too.

10. Training Modes
Playing Devil May Cry is hard. If you wanted to train then you had two options: you either use a trainer or restart a mission. Not very convenient of options and on top of that, they are only exclusive to PC. Console players had no such choice. Capcom should introduce a full-fledged training mode with list of moves and also the choice to train against in-game enemies.

We hope to see these improvements in the upcoming Devil May Cry 5 that was teased to be in a climax stage by creator Hideaki Itsuno in a new year greeting tweet. Let us now wait a little more for this long-awaited game.