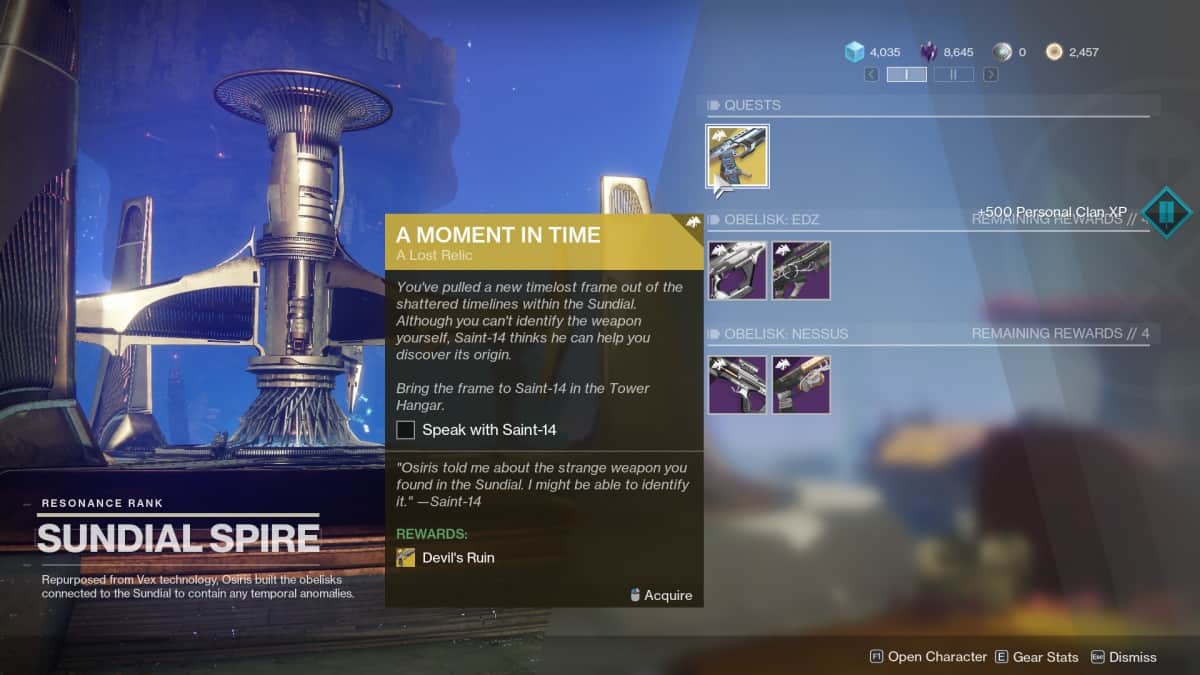 The quest for the latest Destiny 2 exotic, Devil’s Ruin is live. This Destiny 2 Devil’s Ruin Exotic Sidearm guide will help you through the process of acquiring the weapon.

There is a whole quest that you have to follow through to get this weapon as your reward. The name of the quest is “A Moment in Time”. This time the weapon quest is a bit different as the game doesn’t actually tell you about the quest being active or the quest existing at all when you log in after January 7.

Lucky for players, this guide won’t have you searching all over the place. Just head over to Mercury and complete the Sundial Activity. Now fight your way through the completion of this activity. It won’t matter how good you do, just that you complete it. After completion, you will see the Devil’s Ruin Exotic frame sitting at the top of the rewards screen.

This grants you the quest to get the exotic sidearm Devil’s Ruin. Head on over to Saint 14 to start the quest. Saint 14 will direct you to Twilight Gap to collect 10 weapon parts. When you open your director, you’ll see a new mission called Parts Long Lost on the EDZ.

Now, this part is quite simple, all you need is to walk around looking for robotic bodies strewn around the map, which have the Crucible logo on their chest. Interacting with them gives you a weapon part, you need to find 10 weapon parts. The map is small and the weapon parts are easy to locate.

Once you’ve found all 10 robots, you’ll get the Devil’s Ruin Exotic sidearm. If you want to stick around and listen to Shaxx, Osiris, and Saint-14 chat about their old days, don’t leave the mission. A little lore never hurt anybody.

The Devil’s Ruin sidearm comes with two major perks, Close the Gap and Pyrogenisis. Close the gap, allows the gun to fire normally when the trigger is pressed normally while it converts into a staggering laser blast if the trigger button is held for a short while.

Pyrogenisis allows the gun to automatically refill ammo from the reserves after you fire a fully charged laser blast successfully.

A good combination for both close and long-range, you can fire normally for enemies that get too close while switch to its laser functionality for long-range at it literally melts anything in front of you while it also staggers Unstoppable champions. The laser beam also puts down Fallen Captains with their big shields.

In PvP, it’s difficult to use as the charging the beam exposes you to enemy fire but if you manage to land the blow, it is devastating for players’ opponents. And the firing mode versatility will help even out the range differences at which to use.