Denmark Becomes First Country To Be Recreated in Minecraft

There is absolutely no question about the popularity of Minecraft. What started as a simple video game that lets you build some of the amazing Worlds using your creativity has now become a cultural phenomenon and can be found almost everywhere, be it in your school part of your curriculum or a work of inspiration for your friends on your Youtube Channel.

Now the employees of Geodata, who are responsible of managing the Geological data and maps are taking it on a whole different level by creating the whole country of Denmark into the game.

Yes, you read that right; the model of Denmark is ready to be explored in Minecraft with the ratio of 1:1. However, this model will take up 1TB of your hard disk space, if you decide to download the whole map.

Two of the Geodata Employees ‘Simon Kokkendorf and Thorbjørn Nielsen took the data that was publicly available regarding the elevations, roads and buildings of Denmark and managed to put that in the game, which now consists of “4000 billion bricks”.

Check out a couple of screenshots below to get an idea of the effort that has been put in: 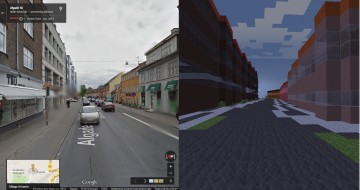 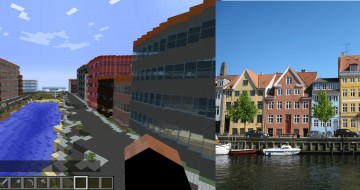 Denmark is the first real country to become part of Minecraft and a lot of people will be inclined to download the model because they have already seen a number of fictional worlds in the game.

If you want to get the details on how to download the maps, you can visit the official website of Danish Geodata Agency.

What do you think of the real country being added into Minecraft? Do you think it is the start of something new for the game?