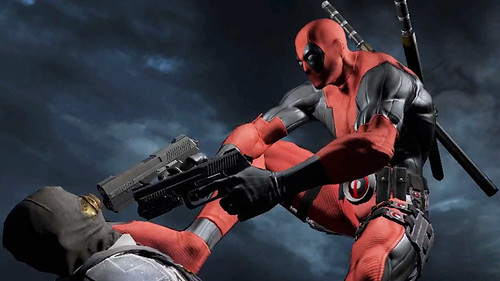 Activision has announced that the current writer for Deadpool’s on-going comic book run — Daniel Way — will also be doing the honors for the Deadpool game.

In a rather ingenious move, Activision’s press release makes it out so that it seems like Deadpool himself wrote it.

Supposedly, head of developer High Moon Studios Peter Della Penna claims that “Deadpool came by the studio one day, said he was taking over, and that if I didn’t hire Marvel writer Daniel Way pronto and make the most amazing Deadpool video game, he’d break both of our arms and beat us to death with them. I have kids, so we’re making the game.”

“Deadpool” also adds, “My Deadpool game will feature all of my favorite things – katanas (check), big guns (and not just these amazing arm muscles) (check), crazy poop-your-pants action (check), hot chicks (check), maybe some of my X-Men friends (well, depending on what they’re wearing), burritos, bouncy houses and of course ME!!! (check) (check) And check!”

Way better than the usual cookie-cutter press release, no?

Deadpool will be out next year for the PC, Xbox 360 and PS3.